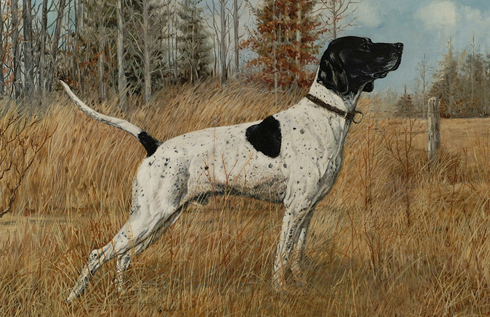 The date of Luminary’s win will be officially recorded as of Tuesday morning, March 10, 1942. But in the opinion of many who braved as adverse a bird-finding day as ever faced a brace of dogs, the magnificently conditioned, courageous Luminary drove through to victory on opening morning of the trials, Wednesday, February 25. Scheduled to start on Monday, the 23rd, rain, snow and sleet held up proceedings for two days. Wednesday arrived with brickbat underfoot and dull, aching cold.

It was a prospect to strike terror to any handler’s heart, the kind of going from which 95% percent of all bird hunters would recoil. But, like the play, a field trial must go on, and handlers like Clyde Morton and Dewey English, with Luminary and that splendid animal, Freebooter, in charge respectively, faced the issue with fortitude. Such men know the game and shoot fair. Loving their dogs, they have faith in and respect their courage. We have watched field trials a long, long time, and here was the call to raw courage. The dogs were ordered on.

For two mornings the handlers had been given starting option. Morton and English are not the type to blink. The gallery wound its way across drab, winter stricken terrain. Freebooter scored first, handling well a bevy racked up in a thicket-head. Made a swell job of it, too, and English’s gun spoke. It was eight minutes before Morton, between the first and second roads, was sighted waving his hat.

A wild ride and there stood Luminary, embedded in high sedge and sapling stalks. Failing to dislodge game, Morton ordered him on. The barrel-chested, lithe-hipped pointer made short work of the relocation chore. Clyde’s gun evened up the score, and Luminary departed thence. But again it was the worthy Freebooter who tallied, on top of a sedge pine knoll. He had ’em too, and just like the rulebook said…

They exchanged right and lefts, so to speak, on single-bird points from that find. Honors were about even and gun manners perfect. Then Luminary really began to go about his business. After a sweep that took him to the country’s utmost bird rims, he was found in the field marking an hour and a half on the course. At Morton’s command the dog did a perfect job of pile-driving relocation. Then he “sold out” far to the right and was not located until several minutes later.

The gallery had long since swung past the creek corner in which the dog was found on a shelf above a high ditch. Birds boiled from about him. Thrown on, he spurted past the crowd. Two hours were off his chest. Freebooter, though tiring, struck gamely. Riding close behind Morton, we were privileged to see Luminary in a surprise contact evoking considerable discussion among those who could not possibly have seen exactly what happened in this case. The dog, coming full tilt off a slope and up through some sparse woods into a mud-floored washout below us, caught scent and literally swirled in putting on the brakes.

We had ridden over to the very brink, not only because we saw Luminary coming in, but because we had seen birds moved from that basin before. And this time we saw the birds scramming off the floor of the place. Morton’s cry of warning wasn’t needed. No dog on earth could have stopped more suddenly or been less open to censure.

And around the corner, several hundred yards away, came another incident that set tongues wagging. Luminary, plunging through a grassy depression alongside the gallery, struck scent. Morton, up ahead, instantly assumed control and was off his horse and hurrying down the ledge, out front. Luminary’s birds were moving swiftly away from there. They ran up a red-earth bank and zoomed almost in Morton’s face.

Again Luminary checked out under a full head of steam. His two next finds, accompanied by a corking Freebooter location, came on the two last broad turns of the course. They were masterpieces of relocation, deft approaches, any step of which might have spelled disaster. The last one especially will linger long in the memories of those so fortunate as to witness it. Striking his quarry while on the far side of a wide, shallow depression, Luminary waited impressively until Morton threshed out the brush heaps between his dog and the excited gallery. Then he was ordered on.

Luminary darted up the rim of the sink, crossed it and, literally ablaze with crafty discernment, charged along within twenty feet of the horses. He flung himself at a reef of straw and high-headed seemed to shout, “Here they are!” And they were too. When we passed into the last open spaces of the heat’s end, Morton’s whistles was scarcely needed to reach the winging Luminary. He struck the end of the course under all valves and chased down by proud scouts.

Just then some sunshine struggled through the cold murk. We stooped down with Morton and examined the dog’s pads. They were scuffed, and his toenails were a bit shaky at the moorings. Freebooter was also game to the end; and your correspondents were agreed that they had just seen about the finest heat either had witnessed at the National, or for that matter, on any course.