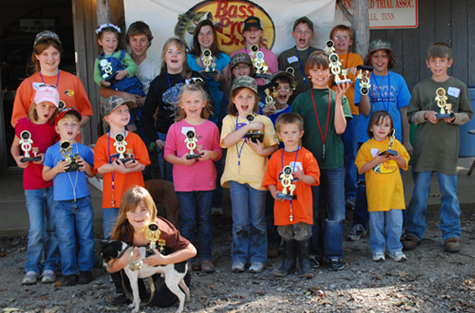 Congratulations to all of this year’s participants in the Bass Pro Shops/AFTCA Youth Trial! Looks like you all had a great time thanks to the support of Bass Pro Shops, the AFTCA and those who gave generously of their time putting on the trial. Hopefully you’ll inspire other regions of the country to put on similar events.

Below is the official report of the trial thanks to Jim Atchison:

Excited children, blowing their whistles and yelling, shared signatures of early October, such as goldenrod and mature lespedeza, in the field on the Currie Farm near Dancyville, Tennessee as the Amateur Field Trial Clubs of America hosted their annual Bass Pro Shops Youth Field Trial on October 3. Linda Hunt, Secretary of the AFTCA and neighbor, Blake Kukar, orchestrated the event with a great deal of help and support from  other field trial enthusiasts. The clubhouse of the West Tennessee Field Trial Club located on the property owned by brothers, Bill and Allen Currie, was the headquarters for the event.

In addition to finding lots of birds, the children, approximately 30 in number, played games, received lots of gifts, had a tracking collar contest, and enjoyed a lecture on training a young birddog. At mid afternoon many of the children adjourned to the nearby Circle B Farm and Kennels of Blake Kukar where they petted dogs and fed them lots of treats, cast sticks and decoys into his lake for the dogs to retrieve, flushed pigeons from his coop, and enjoyed a great outdoor farm experience.

Kent Walker and Joey McAlexander were the judges. They worked the hardest of anyone in the field as the trial was a walking event and they walked every brace. The day was beautiful and warm and the judges got plenty hot before all the braces were completed.  At one time the reporter commented to Walker that tall judges were recruited because they could handle the walking. Walker said, “Yeah, but he (McAlexander) is 20 years younger than I am.” At trophy presentation time each judge told about each entry’s performance and everyone was a winner. Then all the “winners” held their trophies high and got their picture made.

Lots of people helped Hunt and Kukar make the trial a success. Larry and Piper Huffman were in the field with the list of entries, keeping everyone lined up and ready to run in the right order. The field was in excellent shape, having been mowed by Bill Hunt. David Smith from the National Bird Dog Museum kept everyone hydrated with water and soft drinks. Liberated birds were planted by Cleveland Turpen, Lunch was prepared by Randy Smith, Vicki Canale, Penny Smith and Clarice Smith. Vera Courtney brought cookies and was the photographer. Ken Blackmon was in the field all morning and then helped with the tracking collar activity in the afternoon. Allison Williams provided the Garmin collars and trackers. Bud Moore and others helped Linda Hunt and Blake Kukar arrange for items to be given to the youthful entries. Kent Walker, Blake Kukar, and Buddy Smith brought four wheelers. Jim Atchison was the reporter.

Buddy Smith entertained both the kids and the adults in the afternoon with his “Buddy Stick” demonstration wherein he used a length of p v c pipe snapped to a loose collar worn by a young dog to help her learn commands, appropriate behavior, and improved style. The youngster’s performance proved that Smith’s technique works.

Most participants were from the Mid South area, but Lin Kozlowski travelled from Springfield, Missouri to participate in the trial and gather ideas for a trial she and other Vizsla handlers will sponsor in 2010.

In addition to Bass Pro’s sponsorship through their contract with AFTCA, their funding was used for tee shirts and stuffed animals for every entry.  Many other companies and individuals sent items and donations that were given to the kids as gifts and prizes. A contribution of cash was made by Rhonda and Mark Johnson. Other items included bags and dog bowls from Eukanuba, insulated bags from Purina, whistles and lanyards from Michel Berner, VHS training tapes from Lion County Supply, candy from Diana Boggs, National Championship videos from Brad Harter, hat pins from Bob Johnson at B and B Tack, and training videos from Buddy Smith.

The day was full of activity and made lots of kids happy. When asked what they liked best, one said, “Seeing my friend, Lily, again.” Another said, “petting the doggie and getting my picture taken.” Adults had a great time too. Just seeing how much Bobby, Charlie, and Henry grew in one year was a treat.

Everyone left with warm feelings for Bass Pro, the many volunteers of the AFTCA, and especially for the efforts of two busy people who put it all together, Linda Hunt and Blake Kukar.