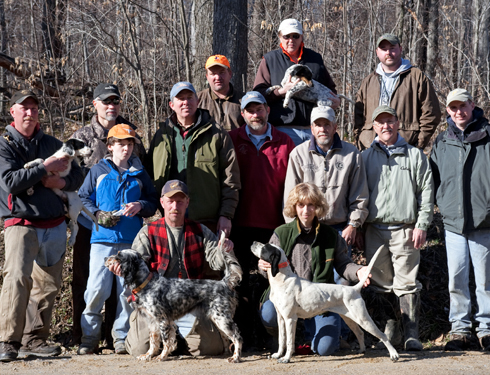 The Black Ash Grouse Dog Club would like to thank judges Frank LaNasa and Dave Hawk for giving so generously of their time and expertise traveling from Minnesota and Ohio, respectively, to look at the dogs competing in the 2010 Armstrong-Umbel Endurance Classic for grouse dogs. Both are men of great integrity who have been involved with the breeding, developing and handling of field trial dogs for considerable time. Both have a great love of and deep respect for this sport and we were most fortunate to have them.

We would also like to thank Dale Hernden, Kim Sampson, Shawn Wayment, DVM and all those who bought Armstrong caps for their support as well as Strideaway advertising sponsors: Industry Leader’s Fund, Purina, TechMix Inc., Tri-Tronics, DOGS Unlimited, and Marshall Radio Telemetry. Their support of Strideaway allowed us to give a donation to the club for the expenses incurred putting on the Classic. Entry fees alone can not cover the  expenses and generous purse the Classic offers.

Six year old Texas Cherry Bomb, handled by Scott Forman, had a consistent and easy handling forward race. She was attractive moving, hunted hard, applied herself maturely and was rewarded with a triple grouse find in her second hour which she handled beautifully. She ran in the second brace on Thursday. The sun was out and though the temperature was in the low fifties, it felt considerably warmer than earlier in the morning.

Five year old Pal O‘ Mine, handled by Joe McCarl, ran in the first brace on Thursday morning. Two grouse lifted from her lofty stance early in the first hour. She, too, ran a mature race requiring, perhaps, a little more handling. She was given a great opportunity to show a strong finish to her two hours which she took full advantage of by racing to and disappearing in a big cut at the far left edge of the large open bowl we finished in.

Shady Hills Bean, who also ran in the first brace, had three separate, well-mannered grouse finds and finished the two hours handling kindly. The judges felt that her last hour was not as independent as the winners. Dogs that finished the two hours strong included last year’s runner-up, Grouse River Ace and kennel-mate, River’s Edge Bella who put down a particularly impressive two hours of responsive handling and hard hunting. Her attractive, sustainable gait allowed her to finish the two hours effortlessly. Unfortunately she was only rewarded with the remains of a dead grouse. An exciting race was put down by Russ Richardson’s Two Acre Hope, a contender in last year’s Classic. She had a great multiple grouse find towards the end of her first hour but crashed soon after when she self-relocated on her next stand while Russ was flushing. Russ mentioned before the beginning of the brace that he was a little concerned about all the Texas quail hunting she had done this past winter. She gave it her all and was particularly exciting to watch!

As usual, the weather had a lot to do with the numbers of birds that were seen over the two days. Russ has the exact count which I will get from him for the report but the first morning of overcast skies proved the best with eleven grouse seen before noon. On three occasions, three grouse were flushed from the same area for dogs. Only one woodcock was seen on the course flushing behind a grouse that got up wild.

I would personally like to thank all those who put their dogs down for this difficult but rewarding challenge. I took a lot of photographs of the running and will prepare a slide show that will appear on the Photo Gallery page next weekend.