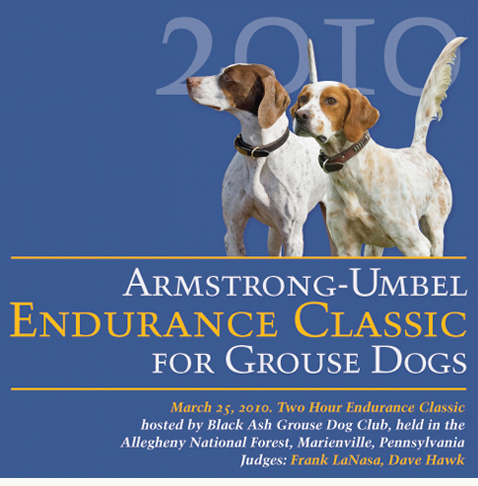 The Black Ash Grouse Dog Club is proud to announce the second running of the Armstrong-Umbel Endurance Classic in March 2010. Heats will be of two-hour duration.

We are proud to have attained the following two judges:

Dave Hawk hails from Southeastern Ohio and has been training and campaigning grouse dogs for the past seven years. He is a life long grouse hunter and has hunted with his own pointing dogs for the past 27 years. He has won with his dogs in horseback, cover dog and other walking shooting dog stakes and amateur championships. His dogs have also won open championships, including the 2007 Wisconsin Cover Dog Championship and R-U in the 2008 Grouse and Woodcock Invitational. He has judged walking and horseback stakes throughout the region, most prominent being the Region 4 Walking Shooting Dog Championship and the National Walking Shooting Dog Futurity.

Last spring’s inaugaral running of the the Armstrong as a two hour classic drew 22 dogs (21 ran). Judges Roger Hoover and Mazie Davis commented on the entry of strong bird dogs — most running well past the hour and a half mark and several finishing the two hours. The Winner and Runner-Up were extremely well-received by all who witnessed their performances. Both were outstanding in their ability to go the distance with strength and purpose. Though birds were at a premium during the running, both dogs hunted objectives, holding the judges and gallery’s excitement for the entire two hours.

Endurance is the ability or strength to continue and maintain a high quality of work despite fatigue, stress, or other adverse conditions; stamina.

Stamina: physical or moral strength to resist or withstand fatigue or hardship; endurance.

Club members and other supporters of the Armstrong-Umbel feel strongly that endurance is a quality we should seek in all field trial bird dogs. By definition, an endurance event evaluates many of the subjective preferences we seek in our dogs today. Does the gait we think attractive also prove to be efficient and sustainable? Do the dogs we find exciting have the mental fortitude to respond well to additional stress? Both these qualities are necessary to keep dogs focused on the task of hunting for and handling birds with class past the hour mark.

Report and other details from last years running are archived under Category: Armstrong-Umbel

For anyone wishing to support the Armstrong-Umbel Endurance Classic, please scroll down to the information on the right side bar on this page.

The Armstrong will be accompanied by the Black Ash Amateur Derby.

Additional details to follow in the American Field ad. Thanks to all who supported the Classic last spring. We look forward to seeing you in March!