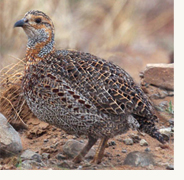 The National Field Trial Championship is the premier event of the Field Trial calendar for pointing dogs in the Republic of South Africa. It is open only to those dogs that have pre-qualified via a seeding system that selects the top 32 dogs from the previous two years of championship trials. This results in only the best dogs in the country competing in a field trial of the highest order.

A panel of three senior judges is selected and appointed by the National Field Trial Association Executive Committee. These judges have the qualifications, experience and practical knowledge of working pointers and setters. Each has to have qualified at least one dog to this level himself during his handling career and be currently competing and judging at top level. Their task over two full days of trialing is to select the winner and deserved placings. Dogs are expected to deliver performances of the highest standard and are eliminated for mistakes and sub standard work. 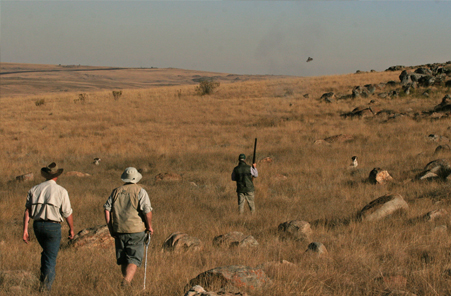 The standard of performance is one where the very action of the dog denotes an interest in his work and he is animated at all times. He must be a credit to his breed in every regard. He is to hunt game independently and intelligently by using the wind appropriately at all times whilst moving with ease and speed and the least exertion. He must have the desire to hunt and point game with fire and intensity that makes his work spectacular and pleasing. At the same time, he needs to be controllable and self controlled. He is expected to cover the most ground in the least amount of time traveling wide, far, fast, or slow and close as the conditions dictate. He is scored highly by the judges for this even though the ground may be barren.The dog’s performance must be complete in every respect showing positive and disciplined manners, game finding ability, pointing manners and steadiness to shot and flush. He is to back his bracemate on point spontaneously without jealously trying to steal point. He must hunt and handle all indigenous game birds and above all, he must be in total harmony with his handler so as to give him the opportunity to shoot the pointed game in a manner befitting sportsmen. This is the measure of a quality dog — how well he presents the game to the gun. It is important to emphasize that the gun used in the National Field Trial is always loaded with blanks — no birds are harmed during the trials and the clubs collaborate with and often assist local conservation organizations. As a result trials are on occasion allowed in pristine conservation areas. 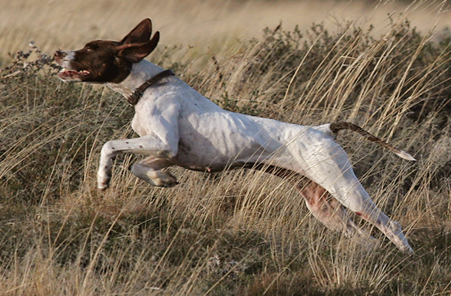 The 2010 National Field Trial took place in Tarkastad in the Eastern Cape Highlands — mountainous upland terrain, with harsh rocky plateaus covered with Karoo scrub and interspersed with wide flat areas of short grassland. The grounds held a good population of indigenous wild greywing partridge (also known as greywing fancolin) with coveys of up to 30 birds not uncommon. These hardy little birds sit well in grass cover but on sparsely covered hillsides and screeds and the flat rock plateaus they tend to run and are very skittish. Only the most experienced dogs can handle situations when the covey splits up and single birds need to be located one by one by the dog. The ultimate test for pointing dogs is to locate, point, hold (without putting undue pressure on the covey and accidentally flushing them), and then present to the handler on command is the ultimate performance.

The judging panel decides on the durations of the rounds, usually 10-20 minutes. The dogs are drawn in pairs and are run as a brace. Dogs are eliminated from the stake when they commit an eliminating fault or an accumulation of penalizing faults. The surviving dogs are then repeatedly redrawn in successive rounds until such time as the judges are satisfied that they have given each dog a fair chance and they have no doubt as to the winner and the order of the top placings.

An enormous distance is covered each day (18-25 km) by the judges who have to keep up (on foot) with each brace and be in attendance when the pointing work is being done.

The overall standard of the 2010 Nationals was of the highest order, producing performances of excellence which were duly rewarded by the judging panel, comprising of : Mr. Neil Evens (Border); Dr Karl Aadnesgaard (Natal); and Dr. Dieter Nischke (Natal). 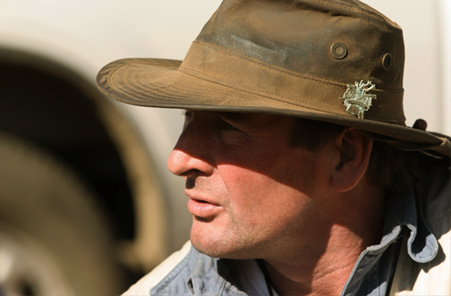 First place went to liver and white pointer dog F.T. Ch Mountain Valley Ranger (“Ranger”) owned and handled by Mr. Luke Bell of Dordrecht. Ranger produced a fantastic performance of the highest quality over the two full days of the trial. He hunted with purpose, range and ease, always using the wind, and showing extreme fitness and stamina. He was independent yet in full harmony with his handler at all times. On the first day he located a covey high on a steep slope, to staunchly hold the point until his handler and the exhausted judges got to him. On command from Luke he duly quested with speed and control, located and pointed each single bird (the covey had run and split up while the judges labored up the slope), and remained steady to flush and shot on each of the eight birds produced. He did not leave a single bird behind. The next day he repeated this performance. He backed his bracemate when the occasion demanded it, and over the whole trial incurred no penalty. A champagne performance of the highest standard deserving the honor of being crowned the National Field Trial Champion of 2010 and South African Dog of the Year. 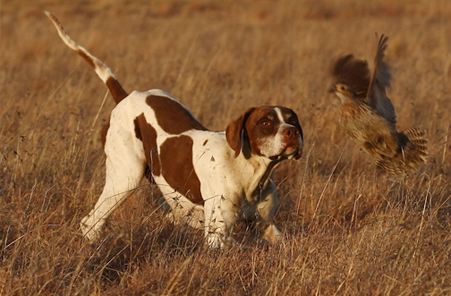 Second Place went to an excellent liver and white pointer dog, Northwell Reno (“Fly”) owned and handled by Mr. Johnny Morgan of Tarkastad. He produced an excellent performance and only had one blemish.

The first Certificate of Merit went to a liver and white pointer bitch, Lowestoffe Nikki (“Nikki”) owned and handled by Mr. John Miller of Cathcart.

The second Certificate of Merit went to a liver and white pointer dog, Winston Bana (“Bana”), owned and handled by Mrs. Karen Hart of Cathcart. 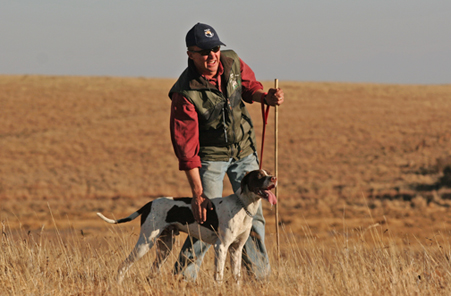 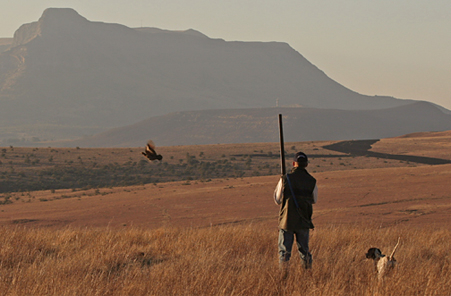 Both photos: Owner/handler Luke Bell and the Champion, Ranger. 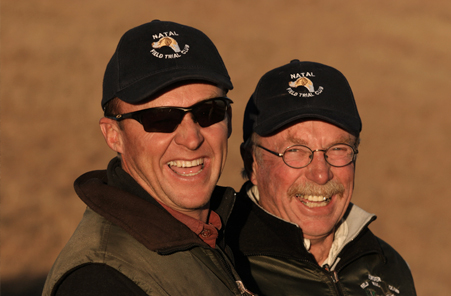 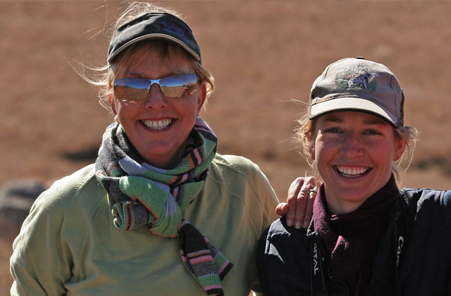