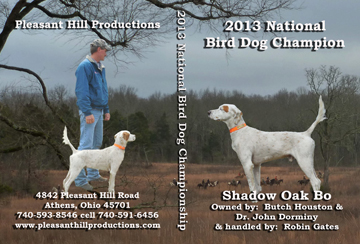 Once again, Brad Harter has produced a professional quality video of the National Bird Dog Championship. Each year they get better, thanks to improving technology and Brad’s and his colleagues’ building experience.

This one is sure to be a collector’s item, for it presents the performance of the first setter winner in 43 years, Shadow Oak Bo. The tough stylish white and tan male is a legend in his own time, having won earlier the Continental and on the  prairies, among …….placements. He’s a dog with a nose and an unfailing desire to find birds, and he will go far to the front to do it. The dog loyal setter fans have been longing for.

Buddy Smith started him, Butch Houston and Dr. John Normandy bought him, and Robin Gates took him to the major all -age circuit aided by his son Hunter. They groomed him for the National and he did not disappoint. He had worthy opposition, notably in Miller’s Dialing In, just coming three, and several others as the video fairly presents.

Already Bo is proving to be a good sire, producing offspring in his image and with his favorable performance traits. There is nothing to lift the spirits of an old bird dog fan like a good setter pup. Such has kept setters in the mix despite a 43 year drought at The National.

The fraternity owes a huge debt of gratitude to Brad Harter for his tireless work to record visually the history of the National and through it the history of our obscure but cherished sport, the guardian of performance based breeding of pointers and setters.

For the setter lover(s) on your Christmas list…visit Pleasant Hill Productions and order your copy of the 2013 National Championship DVD before they run out!!! What better way to spend Christmas Day than to watch Shadow Oak Bo capture the title of National Champion!