A Brief History of The Florida All-Age Championship 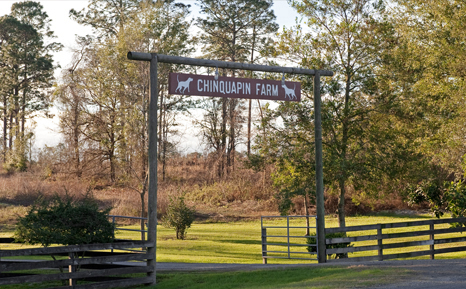 The Florida Championship’s birth was a lucky break for our game. It began with a bird hunter who gave not a damn for field trails, but who loved, and sacrificed for, his country.

Tom Baker came home from a bloody war in the Pacific a decorated Marine officer. He brought ambition to build a business and a love of quail hunting. He founded Shands & Baker, and with his sons Ted and John, built it into Florida Rock Industries. For quail hunting he found land an hour’s drive west of Jacksonville. The rolling piney woods wiregrass pasture land held strong populations of quail. With no surface water, being sand over lime rock, it attracted no deer. He first leased and then bought acreage when opportunity arose.

Sons Ted and John shared Tom’s love of quail hunting. Ted developed a fondness for big going dogs, encouraged by local pro Red Waddell.  In the late 1960s Waddell encouraged Ted to host a field trail. Ted had no idea of trial organization. He marshaled by saying, “We hunt fence to fence… let’s go down this way and then we’ll cut back over there,” pointing toward a distant horizon. Fred Arant Jr., there with his marvelous Rebel string, bitterly complained about the absence of set courses. Ted was offended, and told the secretary to refund Fred’s entry fees and order him off. Fred was astounded, quickly apologized (he’d recognized the ground’s potential) and offered to stay after the trail and lay out courses. He did, and they are still used today. They follow the hog-back ridges above swales and prairie-like flats and offer incomparable views of a wide sweeping dog.

Ted brought into the club fellow patrons of Bill Rayl, including Tom Kennard and T. Jack Robinson, who became Ted’s closest bird-dogging confederates. The three together contributed mightily to the all-age game five decades. Chester Stokes, John Murfree, and T. Jack’s fellow Tennesseans, Howard Brooks and Skip Griffin, and later John Milton, all became directors. Ted invited the author to report in 1995 and I have not missed a year since.

Ted decided he wanted the all-age recognized as a Championship. He invited the National’s officials to come judge (Joe Hurdle, Nathan Cottrell, Joe Walker ). Bill Brown came to pass judgment, and for 1979, the American Field declared the trail an Open All-Age Championship. The rest is history.

Each year the trail has improved, thanks to Ted Baker’s devotion to excellence in preparing the grounds and inviting sound judges. As Andy Daugherty says, “Mr. Ted wants everyone to have a fair chance and does not care who wins.” In truth, Ted is always pulling for underdog handlers who have patronized the trail without winning. Ted has always supplemented the purse, kept entry fees reasonable, and provided handlers grounds to work on when not in competition. To those coming from clay country this is invaluable to acclimate their strings to sandy country. For several years the Championship has awarded $20,000 to the winner, $10,000 to the runner-up and $5,000 to the top qualifier. Today campaigners from across the country make the early January pilgrimage to Chinquapin for a shot at the title and purse.

The Florida Championship is unique. First, all dogs have an opportunity to show on plentiful wild quail over scenic courses.  Second, the lay of the land affords judges and gallery views of all the action. For those who cannot ride horseback, the dog truck, built like a stagecoach, offers comparable (sometimes better) views, and all are welcome to ride up top.  Third, the Chinquapin crew, currently led by Slade Sikes and including dog trainer Mark Hanes, Bobby Taylor, designated driver Darrell (Cowboy) Summers, Don Lemmons and other Chinquapin staff work hard to ensure all a good time and help when needed. T. Hicks and Brenda Sikes prepare and serve free lunches. On at least one night, Ted hosts an oyster roast-fresh pork dinner, with the pork cooked by Ted and Howard Brooks, master chefs. Joe Hicks, recently retired as Chinquapin’s manager after a superb career, serves still as resident consultant and his good company is treasured by all.

In short, the Florida Championship is a true celebration of the field trial sport at its best. Good times and fair competition are its hallmarks, and for many, including the author, its week is the year’s highlight. 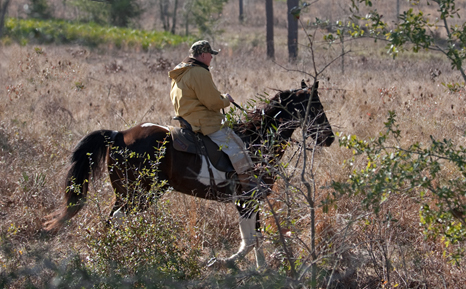 Ted Baker riding to watch his Chinquapin Reward in the 2nd series of the 2013 running. 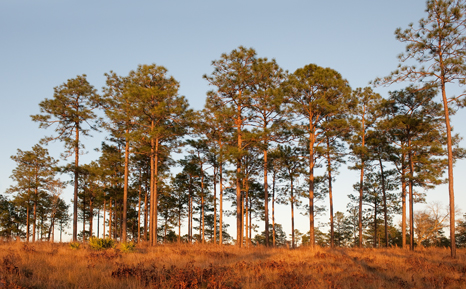 This article appears in the 2013 Christmas Edition of the American Field.

To see the winners from 1979 through 2013 and other details of each year’s running, please visit the Florida Open All-Age Championship Timeline