A Month With Bill Gibbons

Horace Lytle, How to Train Your Bird Dog

“The more we are with our dogs the better we understand them and vice versa.”
D. Hoyle Eaton, The White Knight Story 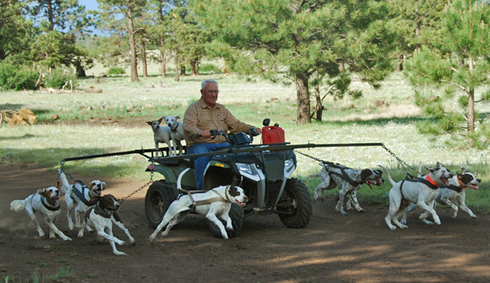 Back in September 2008, Kim Sampson wrote a great piece for this online magazine called ‘Passing the Torch’. She concluded her first paragraph with the following words: “In the years since, I’ve come to realize Bill Gibbons and others like him embody something vital, something that is absolutely essential if we are to ensure the success and longevity of our sport — experienced, effective mentors.”

I am a relative newcomer to pointing dogs and to field-trialing and feel not only blessed to have found great dogs to teach me (and a wife to support me through my habit), but also some of these ‘experienced, effective mentors’ that Kim mentioned. And as it happens, one of those same mentors is Bill Gibbons.

In terms of both humans and dogs, it turned out I had one degree of separation from Bill — and phone conversations led to meeting up for a day out in Arizona which in turn led to my coming out for a month with my dogs. And while there are numerous great trainers who don’t campaign field trial dogs, for someone like me who would love to spend more time running dogs from horseback, the fact that this particular man also won 16 National championships with four different breeds in both the AKC and the American Field over the course of his 37-year career training pointing dogs isn’t merely incidental. While I don’t doubt I made some contribution to dog-camp during my month, the longer I was there the clearer it became to me what degree of generosity, if not sacrifice, had been extended toward me.

This piece is not intended to be specifically about Bill’s method of training, learned from working directly with the legendary Bill West for well over a decade. In his honor, that method is now frequently referred to as ‘The West Method’, as practiced by the likes of Bill Gibbons, Dave Walker, and Maurice Lindley. Nevertheless, in hindsight, watching Bill’s patience as he tried to educate clients as to how to maintain the training he had imparted to their dogs, it became clear that no matter how much I contributed, my month-long stay was still a speed-bump in his normally slick, smooth operation. After all, no matter how willing the subject, transitioning someone into the rhythm and method of dog-camp takes additional effort. In effect, being a mentor has costs — and it takes faith on the part of a mentor to anticipate the benefits, benefits which might only come to fruition some time in the future. Critically, though, and as Kim pointed out in her article, what is at stake in relationships like these is the vitality of the pointing dog world and, perhaps, field trialing in particular.

Being at camp, it was quickly obvious that while actual dog training took up only a portion of the day, everything at camp was dedicated to making that training time not merely possible, but as effective as it could be. While the days consistently started at sunrise with coffee around the stove, we would all head off shortly thereafter to do some kind of chore before breakfast. With my limited expertise, I would muck out, water, and check on all the dogs — hopefully giving Bill or one of his two other helpers more time to take care of horses or birds. We used pigeons for initially breaking dogs, plus johnny-house quail and chukar for intermediate level dogs, as well as quail set up in a half-dozen recall pens. Bill has this latter group of birds set up on what amounts to a full hour-long horseback course for dogs being trained and conditioned for trialing. While not a wild bird population, for those of us used to planted birds for training and trials, these flight-conditioned birds represent a qualitatively huge improvement for training dogs. 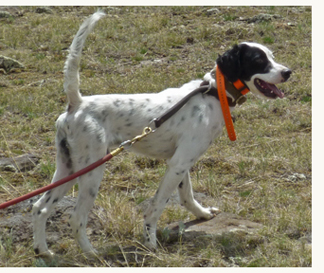 While all of Bill’s training techniques are of interest to me, there are two things, in particular, that I wanted to share: the importance of touch and the importance of steady, patient foundation work. I mean ‘touch’ literally — in terms of how, when, and to what degree we make contact with our dogs while training – whether with our hands, a checkcord, or an e-collar. Our touch is what encourages or diminishes a dog’s style and enthusiasm. One of the first things I saw Bill do that struck me in its simplicity and grace was that each time he approached a dog that was standing appropriately, however inexperienced or broke, he lightly petted its head and back, styled its tail, and then sent it on with confident pat on the side. This emphasis on a light, but deliberate touch also extends to the use of the e-collar. In The West Method, the foundational skill that every dog needs to learn is to stop and stand still and each dog initially learns the cue to stop from a gentle tug on a pinch-collar. As each dog graduates from this phase, they are also being acclimated to the ‘external’ cues that should stop them (for example, a dog on point or a bird in the air in front of them) and to the e-collar. While the e-collar is still used conventionally for correction, in Bill’s method it is applied so subtly that it takes on a hybrid role — as both cue or correction. Once a dog has been conditioned to the collar, the external cues for it to stop, and was ready to turn loose, any failure to stop at an appropriate moment would generate a cue from the collar.

The phrase I keep thinking about is ‘leverage’ — and I’m thinking about it in terms of walking horse bits. In much the same way that we aspire to use soft hands when applying leverage to a horse’s mouth through reins, shanks, and mouthpiece, so should we apply this same idea of leverage to dog training. On numerous occasions over the course of my month I watched Bill check in with clients, his long-standing summer camp helpers, even friends he’d known for over 25 years, to be sure they were using their e-collars in the right way at the right time and with the right ‘touch.’ Watching Bill tune each dog to the collar, and then the collar and each dog to each scenario, was a lesson in an odd kind of Morse code. It’s one thing to read about The West Method in books like Dave Walker’s Bird Dog Training Manual, it’s a completely different matter trying to decipher a tap from a nick, from ‘rolling the dog to a stop’ (as Maurice Lindley has described using an ongoing series of taps for a less-experienced dog), to continuous stimulation. There are whole paragraphs that could also be written on how Bill uses a checkcord and pinch-collar — and, indeed, on why Bill prefers to use machine-shop air-hose for checkcords rather than actual rope. While the pinch-collars he has made for him are clearly close relatives to those used by Dave Walker and others, his are shorter, and a little wider and stiffer because, unlike some who cue the dog with what is largely an acoustic cue caused by flipping the roller buckle with the checkcord, Bill believes that he can give the dog a more consistent signal by creating a clear, definite instant of pressure on the dog’s neck. Everything comes back to touch and leverage — and for Bill, a 3/8” rubber hose has a better hand to it, and a shorter, stiffer collar gives a more distinct cue, and as a result he can communicate better with each and every dog. Nevertheless, as much as I am a fan of The West Method and Bill’s technique, my point is remarkably simple. Being able to walk out and work dogs with a long-standing professional, a true master practitioner, you have the opportunity to observe all the elements of ‘touch’: when to intercede with the dog, in what way and to what degree, and most importantly to see how the dog receives that touch.

Most of us can recognize the signs of a dog under stress — the dropped tail, the ears back on the head — but watching Bill translate a dog’s stress from varying shades of resistance to subservience and then decide either to keep on, back off, calm down or fire up the dog further was mind-boggling. But in order to learn you have to listen. Bill abruptly interrupted me for interrupting him at one point early on in my month there. (I thought he might not have seen a dog on point ahead and thought I was being helpful.) But what the sudden point of friction taught me was that if I was talking, if I was watching someone else’s dog, I wasn’t listening…either to Bill or the dog he was working on a checkcord three feet in front of me.

The other thing that became obvious to me was that nothing needs to be rushed. At Bill’s, once a dog has graduated to pigeons, the end-goal is a broke dog; every dog is trained with that goal in mind. Nevertheless, as Horace Lytle wrote back in 1934 “when the thrill of your first win surges through your very soul” the tendency can often be to try and maintain that rush of adrenaline and pride and, in doing so, rush a dog. And rushing a dog from puppy to promising derby to broke dog is often what seems to cause a promising derby dog to disappear from future view. Being at dog-camp this summer, it was clear that no matter how young or old the dog, every step was measured, and that nothing was frantic — especially, perhaps, when a dog made a mistake. And before every dog is really given an opportunity to make a significant mistake, it learns how to stop and stand still with a cue from either the pinch-collar or the e-collar. Every mistake, then, is simply another opportunity to frame what is and will be correct behavior in a given scenario — stop and stand still. Again, for all the traits and trials that come with each particular dog, an elegant simplicity emerged in the tempo of dog-camp, a practiced routine established through time, constantly re-appraised and re-evaluated as each new student passed through.

After a month in Arizona, I realize that I’ve been incredibly lucky with the dogs I have — lucky in the sense that they have not only opened my eyes to what a great dog might be, but that they have done well despite my amateur efforts to train them. Their respective achievements are the greatest argument for buying a dog with good, proven genes from a reputable breeder. I went out to Arizona with my dogs not only for their benefit, but as an investment in the dogs I’ll own in the future.  And there will be more trial dogs in my future because of the kindness and generosity of mentors like Bill Gibbons and, for that matter, Kim Sampson. 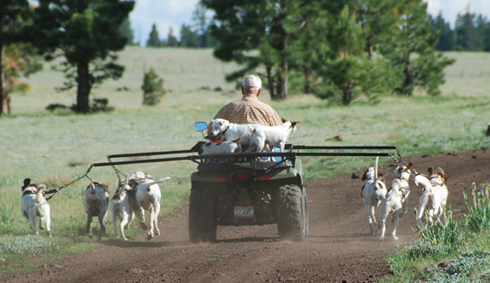