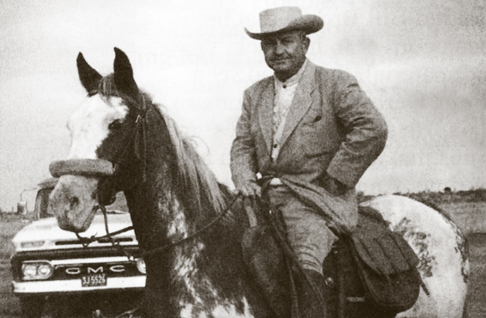 Our best Christmas ever was painted by a runaway white and black “Commander” setter that Carl Jr. Duffield gave me. His name was “Nip”.

Carl and I had a long, hilarious friendship that began when he brought George Evans to Frobisher one August. He made fun of my boots and I made fun of his hat. And, occasionally of his shags.

I was especially fond of Nip, who ran off every time Carl ran him. Nothing that Lonnie Tuck or Carl’s pro polisher John Francis Brown could think of would corral Nip. Only occasionally would he point, and never would it be the release quail at the Texas Championship. Nip preferred wild quail exclusively, and he went everywhichaway to look for them.

Carl was through with the big ol’ mass of flags when I began to cater to him. I started with raw weenies, and after a while, I slipped him a chicken liver or gizzard. He definitely got to know who “Bill” was and would cock his ears forward when he heard my name, and then, my voice.

“Im pretty sure it was at Palestine in those red clay arroyos where the main attraction was Tiny Wahoo and Dr. P.T. Kilman with Texas’ Ernest Allen and Roy Maroney dragging Tiny around the course for him that Carl got really mad while both of us were under the influence.

“You so dam SMART,” he growled, “YOU run him an hour. If you finish him under judgment, you can HAVE him!!! I’ll sign him over to you.”

Well I did. And he did. Not without a lot of help. Lonnie never was better. John Francis used his pickup deftly, as never before…and I have never mentioned Roy and Ernest as complicit…until now.  You can guess at the motives, and there is no imagination to encompass that wild hour of delight. No game contact that we KNEW of, but I picked Nip up under judgment.

Now what was I going to do with a bolting setter in the wilds of the Chattahoochee National Forest, where I lived and hunted grouse; where my best “home dogs” were a three-legged Brittany spaniel and a miniature Poodle?

Clem was the Brittany and he was arsenic on grouse. Jacque was the perfect dead bird finder and retriever. Except for a gunshy pointer bitch I hunted over on the Gillis lands in the Ocmulgee valley, Jacque was the nonpareil retriever I ever saw. Sadly, we never had a Lab.

Anyway the Christmas story began when Nip and Jacque adopted one another. I was plumb silly about taking wild bird dogs in the house, and that is where this slashing setter and the black poodle made up hide and seek games and wallowed together. I took Nip quail hunting one time when Lake Chatuge almost dried up and went away one November. He was gone a long time, and Clem found him and backed him on a nine bird covey. If he had not found those birds, we may not have ever seen him again. He was as handsome as his Grandsire, Commander’s Hightone Beau, Tail rigid and flag follicles waving everywhere. It was the best I had ever seen Nip. Jacque, a natural backer, (and smarter than any of us) looked on almost diffidently, but went to work, beating Clem and Nip to the two birds we shot.

It was the beginning of Christmas week that year when a large pack of dogs following a female July hound in season came close enough to our mountaintop to attract Nip’s attention. He was in his pen that morning, but he was not at the supper dish. The next morning, Jacque was gone, obviously in search of him. Clem and Sam the Beagle were immediately chaperoned and hawkeyed constantly. Neither had ever been leashed except for post-puppy training, “whoa-sit-heel-stay”.

Our mountaintop was near the north Towns County line. It was about 300 yards steeply down to U.S. 76 that led out of the county north, and back south through Hiawassee to the head of the lake where Nip had found his quail—about four miles away with either a long two-lane bridge to cross in traffic, or another three miles of still-to-market macadam through sparse settlement.

For three days, the pack of dogs were seen all over this part of the county. The pack contained huge “warbeard” and “German Poh-leece” males and others numbering about 18. We saw the pack twice, two days apart and at sites two miles apart.

U.S. 76 was heavily traveled by 18-wheelers, bound for Knoxville, Asheville, Chattanooga and the Greenville mill country.  Less than a minute elapsed, day or night between rigs.

After a week of No Jacque (He was the most important non-human in the Galaxy to Betts, her Mom Lucy, Mike, Keith, Vic and me) gloom descended.  And Nip, whose reputation and past proclivities did not bode well for a return under the best of circumstances, was also heavy on my mind.

A scattering of snow—just enough to cover some of the leaves — was exciting to others, but not to our home. We had not heard of a sighting in a day and a half.  We scoured the countryside without unearthing a hint or clue.

Christmas eve night, not sipping, but gulping egg nog (with lots of “nog”) I was mournful and tearful in my chair backed against the door no one Ever used except in summertime. The television was wall-to-wall carols. Perry Como, Bing, Rosemary Clooney….

The door was moving against the latch-hole…skeeeereatch !

I remember now how I had chills all over me, and how I was shaking all over when I opened that rarely used portal. It was stuck at the top. I SNATCHED at the knob, twisted and…and…

There, his head encased in cockleburrs, his chin on the doorsill, paw improbably reaching to scratch again…was Jacque!

I blubbered and shouted and Betts said I screamed “like a pig impaled”. I rolled around with my black burden on the front porch, laughing and crying and four other people trying to take him away from me…and I bumped into Nip, poor, bedraggled, soiled Nip, who was also there, returned.

Neither of the animals could walk normally. How they made it from the foot of our mountain up to the porch I could not divine. Jacque’s hind legs were caught and trapped against his chest and forelegs by burrs and briars. He just relaxed and lapsed into immobility until we freed him, with many scissor cuts and electric clipper prods and strokes. Then when we could see our Jacque as a mere wraith of his past presence, it was Nip’s turn.  It was easier to liberate him. He was not so strapped and unable to ambulate. He lost a lot of flair and flag.

We fed them and they went to sleep pretty soon.

We sang, toasted, then gave solemn thanks for what we then declare that up until then, was the Christmas of all Christmases. Maybe in a lifetime one has one such celebration of deliverance, answered prayer, unaccountable fortune and undeserved, surprising Joy.

Two things I have thought about now for nearly 50 years.

Who was the “leader” that found the way “Home”?

Nip was larger, stronger, and had proven stamina.

But Jacques gave a primary clue to the answer when he limped and dragged his frail, hungry, exhausted body to make noise at the only door where he could have possibly been heard on Christmas Eve. 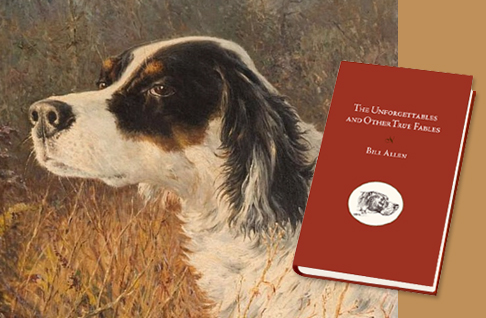 We’re planning on publishing the third printing of “The Unforgettables” in 2021!