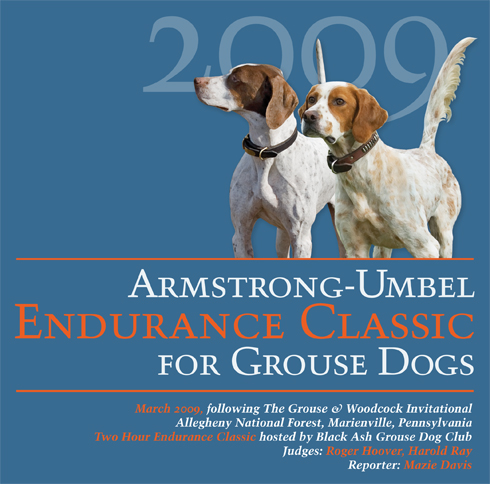 The Black Ash Grouse Dog Club is proud to announce the first running of the Armstrong-Umbel Endurance Classic in March 2009. Heats will be of two-hour duration. The Armstrong-Umbel Classic has been run for over 30 years as an hour classic on ruffed grouse.

Members of the Black Ash Club believe there is an importance to re-establish an endurance stake for grouse dogs. From its inaugural running in 1943 to 1957, the Grand National Grouse Championship ran as one hour qualifying heats and two hour finals thus making it a true measure of stamina for a dog winning the coveted crown.

As we know, many aspects of field trial performance are open to subjective interpretation. Reading through the Grand National and other important grouse championship reports reveal shifts in emphasis over time and from one reporter to another, particularly where a significant change occurred. i.e. the change in length of heats in the Grand National fifty years ago.

Endurance is the ability or strength to continue and maintain a high quality of work despite fatigue, stress, or other adverse conditions; stamina.

Stamina: physical or moral strength to resist or withstand fatigue or hardship; endurance.

Club members and other supporters of the Armstrong-Umbel feel strongly that endurance is a quality we should seek in all field trial bird dogs. By definition, an endurance event evaluates many of the subjective preferences we seek in our dogs today. Does the gait we think attractive also prove to be efficient and sustainable? Do the dogs we find exciting have the mental fortitude to respond well to additional stress? Both these qualities are necessary to keep dogs focused on the task of hunting for and handling birds with class past the hour mark.

For anyone wishing more information or to support the Armstrong-Umbel Endurance Classic, please view the information on the right side bar on this page.

Additional details to follow in the American Field ad.