Spectacular bird work under nearly impossible conditions propelled Hard Driving Bev to first place in the inaugural running of the Venango Classic, an all-age stake run on grouse and woodcock. Bev had two stellar finds on running grouse during a thundering deluge of heavy rain that was bad enough to make owner-handler Joe McCarl come within a hair’s breath of throwing in the towel. Hard Driving Bev set a standard of uncompromising excellence that will exemplify the ideals sought in this stake for years to come.

There was a strong element of the miraculous in Hard Driving Bev’s winning performance in the Classic — the fact that she even finished the course under the severe weather conditions during her brace, or that Joe McCarl, her owner-handler, didn’t throw in the towel when she was out of touch for 9 minutes at the back turn of Loleta no 1 where a deep valley and choppy hills have sent many dogs out of judgement under benign conditions. It was equally miraculous that Bev stayed with McCarl during a pounding rainstorm that made it impossible to hear her handler, or for a handler to hear a bell even a few yards away. The rain was hitting the ground so hard and heavy that each drop splashed mud horse-head high, and winds of 20-45 mph at times literally swallowed a handlers voice. Given those conditions, perhaps the greatest miracle of all is that Bev finished her hour with two brilliant finds on difficult running grouse, a daunting challenge under the best of conditions. In the end, both judges acknowledged that Bev’s great bird work was what completely separated her from the rest of the field.

Bev and her bracemate, Awsum Speed Queen, owned and handled by Dick Straub, broke away in driving rain in the first brace of the second day of the classic. The classy pointers ripped up the course, punching to and beyond the limits despite the conditions. About 10 minutes into the hour the rain increased to almost impossible levels. Bev was scouted beyond the first big field that is lined with pines but returned to the front on her own. Straub threw in the towel at 24 and Bev had disappeared to the front. She had not been seen by the time the party reached the mid-point of the course where it turns left to cross a series of choppy hills. McCarl sent a scout into the valley to look for her on point but the search was futile and nine minutes had expired.

“If I had had the tracker on her I would have called for it,” McCarl said. “I was ready to give up.” At that moment Bev showed up all on her own coming down the hill from the left. She was exactly where she was suppose to be. Both judges praised Bev’s intelligence and biddability under those conditions.

McCarl swung Bev back up the hill where the course follows an old tramroad through several dense stands of young beech. Four minutes after Bev returned Judge Crum saw her slam into a solid point. When McCarl was about 70 yards from her, a grouse blew out about 30 yards ahead of the dog. It was a solid piece of bird work but the best was yet to come.

Bev tore up the course for the next 15 minutes and then took the lower edge of the big cut near the end to its furthest reaches. A grouse blew out wild as the field trial party entered the cut and soon after, at 54, Bev was found standing about 300 yards ahead. McCarl couldn’t produce a bird and released Bev to try to relocate the running bird. Bev established point about 50 yards to the fore, then corrected and cautiously worked the wind for another 70 yards before locking up again. She had two grouse pinned perfectly against the far edge of the cut and McCarl put them to flight.

“It was one of the best pieces of relocation I have ever seen,” Judge Crum said. Judge Mentz concurred, adding that he was particularly impressed by the intelligence and skill Bev displayed in getting those two birds pinned. Bev finished running big and powerfully to the front. 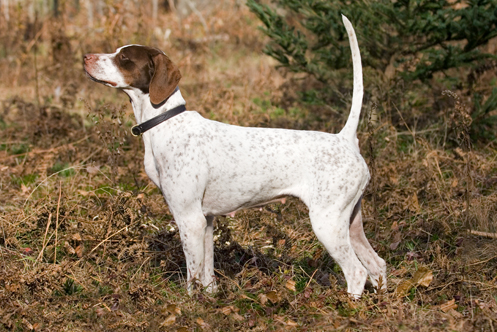 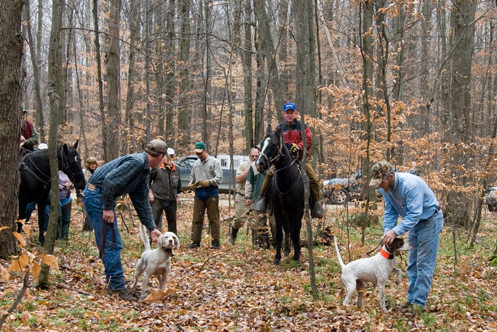 Hard Driving Bev at the breakaway of her second win of the Grand National Grouse Championship in 2006.