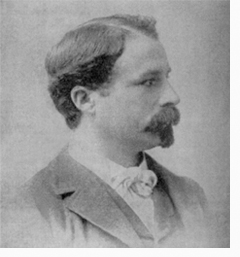 In some of the world’s greatest galleries and private collections hang paintings of upland game, wild fowl, big-game and gun-dogs with but three words that accredit them to immortality in the world of brush and canvas: “It’s an Osthaus.” And by such token Art has erected its own monument to one who shared God’s gifts unselfishly and gave clean greatness to Posterity’s equity in the Great Out-of-Doors.

Edmund Osthaus, destined to become a charter member of the National Field Trial Champion Association, was born in Hildesheim, Germany, his father a gentleman farmer of high caste, his mother an English gentlewoman of great beauty and charm. Manifesting an early natural fondness for outdoor life and childish admiration for the beauties of nature, his boyhood was replete with every opportunity for such expressions as sketching sheep in the pastures and deer and other game wandering through neighboring forests. Dreams by Edmund’s father that he should explore  the profession of architecture, yielded reluctantly to his lad’s penchant for art but resulted in a six month trial course at the Art Academy in Dusseldorf. So rapid was his progress that during ensuing years while his parents removed to the United States and became citizens, young Osthaus completed studies in the Atalier of Herr Christian Kroner, the most renowned painter of wild animals and forest scenery of his era. Thereafter Osthaus rejoined his parents in the United States and from 1885 until 1893 was chief instructor in the Toledo, Ohio, Academy of Fine Arts. By then, however, his standing as an artist had become one of National recognition. Fame and financial success beat a path to his studio’s door. (In 1892, he married Charlotte Becker with whom he had several children.) 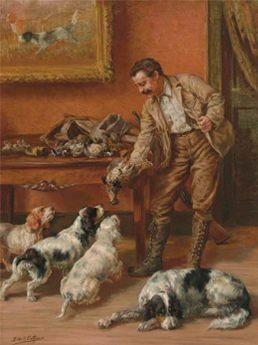 A Huntsman Returning Home with Game

Thus enabled and magnificently physiqued, Edmund Osthaus roamed the North American continent as gunner and angler. To him such questings provided thrills of constant delight enhanced by the lights and colors with which nature touched and regilded the facets of his profession. Year in and year out Edmund Osthaus angled lakes, streams and the salt water while gunning in their multifold haunts prairie chickens and ruffed grouse, snipe and woodcock, and, with greatest ardor, his favorite the bobwhite quail ahead of sterling bird dogs. 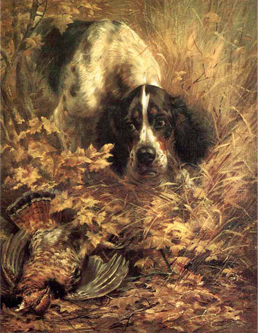 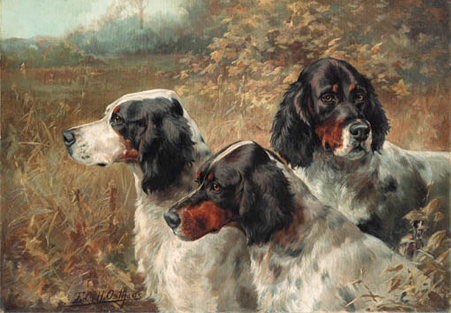 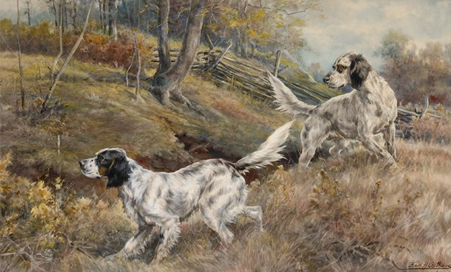 His kennel sheltered well-bred setters and pointers broken by himself to special excellence in field performance. Generous to a fault, he shared all luxuries afield with intimates who enriched his outings. Probably the most famous of his dogs was Ripsey, a descendant of the great pointer Rip Rap. She was a performer with winning ways along the eastern field trial circuit, and , handled by Osthaus himself, she accounted not only for many wins but doubled in duty as a magnificent gun dog. 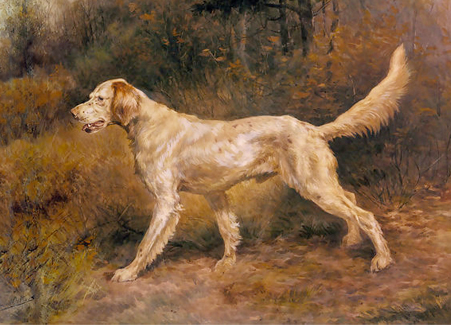 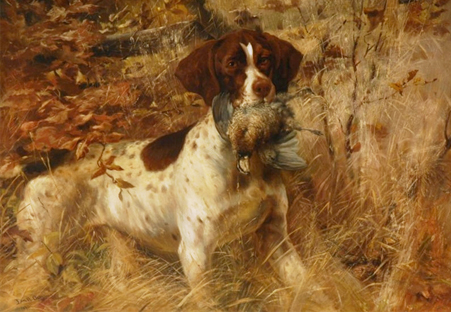 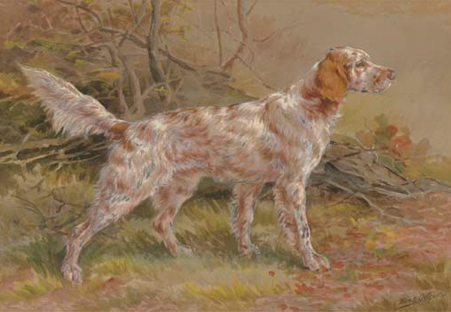 Whether as a field trial judge, club-member or officer, councillor or guide, Edmund Osthaus’s efforts were invariably characterized by sound efficiency and common sense. Having a profound knowledge of practical gunning, field trial demands combining high ideals and moral courage to fearlessly declare his judgements, he was much sought after by field trial clubs to don the judicial ermine. This he often did and with invariable graciousness to one and all. His was, indeed, a fine enthusiasm and passionate love for the field trial dog reaching far beyond momentary considerations. 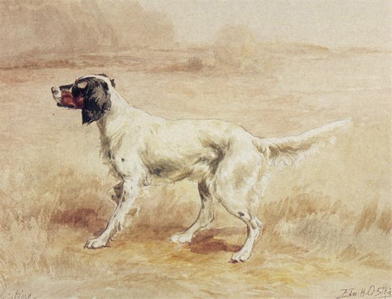 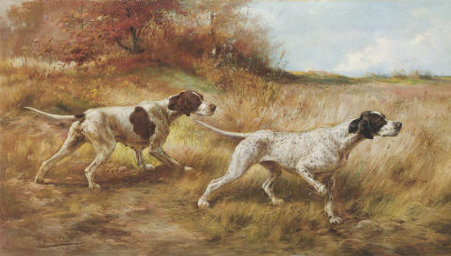 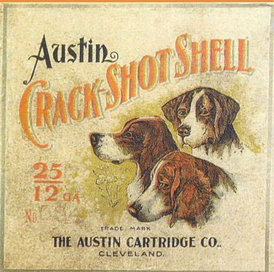 Edmund Osthaus, born in August 5, 1858 died at his quail-hunting lodge in Marianna, Florida on January 30, 1928. His works appeared in The American Legion, Colliers, Cosmopolitan, Field and Stream, McCall’s, Redbook, and The Saturday Evening Post. His original paintings are highly sought after and some have fetched auction prices into the six figures. The Ames Plantation manor house in Grand Junction, Tennessee, is home to a large collection of Osthaus paintings and is open to the public by appointment. For more of Edmund Osthaus’ work, visit Galleries. 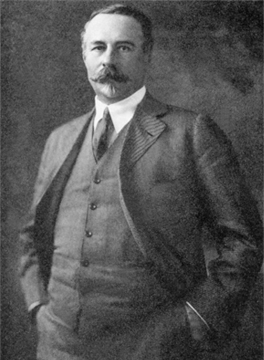