Excerpt from: The Unforgettables and Other True Fables

On the morning of March 9, in a cotton field just outside Hernando Mississippi, on the (Leslie) Anderson Place, Eddie Mack Farrior shook me awake and said:

“Hail Farr, Ed Mack,” I mumbled, “a feller’s hafta be crazy AND drunk to take a dog out this morning. I already looked out!!!”

“It’ll be a real test!” I admit to having had favorite dogs when I began in trials. I had a derby the same year Warhoop Jake was a derby, and I saw him. He was nonpareil. He was as good as ever lived. I saw him win and I saw him robbed. I saw Jake win one-course trials on liberated birds and I saw him win on the wildest birds in the rottenest conditions. He was also a “Fountainhead.”

I asked Eddie Mack to find me a Warhoop Jake dog. He said he had a white and black bitch, less than two. He brought her to Hernando. The ground was like permafrost, with a layer of sleet under five inches of snow. The big cotton stalks, Mississippi sized cotton stalks—had a good inch of ice around stalk and branches. It was a bright morning and the field looked like miniature jeweled trees in perfect rows.

Sue was straining at the leash. We couldn’t get mounts, so we were afoot.

“You got more guts than money,” I laughed, “but, then, one never knows…”  Eddie Mack Farrior was notoriously F R U G A L!

Well, he unsnapped the leash and she filled the air with glittering crystals, running crossways of the huge cotton field’s rows, reminiscent of Texan Boy when he won the Free-For-All at Shuqualak.

On the other side of the cotton field, she whirled suddenly. I realized just then she had been racing down about a 10 mile per hour gusty breeze.

Now, this heartbreaking harlequin demon slid at point through a cotton stalk, and a close-knit covey burst up as she stayed, just a moment, and then powered off after the one she picked out…. 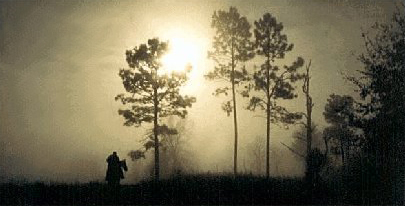 Presales of Bill Allen’s “The Unforgettables and Other True Fables” will be available through Strideaway in the coming weeks. Stay tuned!!