Farewell To A Champion

He was whelped May 12, 2001. He was to become “one to be reckoned with.” Bred by Nathan Phillips and solely owned and campaigned by Mr. Bert Wimmer, White Powder Pete made a name for himself on the Open All-Age circuit. If Pete was entered in a trial, the winner was in doubt if he had not competed. With multiple National Champions in his pedigree no less was expected of him. He was handled by Colvin Davis and scouted by Mazie Davis during his career on the circuit. The Davises and Pete had a bond; one that included trust and admiration. 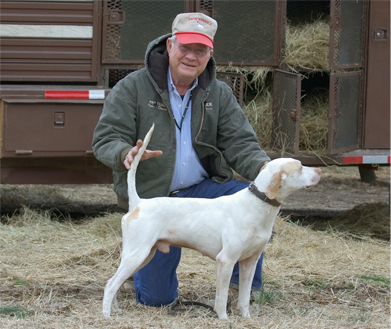 Colvin Davis and White Powder Pete at the 2006 National Championship

Pete’s win record includes multiple championships. He won on the northern prairies and he won on the southern venues. He was an endurance champion. The test of a true All-Age endurance competitor is not whether he can go three hours but how many times he can do it. Pete left no doubt that he could do it and do it with style. He seemed to be at his best in the extended braces. 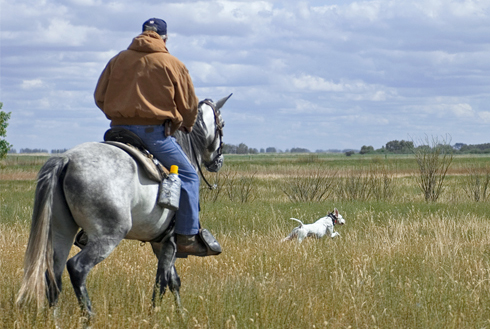 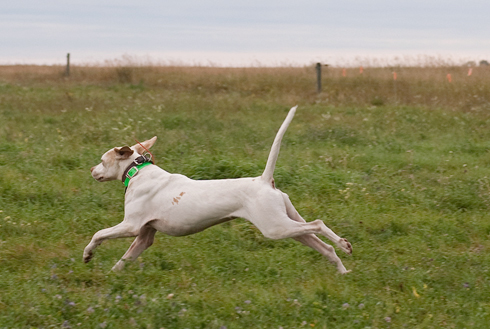 His best efforts were probably in 2006. He won the Southern Championship; a grueling test for any dog and Pete had been named Runner-Up the previous year. He was named the National Free-For-All Champion in 2006. The championship series in these two titular events is contested for three hours after a qualifying series. It was no small feat to capture both these crowns a little over two months apart. Pete also won the Missouri Championship in 2006 and was named Runner-Up in the Manitoba Championship that fall in Broomhill, Manitoba. Pete did not win the National Championship, but he had performances on two occasions that had they been in different years he may have earned the elusive title of National Champion. Pete was not lucky in the draw in the 6 times he competed in the National.

The first time I saw Pete was in the Broomhill trials when he was in his first All-Age year. The crops were late and the trial courses utilized some of the huge pastures. Colvin said he knew Pete would not show well in the pastures but if he could get him on a line things would be different. Colvin said sometimes a dog had to have something to lean on to build a heart. Well Pete got to a line and he leaned on it as he carried it out of sight. There would be many more lines and much more heart in the years ahead. 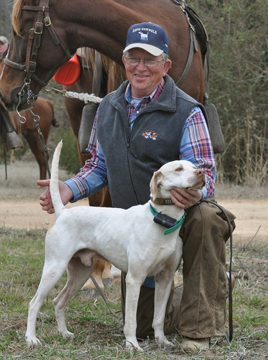 William Smith and White Powder Pete at the 2011 National Championship

On Thursday, February 17, 2011 Pete made his farewell tour on the Ames Plantation during the running of the 112th National. He was turned loose in the East pasture to begin the afternoon running. The temperature was rare for a February day in Tennessee; the mercury stood at 63 degrees. Colvin was handling as usual but Mazie could not be there because of business commitments at their home in Minter, Alabama. Pete went down the south line in the East pasture and was seen going into the Jim Miller corn field. We did not see Pete through the Miller field; Colvin rode to the south and I was dispatched to the north. In the Buster Graves field, Colvin stayed to the front and I was sent to the south. Colvin called point for Pete at 15 at the east end of Buster Graves. Pete was standing in a feed strip with his brace mate backing. Colvin flew the covey and Pete, as he always did, had style to burn. The find was reminiscent of days gone by when Pete, younger and faster, would be out of pocket and then would be found standing straight to the front. We crossed Ames Road and made the horseshoe around Cedar Hill. At 43 Pete was standing just before going into the Chute. He had the birds penned perfectly and again he stood majestically as they took to wing. Pete went out the north end of the Chute far ahead of Colvin. The course goes straight ahead at the Agronomy fields, but Pete wasn’t in sight and Colvin turned toward Wolf Crossing and found Pete standing at 53 in heavy briars. Pete’s tail was still at 12 o’clock and there was no exception taken to his style or manners. At the Strawberry Patch, Colvin sent me to the south as Pete was seen headed that way. As I reached the Sam’s Water Truck fields, I spied Pete. He was going about his business as usual. He was on the field’s edge and he was hunting as he had done hundreds of times before. I watched him as he methodically went along. It seemed a shame to interrupt him and send him back to Colvin. This was to be Pete’s last trial. Mr. Wimmer had asked Colvin to run Pete one more time in the National and then to retire him. As I watched Pete hanging on the edges, Colvin’s saying returned to me and I recognized the fact that Pete was indeed running from his heart. I thought it would be the thing to do to just let Pete go and enjoy the day as he wanted to, but I also had a responsibility. I gathered Pete up and turned him back to Colvin. Pete stayed to the front for the next 30 minutes and he made some nice casts especially in Turkey Bottom. Pete had injured his shoulder here the previous year and when Colvin noticed that it was bothering him, he decided to pick him up in order to prevent any further damage.

So the career of White Powder Pete came to an end ninety minutes into the brace, but his performance was nothing to be ashamed of. Pete had exhibited class and style his whole life and today was no exception. There are only so many three-hour heats in any dog. Pete may have been the exception to that rule. Although his field trial career has ended his bird hunting has not. He will be used in the hunting string at Davis Quail Hunts at his home in Minter and he will be happy doing what he loves to do.

The field trial community will no longer see Pete, but we will forever appreciate the competitor that he was. Farewell, old friend. 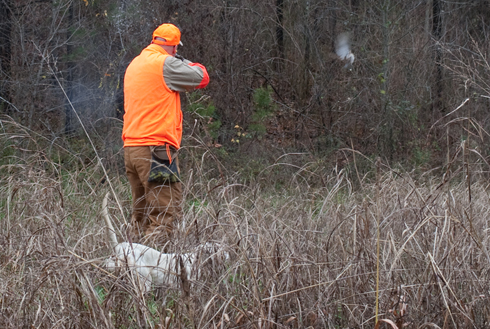