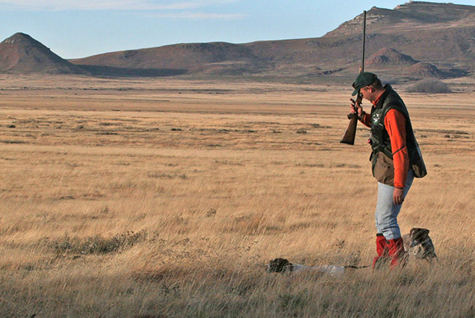 The most important aspect of South African trials is that they are specifically designed to emulate natural hunting conditions as closely as possible. The Standard for Judging requires a dog that best produces birds for the gun in an exciting manner. It concludes with the words “ABOVE ALL he must be in total harmony with his handler for no other purpose than to give him the opportunity to shoot the pointed game in a manner befitting sportsmen – there can only be one measure for a good dog and that is how well he serves the gun.” However, it elsewhere states “A dog should be named for brilliance of performance in spite of trivial error rather than on a basis of errorless mediocrity” Finch Smith’s classic guide to judging, written in 1916 and the basis of all judging since then perpetuates this contradiction by stating “No dog, however brilliant be his ranging and style, can win a field trial that does not find game, and the galloping, courageous dog that finds in slashing, confident style will beat the potterer, even though the latter find as much, or even a shade more, game.”

It is this dynamic contradiction that all judges must bear in mind and on which they must exercise their own judgement.

There are five major Championship trials in South Africa, one each in the Western Cape, Highveld, Natal, and Eastern Cape Highlands (Border) and Nationals which moves from year to year. Each is in very different terrain and climatic conditions, on different species of birds. In order to qualify for Championships, a dog has to place in a maiden trial at one of the four regional trials. In order to qualify for Nationals it has to place in a Championship Trial. Championship dogs accumulate points over the course of the year based upon their placings at each of the Championship trials, in a golf ranking system, and the dog with most points at the end of the year is the Dog of the Year. So in order to win Dog of the Year, the dog has to prove it’s versatility and ability on all indigenous game birds and in all local hunting conditions. 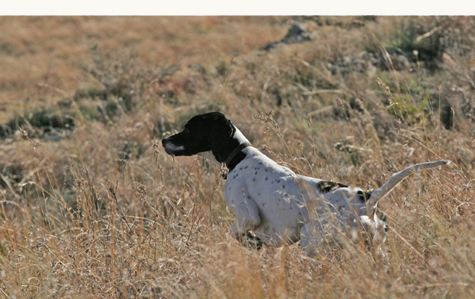 Our trials are run entirely on natural game under normal hunting conditions. As one would do when hunting, we do try to make the best of the prevailing climatic conditions or wind direction as much as possible, and obviously subject to trial logistics.

Designed to afford a championship dog about one to one and a half hours of exposure to the panel of judges over the course of the trial, SA trials are run in a variety of conditions, and in direct match ups against all other dogs competing for a final place.

Prior to the commencement of the trial, the names of the competing dogs are drawn in braces on a completely random basis, but ensuring that no two dogs drawn together belong to the same handler. Dogs are run in the braces and in the order in which they were drawn for exactly the same duration. The time allocated for braces is determined by the judging panel in consultation with the field steward and is normally based on logistical issues, the cover available and the quantity of game anticipated. The brace duration is generally 10-20 minutes on average.

The judging party comprises 3 judges, one of whom is appointed as the Chief Judge. The Field Steward is effectively in charge of all logistical issues and for the navigation through the venue for optimum results. Generally each handler is accompanied by a judge, while the Chief Judge aspires to obtain as much of an overall view as possible.

Once the dogs are cast off, the handlers proceed on foot as if hunting over their dogs. The other contestants and the gallery of spectators proceed on foot behind the two contestants under the control of the field steward. Once the time allocated to each brace has elapsed, they are called up and the next brace is cast off. This is repeated until the entire field has run, which is termed a round. At the end of each round, the performances of all dogs are discussed by the judges and the dogs that have committed eliminating faults such as chasing game, breaking to shot, failing to back, etc. are excluded from all subsequent draws. Dogs that are not eliminated are carried forward into subsequent rounds and are re-drawn with other dogs for a minimum of three rounds, at the end of which the judges are at liberty to match up surviving dogs at their own discretion so as to directly compare dogs in identical conditions.

At the end of the trial, the aim of the judges is to decide, if the exercise could be repeated, which few dogs in order of merit they would choose to hunt over in that terrain, under those circumstances for those days. It’s as simple as that. In order to be eligible for placings, dogs must have found and pointed game, backed other dogs on point, been fired over and proven steady to shot and flush of game. Generally, a first, second and third place is awarded if merited, and up to 4 Certificates of Merit can be awarded. All judging decisions are reached by consensus.

A US triallist might be surprised by a number of differences from their trials:

1.Trials were originally held on horseback, but the rules do not require this, and over the past few decades organizers have found it easier to run all trials as foot trials. This has helped the popularity of the sport. However, it is still theoretically possible to organize a horseback trial.

2. Dogs cannot wear any collars unless on judges orders. The judges will often allow a dog to wear a flat collar, but will not allow electronic or telemetry collars. The consensus judging view is that the dog must work for the handler, and report back periodically. Of course even the best dogs are lost at times – it is common, even at Nationals, for a handler to disappear over the horizon looking for their dog at the end of a round. In that case the dog is typically eliminated from contention for being out of control.  Fortunately we don’t work wooded areas or thick and tall brush, so our venues usually allow a clear view of well over a mile in any direction, and are sufficiently remote eliminating the danger of the dog being hit by a car. To date no dog has ever been lost permanently at a field trial. However, some handlers do make use of electronic collars for training purposes and an increasing number are using or looking at the Astro Garmin.

3.No scouts are used. Again, venues are open with clear views to the horizon, and dogs are expected to remain in contact with the handler, even if this just means every few minutes cresting a rise to make eye contact, check for instructions and then move on.

4.Each handler is required to carry a shotgun which is supplied by the host club. Since retrieving is not judged, the game is not shot, merely saluted with black powder blanks. A dog cannot be awarded a place unless it has been shot over and proved steady.

5.All recognized pointing breeds are allowed at compete at Championship trials, but they are dominated by pointers (although with a recent strong charge by red setters).

6.Dogs are allowed (and this is preferred by judges) to flush birds on command, rather than remaining stationary whilst the handler flushes. So they have to remain steady on point until commanded, at which time they can move forward and flush, again remaining steady to the flush. Snapping or pouncing however is grounds for immediate disqualification.

7.Tail position and stance is not judged. Some dogs will stand with upright tails, others will set. Most stand or crouch intently, with tails raised 45 degrees.

8.Only once both parents have passed a Hip Dysplasia exam can a pup be registered.

Of the top dogs currently running in South Africa, two are US import’s from the same breeding (same parents, different litter) as a recent US All Age National Champion, another is a European import from the same litter as a World Champion, a third is from predominantly Scottish breeding. None of them stand out in terms of range, nose, hunting pattern or biddability, and only one (a US dog) has qualified for our Nationals. The only way to tell them from the average SA dog is tail carriage and the tendency of some SA dogs to drop their noses when working out scent.

South African trials in no way prejudice European teams as their standard is sufficiently broad to allow for the tighter standards of those countries. The South Africans delight in hosting foreign teams, and ensure they have memorable and enjoyable trips.

The 2009 Western Cape Field Trials were held in Cape Agulhas, on the southernmost tip of Africa, between the 13th  and the 16th of May. The Western Cape is better known for it’s beaches, fishing, mountains and wine than for it’s rough shooting. And for good reason — the local bird and mammal species are close to unplayable for inexperienced dogs.

The predominant species of game birds are greywing francolin and cape francolin. Greywing are civil birds, occurring in widely separated small covies that sit tight in the mountain heather but flush if pressurized. Cape francolins are far more common, but are decidedly uncivil, often referred to as a cross between an ostrich and a water rat. They like the thick reeds and bushes in the riverine valleys and gulleys, and if disturbed will scurry downwind, with a few peeling off every so often to find a thick patch (or even water pool under the reeds) to sit in. An inexperienced dog will cautiously wind after the covey, and after a kilometer of drawing will see the last remaining bird in the covey take off 100 yards away and fly back over his head to rejoin it’s fellow. An experienced, positive dog that quickly gets on top of the covey to pressurize birds into sitting tight and which rapidly sweeps 50 yards on each side of the scent trail will produce 20 birds from that same covey, in 10 to 12 separate clean finds and points. Dogs literally have to get on top of the birds to make them sit tight – it is not uncommon to see a capie flushing out from between the dog’s back legs whilst another comes out from under it’s chest. Only the best dogs can handle both species, racing up the mountain side and respecting greywing’s space and then crashing through the riverside brush to get on top of cape francolin.

The Cape is also notorious for it’s mammal distractions – several different species of buck, porcupine, mongoose, otter, lynx, rabbit, hare, to name but a few. As a result, the trial is an annual test of endurance and manners and skill and nose.

And a highly enjoyable one, culminating, by tradition, in Bloody Marys overlooking the beach followed by a formal dinner. 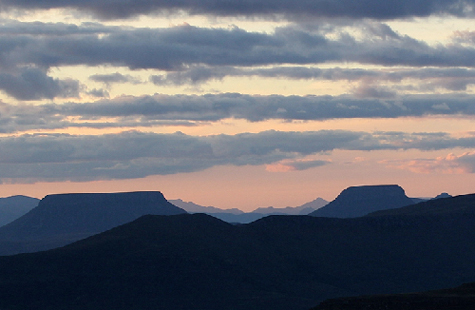