For the Love of the Sport ~ Sherry Ray Ebert 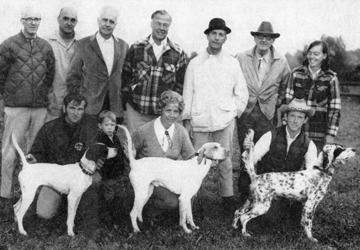 Tomoka Wins the 1971 National Shooting Dog Futurity. Standing furthest to the right behind Harold Ray and Tomoka is Sherry. The little guy next to George Tracy in the front row, left is Doug Ray.

Sherry Ray Ebert has dedicated much of her life to field trials, the development of field trial bird dogs and sharing her vast knowledge and experience with others. Her extraordinary contribution to the sport is unquestionable.

As a young horse trainer, Sherry entered the world of pointing dogs when she married Harold Ray at the age of 17 and they began training bird dogs with the great trainer, Fred Bevan. Within two years they were hired by Elwin Smith thus beginning a relationship that was to endure for thirty-two years and resulted in 25 champions winning over 60 championships. These include dogs that are familiar to most of us including (Hall of Fame Dogs): Champion Tomoka, Champion The Performer, Champion Destinare, Champion Bonafide and National Shooting Dog Champions: Champion Tomoka and Champion Righteous Dan. As well as expertly scouting these dogs to their wins, Sherry was indispensable to their development.

In the early prairie trials she attended, she rode every brace to watch and learn from the best, including John S. Gates, Fred Arant, Herman Smith and Bud Daugherty. This dedicated approach to her new profession soon earned her a reputation once noted by field trial reporter and writer, Everett Skehan, “Sherry Ray is a fierce competitor, rated by many professionals as one of the most talented and productive scouts in the country and an excellent trainer in her own right.” Her tenacity and dedication would not only earn her this reputation but also as one who would help if you needed her and give her all when she did.

Sherry also raised the puppies born at the Smith’s Waynesboro, Georgia farm, often sleeping in the kennel house awaiting the arrival of a litter. She recognized early-on the importance of handling young pups for them to rise to a championship level.

Elwin and Inez Smith held Sherry in such high esteem that when Harold was called to military service or incapacitated due to injury they were confident that Sherry could carry on alone. She never let them down.

Sherry Ray Ebert more than fulfills the criteria a candidate in consideration for the Hall of Fame is expected to meet.

1. An Individual’s contribution to the sport of field trials is of the highest priority.

Over the past 5 decades, Sherry:
• was a founder of the famed Ga-Lina Amateur Field Trial Club.
• worked on fund raising efforts for the AFTCA 20th Century Fund.
• conducted seminars for the AFTCA to attract new participants into the sport.
• has generously contributed her time and expertise helping amateur handlers improve their skills and achieve success with their own dogs.
• has served as an ambassador to the Japanese field trial community.
• worked tirelessly to help defeat North Dakota House Bill #1499 in 2009, which would have prevented out-of-state professional trainers from training in that state in the summer.

2. The sport is better because of this person’s involvement with the game.

During her long involvement in the sport, Sherry:
• was instrumental in the success of the Smith Setters breeding program for 32 years.
• scouted 25 champions to 60 championship titles, four of those champions are in the Field Trial Hall of Fame and two are National Shooting Dog Champions.
• was the first woman to handle the winner in an open shooting dog championship defeating 75 of the countries top contenders.
• handled the winner of the English Setter Derby Award.
• continues to train and campaign English and Irish setters and won the Irish Setter Club of America National Championship and Runner-up in 2009.
• has judged and continues to judge some of the most prestigious open and amateur all-age and shooting dog championships in the United States and Japan.

3. A person’s contributions to the sport should have been made over a goodly span of years.

• Sherry has been involved in the sport of field trialing for 48 years.
• over that span of time, she has proven her dedication to the dogs in her care and to the entire sport through her generosity and honorable conduct.
• Her understanding of dogs and her ability to get the best performance out of each individual is legendary.
• She has mentored countless amateur handlers and watched them achieve success. 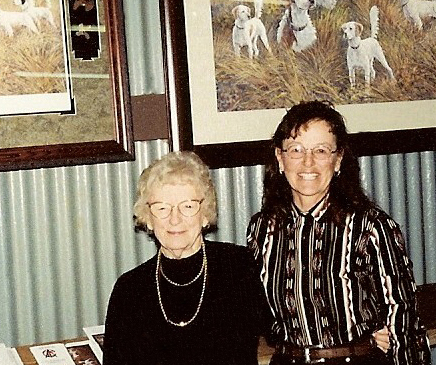 Strideaway is proud to have Sherry as one of our contributors. We believe her nearly 5 decades of dedication and generosity to this sport in almost every facet qualifies her for the distinction of being honored through election to the Hall of Fame. Please join us in your support of Sherry Ray Ebert.