Forces in the Gallop 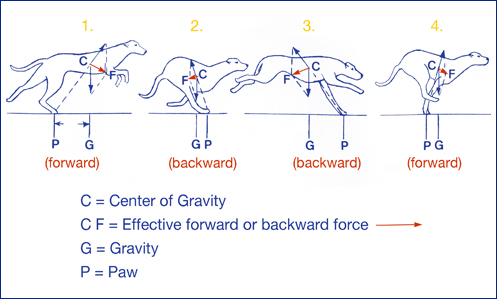 Pressure Plate tests prove that during gait cycle forward speed of the body is not uniform, even though variation is not visible to the eye.

The dog’s front paws carry the extra weight of the head and neck located in front of the shoulder. In theory and fact, the front paws not only carry the greater percentage of the vertical weight but also are responsible for stopping the greater percentage of the downward force due to downward momentum. Tests prove that the front absorbs nearly 3/5ths of the dog’s downward force while the rear absorbs only 2/5ths. For this reason the front foot is always larger than the rear front by about the same proportion.

* Pressure Plates were developed (early 1980s) for quantitative gait analysis. They measure the forces applied by a foot in any direction at any instant of time.

Find “Dog Locomotion and Gait Analysis” by Curtis Brown in List of Books.