I have seen a lot of amazing things from dogs over the years. Evolution or “Hack” did one of the most spectacular things I ever witnessed. I was scouting for my dad at the Continental Championship. Hack was a derby running in the all age qualifier. I found him a long ways in there and started bringing him back to my dad. For those who did not know Hack, he was a very fast dog. I had to ride fast to keep up with him. Being a young dog, he did not listen to me very well but that was okay. I was a very young boy and did not mind riding fast. All of sudden he slid about 5 or 6 feet on point. I was so excited I started calling point many times before I noticed he was laying down in the front with his rear up and tail straight up. My dad had answered me so I knew they were coming. I didn’t know what to do…but knew it would not be good for the judges to see the dog this way. While I was thinking, Hack slowly started to pull one leg out from under him and set it ever so gently on the ground. Then the other leg. Then he started to raise himself up. Watching that was putting cold chills down my back. By the time my dad and the judges arrived he was standing tall and beautiful on both ends. I will never forget that sight.

That is what the great ones are made of. Yes, he qualified that year to run in the championship. 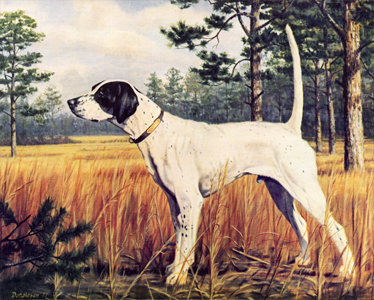 Five years and five championship titles later Evolution was featured in the 1979 Christmas Edition of the American Field. Here is an excerpt from that article by William F. Brown:

His record brought gratification to owner T. Jack Robinson and to handler Bill Rayl. But only the narrowest of margins kept it from being a great deal more extensive. There are recollections of stakes in which Evolution had performed brilliantly, with perhaps another title in his grasp,when fate intervened — the dog getting out of site on a mammoth searching cast and not being taken up in judgement, on occasion found too late on point.  This is not just what-might-have-been remembrances for the incidents actually happened and one transpired in the North Carolina Open Championship of 1975.

“What are Evolution’s outstanding characteristics? What better person to ask than Bill Rayl, the Fitzgerald, GA., professional, whose strings have cut such a wide swath in major trials during recent years.

“Hack”, Bill Rayl will tell you “is an extraordinary dog. He showed a wealth of natural qualities as a puppy, though not competing as a matter of course in juvenile events, and he was the most precocious derby.” The record shows he won first in Open All-Age competition during his derby season. (1974 North Carolina Open Championship).

“Whether in workouts or in trials, every time I turned ‘Hack’ loose,” Bill Rayl asserts, “I could count on an honest effort. He would run as big as the country, but his application was always exactly what I’d like it to be — he didn’t ever just play around, nor run merely for the exhilaration of doing so; he was always purposeful and though sometimes it was a problem to keep up with him, his main concern was to hunt for me, to handle, and if he would be gone for any length of time, you could be sure he had pointed birds somewhere! Evolution, in my judgement, could pattern a course with the best of them; he characteristically used the wind intelligently approaching likely objectives, and with experience his knowledge of finding birds and skill in handling them made me more appreciative than ever of his great natural abilities.

“In a few words,” Bill Rayl emphasizes, “Evolution possesses all the best natural instincts and inbred hunting qualities of  a natural bird dog with a heart as big as himself, absolutely no quit in him, and you can not only depend on him to give you the best every time, but feel secure in the knowledge that he is completely dependable in his handling of game. No scent situation is too difficult; he is blessed with quickness and an uncanny sense  location with positive attitude and style on point that enables quick diagnosis of exact location of his birds. He is especially adept in relocation though I must say that he seems to possess that faculty of pinning his game properly and is not often called upon to relocate. You know training dogs is an ongoing education and I must say that “Hack” has taught me many things, including fuller knowledge of what a good dog can do. I have certainly had my own horizons widened as to what dog’s capabilities actually are, and such broadened knowledge of a top bird dog’s abilities enables cherishing the highest ideal of bird dog performance standards.”

James A. Connelly, the Morgantown, NC furniture mogul, prominent in the North Carolina Open Quail Championship, the Rutherford County trials and other events in the Tar Heel State has been such a staunch admirer of Evolution from the dog’s puppy debut and had these remarks about Bill Rayl and Ch. Evolution:

“I remember when Bill Rayl was the scourge of all the top puppy competitions, each spring bringing out some brilliant running youngsters. But Bill Rayl knows a bird dog’s mission in life is to find birds for the gun, and with his sons, has developed outstanding all-age winners. Ch. Endurance and Ch. Evolution attest to this, not to forget others like Highway Man, et al. Bill Rayl has a remarkable rapport with his dogs, is a dedicated professional who knows there is no substitute for hard work and with his sons, Freddie and Eddie, the latter now chiefly concerned with shooting dogs, makes sure that all of the dogs gain the experience in the game fields that will improve their bird-finding and bird-handling abilities. Evolution, in my opinion, is a representative Rayl champion— a dog that runs big, looks good doing it, has a whole lot of endurance, handles kindly for the amount of country used, has outstanding ability to find birds and handles his game with style and good manners.”

For the entire article: Evolution_1979_AFChristmasEdition.pdf

Report and photos courtesy of the American Field Publishing.