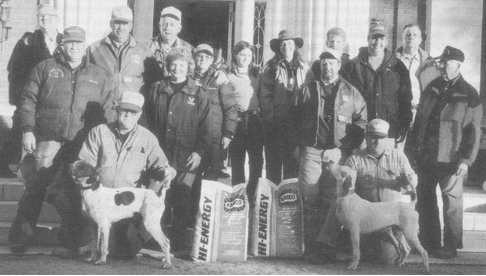 With a reaching race and five letter-perfect finds (one a woodcock), Barshoe Esquire cleanly claimed the Continental All-Age crown for handler Andy Daugherty and owners Tom Faller and Lee West. Earning his sixth all-age championship, the athletic tall eight-year-old liver-ticked pointer with solid liver head was at the peak of his powers for the hour and fifty minute race. He kept the front at good range, responded at distances and handled his birds with style, good location and stately composure. His race was high drama, unfolding scene by scene, as told in the running.

Miller’s Southern Pride, pointer male Derby by Miller’s White Powder out of Wiggins Dash, handled by Rick Furney for Chip McEwen of Fort Meyers, Fla., scored three good finds in a handling, forward race to secure runner-up honors, a huge accomplishment for any dog, but especially for a Derby. He also backed his bracemate once. He is a large and handsome white and lemon pointer with good conformation, style and composure on birds and shows a willingness to go to far places and yet handle. Bred by Ferrel Miller, he was purchased by McEwen in the fall, and Chip put his qualifying open win on him at Punta Gorda. He has placed in two amateur stakes. Furney has high hopes for his future.

Barshoe Esquire got his start, like many another good one, at the Lee West dog camp in western Oklahoma. He was a big gangling pup and an escape artist. When Judge West and pals rode from camp with Derbies to work, the pup would show up uninvited, having climbed the puppy-lot fence. Soon he’d be ahead of the young dogs in training, finding and knocking coveys with abandon. He earned the nickname “Dirty Dog” after getting into an oil-well grease pit and wallowing in the ubiquitous Oklahoma dust. Rather heavily marked, as a young pup he didn’t seem especially attractive but each time he showed up without invitation he did something to catch the eye of Judge West and his cronies….continues in the attached PDF (below) of the championship report.

Barshoe Esquire (Daugherty) began with good forward probes, then was gone for a bit as we approached Boy Scout camp. He rejoined handler at 22 and at 26 scored nicely in swampy bottom below cultivated field near dry pond, all in order. He began to reach nicely from here, taking the rising country through young limbed longleafs, then coming across the front and reaching again toward hilltop at Finlayson field. He then made a spectacular casts that carried him around plantation boundary with Findlayson and Brooks to the bottom beside dry pond (where the first afternoon course passes early). Here he was spotted standing by handler in the distance from hilltop, a pretty sight. Alas the birds had left him. From here he resumed his forward reaching pattern. At time he’d been unseen for 5 minutes and judges gave Daugherty 15 more minutes to show him. At 1:03 came call of point from Bill Hunt who’s wandered a shortcut to reach the gallery. Esquire had a covey under a live oak, fruit of a big independent and forward cast, and well handled. Overall a very good hour on the ground with two good finds, meriting a callback and consideration for best qualifier honors until the last brace.

It was 5:00 and Jimmy Edmundson had been told to have the bye dog, Cindy Crawford, ready to go if time permitted. The best had been saved for the last. The petite 1990 Southwestern Prairie Champion was loosed just south of the main entrance road and the action quickly started. She stood at 3, dead ahead, and nailed a running covey on a sharp relocation, style and manners good. Then she cast deep into corner beyond hard turn of course to be found by scout at 10. These birds also required a relocation, which she executed with flair and intelligence, style  again good at flush. She hunted to the front through fields leading down to the pond, searching with every step, her mind on birds. Edmundson rode calmly (or so it seemed) just in front of the judges and sang softly to her. At 26 she found birds in the stretch of thick mixed woods leading to the power line left turn, her style, manners and location good. She repeated this action on her fourth find at 30 and a second covey lifted nearby at the shot. Tension had begun to build in the small gallery. Everyone was pulling for the little girl, which was making a strong bid. She nailed another covey at 36, dead ahead, style, manner, location tops, and the tension really began to rise. Then at 39 she scored on the limb with a dug up find in the woods right of roadside hayfield, on a cast she’d sustained from her previous find, again all in order. “How much longer?” Jadie Rayfield asked. “Twenty very long minutes.” Judge Ebert answered with a smile. We crossed the road to go beyond the plantation office. Cindy now needed to show heels. She did, taking the right tree-line in a sweep all the way to the big cropfield beyond where the course becomes the first morning course run backward. Here Jimmy rode for her, calling. He gathered her at the far corner where she was still boring on toward Dixie’s entrance by the church. He heeled her back up the entrance road to the course path where we waited, reaching us at 57. She had just enough time to make the hayfield for a finish. When we rode to the hayfield Jimmy raised his arm to indicate she’d already crossed it and gone into the woods at the far end. Judge Bush and scribe rode through the hayfield for her finish; Judge Ebert rode to a live oak that scout Fred Dileo had pointed out as the spot where Cindy entered the woods…

At 1:03 came the loud call of point from Judge Ebert, soon followed by a shotgun blast. Judge Ebert had stopped her horse under a live oak to scan the cover ahead. After they’d been there three minutes birds rose from under her horse and there stood Cindy, not thirty feet away! She asked Marshal Ben Washington, Jr., to fire shot. A storybook ending to a storybook hour for a little fireball. Seven letter-perfect finds and a final twenty minutes of extreme ground race. Back at headquarters the sixteen finalists and their bracings were announced, and Cindy was top qualifier. 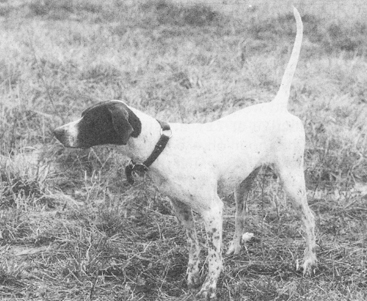 Monday dawned cool and clear, with a stiff northwest breeze. We were in for a treat in the first brace—Barshoe Esquire (Daugherty) and Quick Cash (Rayl). Tom Faller was riding for his Esquire, which found a bevy at 5, style, manners and location faultless as would be the case of each of his subsequent finds. At 14, just across entrance road, Cash suffered an unproductive. When they reached the hayfield beyond creek, Esquire took the right edge, Cash the left. Esquire was found on point at 20 on right, a woodcock requiring a relocation, which he accomplished with polish. At 22 atop the hill beside the hayfield Cash stood beside course path; again it proved unproductive. At 28 Cash stood where birds had just been seen lifting. Meanwhile, Esquire rolled ahead on course down to the valley before Pike’s Peak, then up it on the right side. Judge Ebert last saw him by a lone oak a quarter of a mile ahead. At 34 scout Colvin Davis called point. Esquire stood handsomely beneath that oak, the big covey before him in brush, a super limb find, handled faultlessly. Tension began to mount, gallery conversation subsided. At 38 Cash stood; Rayl asked Judge Ebert if she’d seen birds leave. When she shook her head he took Cash on without flushing. At 40 beside course path at Cadillac Pond Cash stood and Esquire backed handsomely. Rayl elected to pick up.

The course now was Esquire’s alone. He would make the most of it. Keeping the front to Cadillac Field he coursed across it to the front, then took the far field edge right to the woods at the far end for a showy cast. Here Andy rode hard to gather him. He then sent Esquire to the front and through the section beside big house hayfields and to the right turn corner where the first hour usually ends. Here Esquire hunted at moderate range, Andy seemingly not wanting to lose him in this bear trap corner. Esquire made the turn without problems and Andy let him roll up the rising country toward the “Y”. He scored another good find at 57 ahead. Andy had him at the “Y” where Esquire jumped into a watering tank. In the long field beyond, Andy rolled the dice, sending Esquire straight ahead. Esquire took the entire field in a cast that carried him a half mile to the right front corner at hilltop where he entered the cover. Andy continued to ride the course path just ahead of the judges, singing. When we reached the end of the long field and started up through woods toward the Gene field Andy and Colvin searched in the vicinity where Esquire had entered the woods. Here we had a sweeping view to right of the country where Esquire might logically have hunted beyond the field where he was last seen. All eyes were peeled in search of the dog but he did not appear. When we reached the Gene field the judges stopped the gallery and rode ahead to listen for the call of point and to gain the best view of the country to the right, left and ahead. We listened to Andy’s calling, tracing his ride by his voice in a big arc ahead and to both sides as he searched. Minutes ticked away…tension was palatable. We prayed the 37 minutes of grace time would not expire, for Esquire’s performance to now had been outstanding. Judge Bush sat his mount alone at the top of the hill, listening…looking…listening. At 1:40 just ahead of Judge Bush and dead on the line of the course path came the call of “Point!” Esquire stood in a dip beside a big lone longleaf pine. He had been there a long time but his composure was perfect, tight with a twelve o’clock tail, his head unmoving. The birds were ten yards before his nose and rose in unison with a pleasing whirr. Tension melted. “I’ve got about seven minutes, right?” Andy asked, and the judges nodded. Andy heeled Esquire the hundred yards to the front, then sent him ahead along edges of small fields where he hunted with zip as we watched until call of time, all thinking, “Don’t loose him Andy.” He didn’t.

A superb hour and fifty minutes had been enjoyed by all riding and we knew a championship standard had been set. A consistently front running, deep hour of probing, rewarded with five splendid finds, one on a woodcock, the kind of performance that thrills observers and brings great satisfaction to handlers, scouts, owners, breeders and dogs, reflecting endless hours of toil and thought. 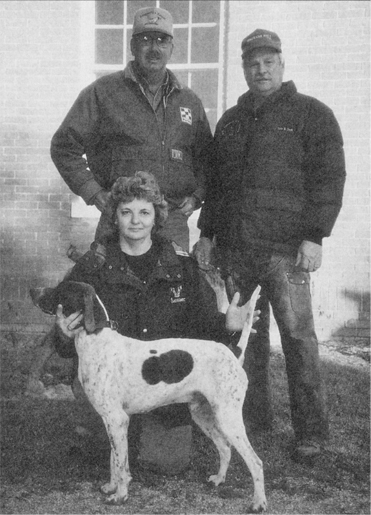