I met Robert Wehle, Dick Shear and Elhew Flying Dutchman on Sunday, November 3, 1974. I was at the Gladwin grounds after the Lake States Grouse Championship had concluded and had arranged to stay right through the conclusion of the Grand National Grouse Championship and Futurity. The Grand always started on the first Tuesday of November and it was the Sunday before.

I was standing in the parking lot of Alibi Hall when a dark green, wood-sided station wagon pulled in with New York license plates. I recognized Bob Wehle immediately and casually welcomed them to Michigan. Bob said they had just arrived in town and needed a place to work their dogs on some birds. Not being suspicious, I volunteered to show them some spots as I was going to work my dog too. Afterwards I realized that they had probably been to Gladwin more times than I and just wanted to find some new places. Anyway, I volunteered and took them to one of my favorite spots where I had found grouse a few days before.

On our way out of the Gladwin Refuge, with me following behind them, Dick Shear suddenly slammed on his brakes, jumped out of the car, ran to the rear hatch and opened the four wooden crates that were stacked in the back. Four liver pointers jumped out and ran to the front of the car. I opened my door, got out and walked to the front of their car and there was Elhew Flying Dutchman pointing a grouse on the side of the road and the three younger dogs backing him. Dick had seen the grouse on the side of the road and wanted to show off. Bob Wehle and Dick Shear were showman if nothing else. 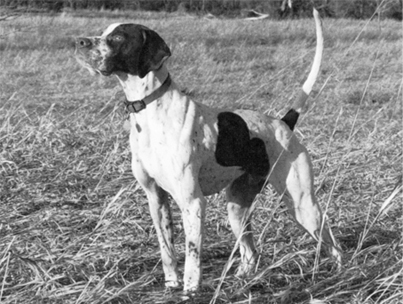 Bob Wehle was one of the most imposing and, frankly, intimidating men I’ve ever met. If you’ve ever seen a movie with Shaun Connery, they could be clones. Bob was at least 6’ 3’’ and built like a prize fighter. He had very bushy eyebrows and a deep, resonant voice. Every word he spoke was cautiously selected and you could tell he was used to being the boss. He had been raised in a very prominent family, was well educated and certainly made his presence known.

Dick Shear was somewhat the opposite. Although he was known and respected as one of the deans of grouse trials he was always unassuming, kind and gracious. He did have his opinions but seldom offered them unless asked. I headed a committee that started the National Amateur Grouse Championship and when I called to ask him to support our efforts with the AFTCA, he chewed me up one side and down another. He was insistent that there were already too many grouse championships and an Amateur would only distract from the Grand National.

After reaching my favorite cover, Dick and Bob took Dutchman out for less than an hour and then ran the three younger dogs at once. I was told that each of them had a well handled grouse find but I had stayed behind and can’t verify it.

The morning of Dutchman’s brace, Dick asked me if I’d scout for him. I was certainly glad to do so even though Dick had told me it would more than likely not be necessary. Dutchman had the reputation of being a hard running, hard to handle dog so I smiled when he said it and fully expected I’d be running all over God’s green earth looking for the dog.

When Dutchman was turned loose, in a light rain, what followed was probably one of the very best performances I have ever seen. He was a powerful, high headed, high tailed animal that moved through the woods with unusual grace. He rounded his casts to the front and when he popped out of the cover, Dick simply pointed his walking stick in the direction he was to proceed in and Dutchman responded immediately. Four times, at the end of long casts Dutchman had grouse finds with the birds pinned and precisely located. Birds had been scarce and four finds was an incredible feat. There was no doubt Elhew Flying Dutchman was the 1974 Grand National Grouse Champion.

After the announcement, the celebration and all the hoopla, Bob Wehle moved next to me, extended his hand to shake mine and thanked me for helping them. He then said “I know you have setters but I want to send you a dog.” I assured him that was unnecessary but in my heart I was hoping he remembered and meant it.

The following March, one evening after work, I answered the phone. It was Bob Wehle saying he had a dog for me. It was a liver male out of Elhew Huckster, had been born in January and was ready to go. Of course I was ecstatic and immediately made plans to add a third run to my kennels. Ten days later I picked up Elhew Drummer at the Saginaw airport and began my 35 year love affair with Elhew Pointers. 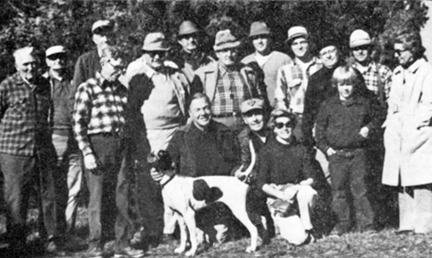 Photo and report courtesy of The American Field.