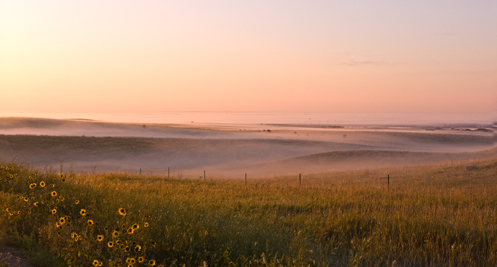 Writing about a field trial seems so insignificant. The seriousness so often attached to them, the bickering that comes along feel even more petty now.

And, conversely the joys should be sweeter, the romance of Nature on the American prairie with its far ridges and long draws and flushing game birds more precious. The horses that carry us, the dogs that perform for us more to be appreciated for the pleasures they give to those who are so very fortunate, and should be so very thankful.

Perhaps we are. Perhaps we were on that Sunday morning in August of another time when two young pointers hunted away from Chris Madsen’s barn across the pasture to the first pond, and on to the Ness fields. They were the start of a very good field trial, one of impressive performances with a feeling of sportsmanship, of appreciation of where we were.  It was where we chose to be, with the freedom to make the choice, however trivial the pursuit.

No hint those men wishing to impose their views and restrictions would act with such viciousness that human suffering and death would pale on our screen of concerns the sport loved by our ardent few.

But still in August the world seemed quite right, the prairie quite beautiful, that little part of the world wearing a soft white veil of morning fog. 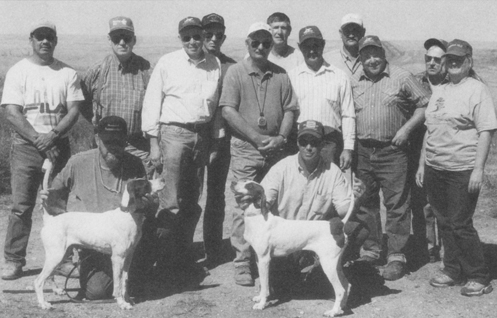 The 2001 All-America started with fears about game. There should have been none, for nature provided plenty. Neither was it a stake where the judges had no choices. There were four, perhaps five, performances that at other times could have been honored with a championship.

The choices they made were appropriate.

Bernie Matthys and Bobby Hartwig on the Madsen Ranch.

The winner came along on Wednesday when Bernie Matthys, editor of the AMERICAN FIELD, rode his first prairie trial. South’s Swashbuckler was in the first brace. Double Rebel Sis in the third brace of the day, which he also rode. A steak  cookout was held in Matthys’ honor that evening, most informal with Fred Dileo and Billy Wayne Morton as chefs, Peg Hartwig and Talisha Hicks providing the extras.

He brought the latest edition of the FIELD, and before the running congratulated Ed Husser with the news that Brush Country Spectre had been elected to the Hall of Fame. It was good news to the multi-champion’s developer and handler at a place where Specter, in 1998, was found near death, to expire en route to a Chamberlain veterinarian. That was during the running of the Iron Nation.

It was remembered that year (1998) before lunch there were a number of scratches because of the searing heat, moving Swashbuckler to the first afternoon brace. Husser was not happy about it but when the hour was over the party had been treated to a brilliant performance by a powerful pointer which ignored the heat, twice found conveys and clearly was the winner.

His breeder, Dr. David Dickey of Evans, Ga., owns him. Husser is due credit for the design.

(2001) The skies were clear and the sun would soon heat the land and the wind would blow out of the south when Swashbuckler left the barn area and went to the far right, for point to be called within five minutes. A covey was scattered and his stance was high and certain. His next birds were after going into the Ness land, the course swinging to the left and point called a long ride to the right, when another covey was in front of him, his style not so high, but he was intent. The third came along after the big loop was made, down through the creek area, and again the location was correct, manners right, manners not as high as the first.

He hunted so successfully with power in his stride, perhaps not gathering as quickly as in 1998, but just as determined.

On the prairie, class is not the simplistic view of how high the tail might be but how willing to complete the search with undaunted range, with power and with success in finding game. Thus many have found those who have the heart and athletic ability to be best suited as successful sires — the prairie test. It must be seen to be truly appreciated.

The runner-up, Double Rebel Sis, drew grounds in a different part of the ranch than the winner, before the creek that cuts through to Cedar Creek. After the crossing she went to the left and a good distance pointed, a chicken flushed for her intent stand. Ten minutes on she stood again to the far left front but nothing was put up. She topped the ridge, an impressive cast, and before the high pole gate of the alfalfa field, to the far right front this time, she handled a large covey of grouse perfectly, and finished well.

Sis was bred by her handler, Fred Dileo, whelped August 15, 1995, and she is owned by Frank and Mercy Fonseca, whose Funseeker’s Gem won the Championship herself in 1999.

John Criswell’s report appeared in the October 6th edition of the American Field, just short of a month after the 9.11 attacks on our country.