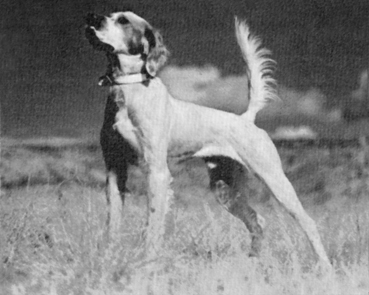 Tekoa Mountain Sunrise, powerhouse four-and-a-half-year-old white and orange setter male owned by Stephen and Jrene Asher of Boise, Ida., became the third setter of this championship to win the title. The other two were Peerless Par in 1939 and Flaming Star in 1968. Jack (his call name) under the whistle of Rich Robertson secured the title over 53 other contenders with a beautiful hour on the ground and three perfect finds to the front.

When the new champion, Tekoa Mountain Sunrise was picked up, anyone who had watched him knew he would have to be beat. This is his first prairie title and it makes him a seven-time champion. His reputation precedes him at his young age with all he has accomplished in his career.

Rich Robertson acquired him at three months of age, and at ten months Stephen and Jrene Asher took over ownership and he’s been with Rich ever since. The rest is history. Rich sat back and let Jack do his own thing, running and hunting all done in first class prairie style, and befitting a champion.

Condo’s Bo — Tekoa Mountain Sunrise. Bo was AWOL by 20 minutes. Sunrise faced the wind from the breakaway, out front checking the objectives as he went. He put more and more distance between himself and handler as he sped across the lane behind the old house site while Robertson pointed him out. Handler raised his hat at 14 where Sunrise could be seen standing straight to the front. We rode hard and it took us around a minute and a half to reach him. As we arrived, chickens started lifting. Jack stood stood tall and proud as Robertson dismounted and flushed in front. Taken on he kept straight ahead and at 20 he stood again by Choke Cherry Lane looking great in his motionless stance out from the bushes. Handler flushed the Huns and took Sunrise on. Near the little Alfalfa field Sunrise took a tour past this field into the next field where he came around on his own to continue his running and hunting. He impressed in the fenced pastures where he was all business in his canvass of these big spaces. Across the road in the thistle field he hunted objectives up the left side, crossed ahead, went up the shelter line and forward to the end of the field. Handler heeled him across the road and let him go. He flew to the front on the left side, over the far rise where he peeled right and was spotted checking the bluffs. As the course was bending right, Sunrise was not in sight. Scout was sent to check. We saw Colvin Davis, scouting, appear to raise his hat so we started to him and as we got closer, we realized he was only indicating the direction Sunrise was heading up ahead, still not in sight. Robertson searched as the seconds ticked down. Just moments before time, Robertson called point far ahead where Davis had pointed Jack out earlier. As we arrived the covey of chickens left him prematurely. He stood beautifully as handler walked in front to flush and time expired. 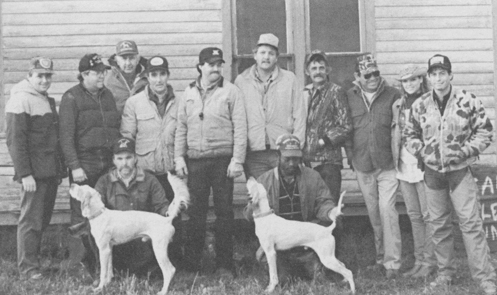