2006 was a special year. Not just because I placed a few dogs, but I happened to be in the gallery to witness the dogs that beat me.

The last brace of the Richard Tuttle Memorial Classic, the last trial of the year, drew Dave Bogel’s Wycoff Run Sally and my brother Mike’s Moon Shiner. I was assigned scouting duties for Mike.

I had campaigned Sally for Dave in her fourth or fifth season and really enjoyed having her. She was special! She was a medium sized bitch and I always thought her legs looked about one inch too short. But when Sally ran, she didn’t think so! I probably wouldn’t have walked this brace if not for the scouting deal. Sally was now nine or ten years old. Watching an old favorite in their later years is sometimes like trying to decide weather or not to visit an old friend in a nursing home. Sometimes it’s better to only have memories of the younger years.

At this point in the trial, I had two good races with grouse finds. Tony Bly’s Forward Loop Lefty and Steve Chiapinni’s Chip Peppy Lepew. I was feeling pretty good.

There were only five people at the breakaway. The judges, the handlers, and myself. Stake manager, Chip, handed me the marshal’s walkie talkie with a grin and said, “you’re in charge, pay attention.” The first fifteen minutes of course two at Loleta consists of scattered clumps of pine and spruce with high bush blueberry in the wet areas. Five minutes in we made the left turn onto the two track with both dogs far ahead right, Sally the deeper of the two. Just then a grouse lifted from the far end of the pines with Shiner involved and his leash was called for. After a bit of noise rounding up Shiner, we had no bell for Sally. At Dave’s request for help, judge Kelly Sheppard, Dave, and I started a search of the stream bottom on the right side. After five minutes, I decided to work up the slope along the end of the pines where the grouse had lifted. As I approached the two tracks, I could see the other judge standing fifty yards ahead. Just then a grouse roared out between us and there stood Sally. I yelled to Dave, now eighty plus yards away, “Dave, fire your gun!” I collared Sally to the two track and Dave showed to cast her off.

The back half of course two is open saw timber. In places you could shoot a deer at two hundred yards. Scattered beech clumps provide the only good objectives. Sally’s race was forcing a steady pace. Her big bell was barely audible with the only visual contact the occasional glimpse of her flashing across the front. At thirty minutes, the topography slopes down to the right into a creek bottom. Sally was well ahead in this area when her bell faded… or did it stop?

Dave turned and asked me to take a look. I advised Dave that this was a productive area and he may want to do the looking.  As we approached a beech clump, two grouse blew out, then a single. From atop his horse, Kelly barked, “she’s standing in there Dave!” At the shot two more grouse lifted. Sally never flinched. Down the back stretch, the pace never broke with glimpses of Sally showing no sign of let up. At the fifty minute mark I reached for the walkie talkie, “Chip are you there?” “Yeah, how’s it going out there?” “Well Chip, if this little bitch can keep this up for ten more minutes, we can forget the blue ribbon.”

As the judges rode off, I shook Dave’s hand and said “Well Davey, she did it for you one more time.” He said with a grin, “do you think so?” “There’s no doubt.” And the judges got it right. 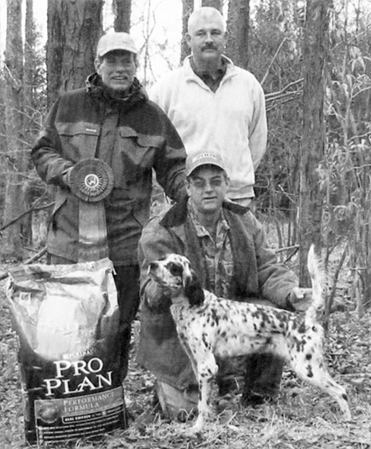 Photo courtesy of The American Field