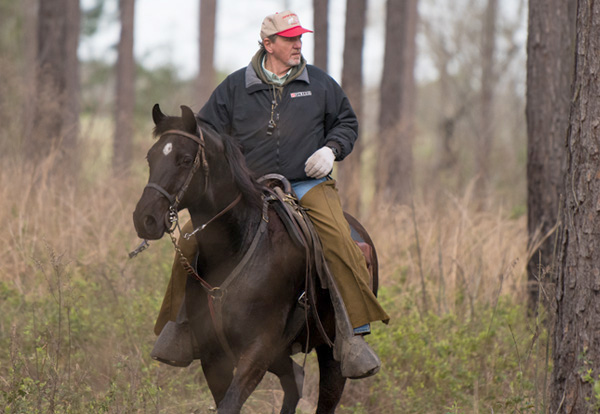 “Our fingerprints don’t fade from the lives we touch.”

As a headliner in the field trial world he captured more than a hundred Championship titles with all-age and shooting dogs, four National Championship titles in the all-age world, five Purina Dog of the Year Awards along with five Handler of the Year Awards. Many of his dogs are in the Field Trial Hall of Fame with another for sure going in this year, two-time National Champion Shadow Oak Bo. There are many other awards and milestones in the sport that Robin achieved. More importantly was his relationship with his dogs, Robin had a way with them as could be seen in the way he touched them. He wasn’t aware of it at all. He also had an impressionable way with people, he would have never thought of himself as a mentor but he truly was. Through the years the young men he took to Canada or had helping him in Georgia learned a great deal from him, not just about dogs and horses but about life. He had a way of making a person want to do their best and want to learn. There are dozens who are now dog trainers either for the public or on private quail plantations that Robin mentored. These young men are the same in being polite, respectful, and maintain the high work ethic which their mentor never strayed from. They adore this sport as they adored Robin. Just the other day one of them told me that Robin instilled the confidence in him that he could do this and could be successful. He said Robin told him just believe in yourself and your dog, treat your dog like you do folks because they have feelings, too.

Robin was a devoted husband, father, grandfather, brother, and uncle; family his top priority, the loves of his life. His family of friends are great in number, each with their own memories of Robin. All the young people he mentored will carry on with the values he instilled in them by just being himself. He will go into the Field Trial Hall of Fame as his father and brother and many others his father, John S. Gates brought along and rightfully so but he will be remembered most for all the lives he touched.

In the end it is not how far you ran but how well you ran the distance you went; Robin had a great run! He will be loved and missed forever, his presence always near to those of us who cared so deeply for him. See ya down the road, Big.

We thank Pointing Dog Journal for publishing this in their News section of the Vol. 28, No 3. May-June issue available through their Online Store/Back Issues 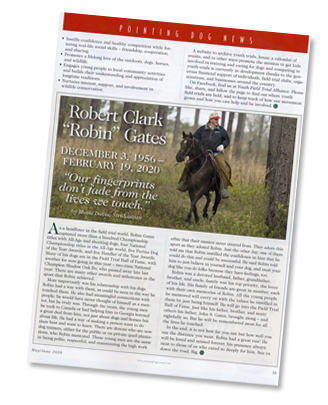