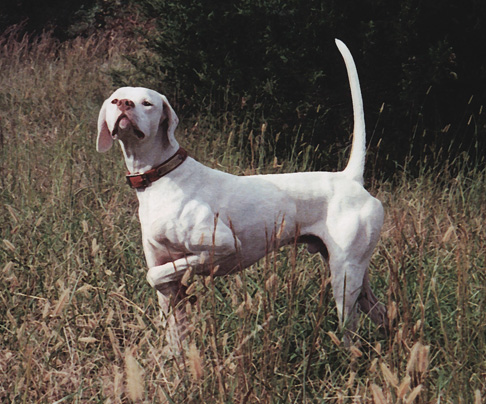 From the American Field Report of the 2005 National Championship:

The roadway to the afternoon starting point was jammed with vehicles, a Percheron-drawn gallery wagon, riders and roadside fans awaiting the start of the sixth brace: Miller’s On Line and Sir Lancelot.

The excitement was electrifying, the defending champion On Line (Rick Furney), with most of the competing handlers riding and the young and vibrant challenger, Sir Lancelot, 74-year-old Hoyle Eaton, attracting a myriad of fans and supporters.

Co-owners Chip McEwen and Mike Furney were riding for their “Jack”, while co-owners Richard Tollison and Danny White were in the gallery for “Bud”.

The pair was away under an overcast sky with the promise of brightening, On Line straight away, Sir Lancelot angling right and taking that line to the fore. At 14 “Point!” came from near the Ames Road. Bud was across the roadway, a horde of onlookers assembled at the spot from the stream of vehicles strung along the road. He was handsome and tall, head and tail high and tight as handler approached, birds running in the cover and flushing as Eaton stepped in, then shot, this action met with appreciative applause from the roadside bystanders.

Back across the road Eaton had him at heel initially, then shot him away when Bud whirled on cover edge, stopping in what seemed mid-stride, pointing. No. 2, equally handsome and well executed, quickly went into the book.  Both dogs crossed Ames Road in tandem, passed Cedar Hill and made the turn at the horseshoe and were in the Chute. Judge Bush suggested a dog standing some distance ahead. Sure enough Bud was pointing some 200 yards straight ahead up a small rise to the side at 46. Eaton tried near him in front then tapped him for a relocation. Bud moved up six steps, stopped and stood, firm and positive. Eaton moved further out where he flushed a bevy, Bud’s manners perfect at flush and shot. Off to the fore, near the old Agronomy Unit, he stood again at 54, Jack coming on from the rear and standing to back about six feet behind. A single flushed out the back side of the thicket line for No. 4.

The pair was off toward Prospect Church where handler Rick Furney indicated the dogs in bicolor at 1:10, Bud pointing and Jack backing. Bud’s head was turned a bit to the side where Eaton flushed the birds, both dogs mannerly, another bevy handled perfectly. He scored No. 6 just eight minutes later. Just past the dairy pasture turn, scout Steve Hurdle spotted the pair just off course path along old fenceline beneath cedars at 1:28, the twosome credited with a divide find, birds coming up near both dogs, both well mannered at flush and shot.

They went down incline into Turkey Bottom and just before deep ditch before adjoining Alfalfa Bottom point was called. When the judges emerged from the ditch, both dogs were standing on the right edge about eight feet apart; birds were flushed between them as both handlers shot, their dogs firm and mannerly for the work.

Some minutes later, on Pine Hill, Eaton signaled point. He indicated that Bud was in thick tangle but was not seen, the dog emerging from the heavy brush on his own.

On Line tallied a nice find at 1:51, pointing at end of old fenceline, a credible piece of work during which a shot was heard ahead, Lancelot scoring on a covey near the old Ag Shed at 1:52.

Both dogs were soon ahead and pointing again, Steve Hurdle locating Lancelot off to the side at 2:01, his stance firm and positive, his right ear flipped on his head, another bevy in the books, Jack adding one of his own nearby. Eaton signaled point again at 2:10 but waved it off. Soon after Jack was pointing on edge in Caesar’s Ditch and on to the Cox’s Ridge stretch, Bud was out of sight and both Eaton and Hurdle struck out to look for him. Jack was ahead through the area and just before the Fason Bottom at 2:25 Lancelot appeared ahead. “Anybody riding the front for Hoyle?”, judge White asked. David Shoemaker, who has scouted the dog for Hoyle, responded and took over. At 2:37 Bud stood just off course path, posed again with high head and tail. Shoemaker arrived to shake the heavy cover to rouse the bevy, all well at flush and shot.

The dog was sent up the forward incline and when the judges (Dale E. Bush, Charlie Frank Bryan, Jim N. White) reached the crest birds were in the air, Lancelot standing some distance directly ahead in course path near small sapling island posed high and tight. As the judges rode a straggler flew and temptation conquered, Bud in hot pursuit, returning to the “scene of the crime” moments later.

Ripley, Miss., Jimmy D. Downs epitomized the sentiment of those riding as he slumped in disbelief onto the neck of his horse as a dumbfounded silence fell over the large gallery.

“Jack” was not in sight, later found in the heavy cover near where Sir Lancelot had scored his find at 2:37. 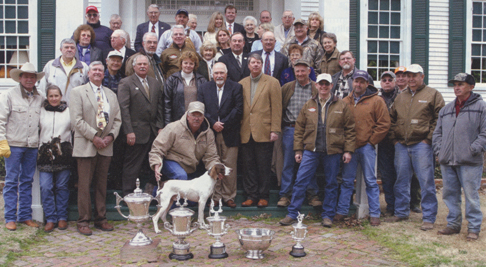 Sir Lancelot — Gone But Not Forgotten

A few days ago I pondered about all the things Riggins White Knight taught me, he being my first field trial dog, and how handicapped he was those first few years of his career with a greenhorn at the helm.

Sir Lancelot was even more handicapped with an old man who didn’t make many trials and not physically able to do a dog of his caliber justice. Both dogs had the intelligence and biddability to overcome the obstacles before them. Both tried to tell me minutes before they died that they were dying.

I don’t think anyone who saw Lancelot’s performance at the National Championship with eleven covey finds and 15 minutes to go when ordered up will ever forget it. I know I will not, even the chase on the eleventh covey that I did not get to see because I had gotten behind.

I will never forget his performance at the Hobart Ames Open All-Age, running as a Derby, having seven perfect covey finds in an hour. No, he did not get a placement. Lancelot was a true all-age dog that went bird hunting in a big way.

There is no question when we lose a good friend there is a space inside us that is void. There is also an empty space when we lose a companion of “x” number of years, meaning Lancelot, when a dog gives you 110 percent every time down and feels no pain when the going gets tough and all he wants is a chance to perform for his master. 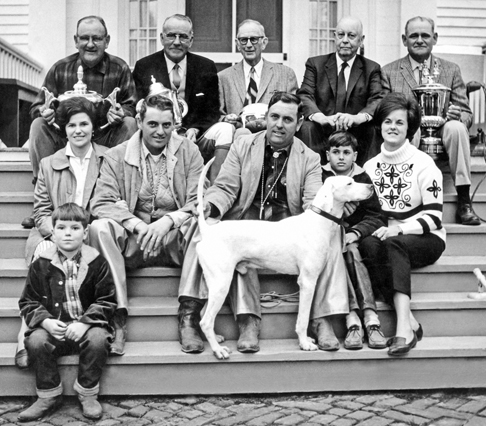 1968 National Championship winner Riggins White Knight posed by handler D. Hoyle Eaton. Sitting behind are judges W.A. Dumas and Joe Hurdle; on either side of Hoyle are family members including wife Betty and son, Joe.

And for more great field trial history, please support Stridaway by purchasing products in our store!