Mazie and I had hoped to have the new Strideaway website up by now but it is still in the design phase with funds needed to pay for the programming. We’ll get there! The new CMS site will offer much easier navigation to find archived articles and visuals and much better opportunities for our advertisers. We’re always looking for ideas for articles so long as they have a positive impact on the sport. I have back issues of the American Field from about 1957. Much of the content is still of great relevance and interest. But we also want to present more current thoughts about the sport from a broad spectrum of trialers from across the country. Thanks to all those who have already contributed so generously to Strideaway for the past three years. Please keep it coming!

We have some great articles in the works. If you have suggestions and ideas, please let me know. 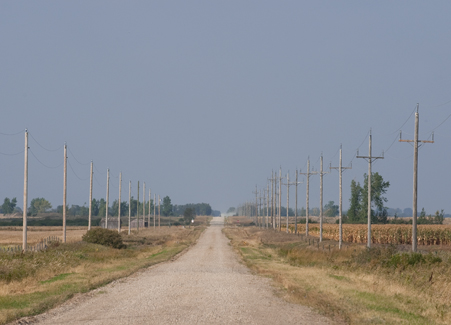 2011 marked my 5th visit to Broomhill and the 4th time I was there for some of the trials (Broomhill Open All-Age Classic, Manitoba Championship, Pelican Open All-Age Classic and the accompanying derby stakes). Last year I photographed almost all of the Manitoba Championship and Pelican Open All-Age Classic. I took some time out to run my own dog in the Pelican and judged both the John S. Gates Memorial Derby Classic and the Pelican Open Derby with Strideaway cohort Mazie Davis. What a blast that was! This year I spent some time on the prairies watching and working my own dogs so photographing the trials was more sporadic. Again, I had the privilege of judging the John S. Gates Memorial Derby Classic with Mazie.

Weather, as we all know, is always a factor at field trials, especially wild bird field trials. Spring on the Manitoba prairies brought rain and more rain. Much of the land in Broomhill was too wet for farmers to get their crops in. Subsequently, the courses used last year had to be rerouted but still each had to utilize areas where nothing had been planted this season. The latter part of the summer was very dry. Combine that with especially high temperatures (in the 90s), clear skies and you get the conditions under which the trials were run. During the last day of the Pelican, fires nearby in Saskatchewan brought an acrid smoky haze that filled your nostrils. Image a dog trying to pick out the scent of birds. But the birds were there, ridden up, driven up and run up as I did when Joyce Harmon, dog wagon driver extraordinaire, spotted a large covey of chickens on the road ahead. 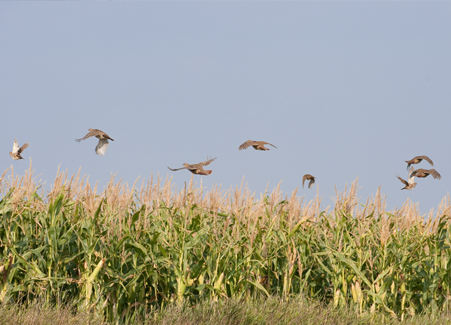 Chickens flying back into the corn located on the edge of alfalfa fields at the end of the first course.

They were in the exact spot where Patriote pointed not an hour earlier at the end of the 4th brace of the Pelican. When he was sent on, he searched the edge of the corn field he pointed towards but he did not establish point again. When I flushed the chickens trying to get a shot, they flew right back into the corn. Travis Gellhaus’ Zumbro Ace had a beautiful stand in that same area at the end of his race on the first day of the Manitoba Championship. I’ve never been there when chickens were not found in those alfalfa fields or the tree lines that separate them. 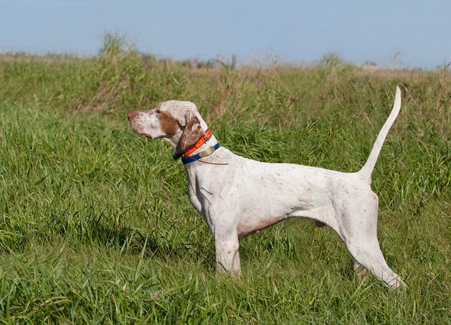 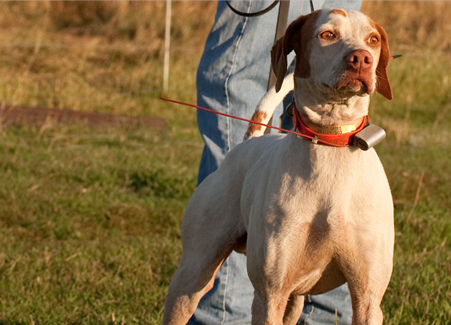 In the Shadow, winner of the Pelican Open All-Age Classic 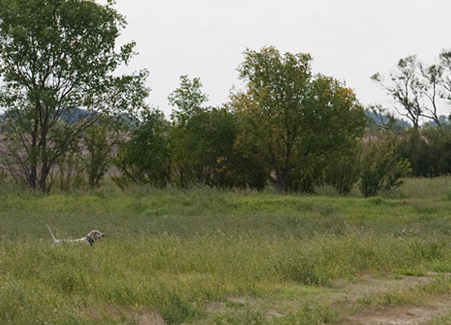 Patriote pointing in the alfalfa towards the corn at the end of his run in the Pelican. 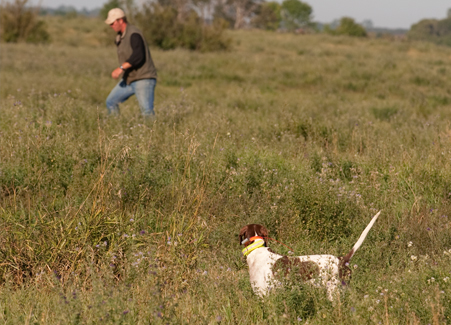 Travis Gellhaus attempting to flush for Zumbro Ace pointing in the same area several days earlier in the Manitoba Championship.

But dozens and dozens of old field trial reports confirm that conditions on the prairies have often been harsh. I’ve witnessed them myself — extreme heat and cold, wind and driving rain.

Several dogs whose braces I watched, I thought, put down tremendous prairie all-age races…the kind that keep you coming back to the prairies to witness again. And yes, a few more good finds would have increased the thrill. I look forward to judge William Smith’s upcoming report in The American Field. His judging partner was Ontario pro trainer John Reed. I first met John years ago at NSTRA trials in Ontario and Quebec. His summer training camp is south of Broomhill in Lyleton, MB. John has been coming to the trials for many years. This year he also ran a dog in the two derby stakes. 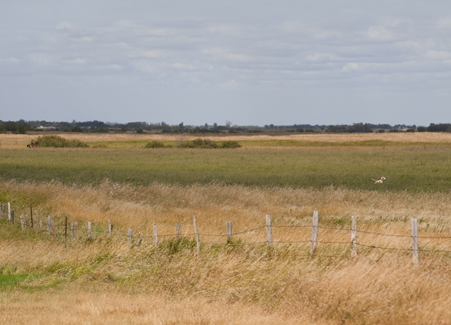 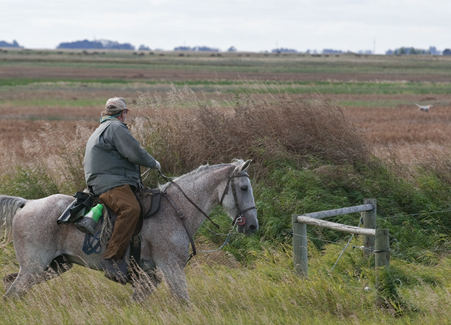 Robin Gates handling Distant Shadow who can be seen in the background. Pelican Open All-Age Classic. 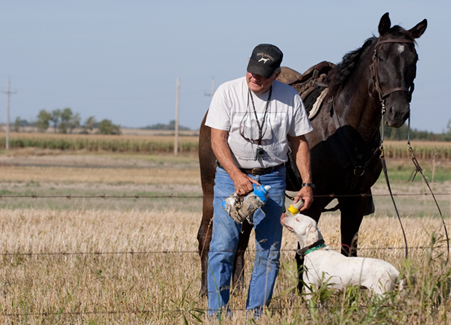 Colvin Davis watering Phillips Time Line at the end of his race in the Manitoba Championship. He was named Runner-Up. 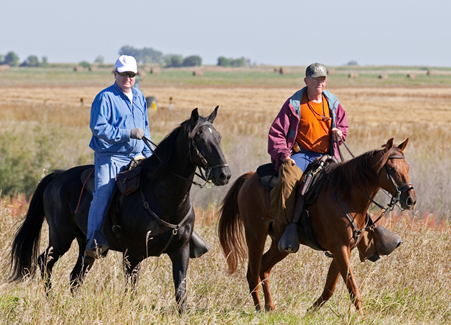 I heard rumors Travis and Jenny Gellhaus were coming well before I left Maine. The last time I saw Travis was in Marienville, PA at a grouse championship! And I had not met his wife Jenny before…it was great meeting her. Travis has had an interesting career and I am happy to see another young handler competing in the open All-Age game. Shannon Nygard showed up from Montana to watch Distant Shadow and a derby she has with Robin Gates. She also ran and placed another of her dogs in the Pelican Derby. It’s hard not to notice the increasing number of talented and dedicated women there are in field trials — developing young dogs, training, scouting and handling. 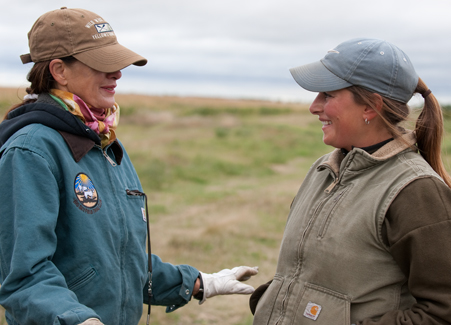 Grouse dog trainer, Joe McCarl had been to Broomhill a couple of times in past years, visiting from his camp in North Dakota both to train dogs and to watch the trials. This summer the Davis’s invited him to spend more time there training his string of dogs. Joe took my place judging the Pelican Derby as I had to leave the morning it began. He and I spent some time during the trials working dogs. Thanks to Robin Gates who sent us to some great spots behind his camp where the dogs found lots of chickens. 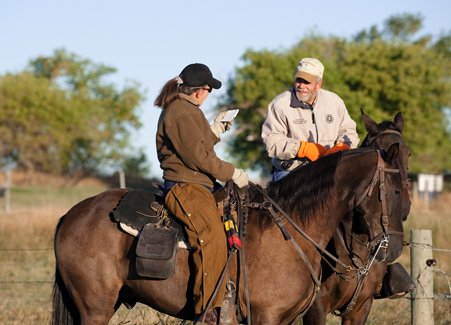 I am designing on a book of my collection of photos from Broomhill from 2006 through 2011 that will be available some time before Christmas…I hope!! 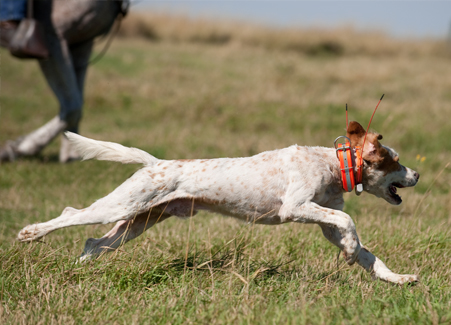 Thunderbird Punch Buggy at the breakaway of the 4th brace of the Manitoba Championship. 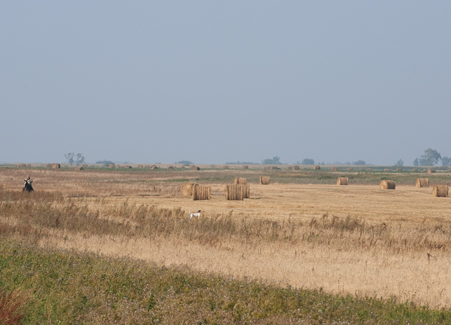 Hunter Gates scouting for Shadow’s Perfection in the 6th brace of the Pelican. 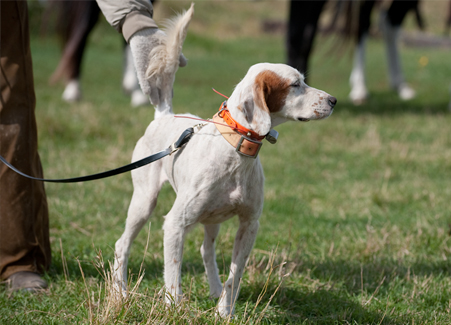 To see more shots from my trip to the prairies this summer please visit my Photo Website. Click on Galleries in the navigation on the bottom of the screen to find 2011 Broomhill Trials. There are also a few new photos in Bird Dogs.