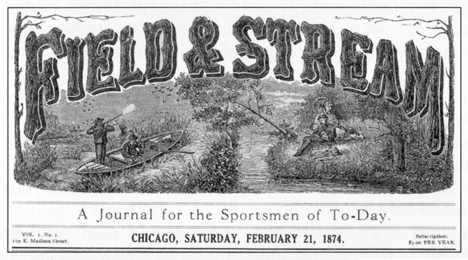 Masthead of the first issue of Field & Stream, 1874 which featured columns by Dr. Nicholas Rowe on the relative merits of pointers, setters and other upland bird dogs.

The Chicago Field was initiated February 19, 1876. It offered a free registry of sporting dogs in the United States.

1900 masthead of The American Field by John Martin Tracy.

1941 masthead, still the Tracy etching adapted to show the National Champion in the center.

1960 masthead — a new illustration by ? and the crest with the National Champion. It no longer reads “The” American Field.

1974 masthead, again with yet another new illustration.