The dog under consideration must have and display great bird sense. He must show perfect work on both coveys and singles. He must be able quickly to determine between foot and body scent. He must use his brains, eyes, and nose to the fullest advantage and hunt the likely places on the course. He must possess speed, range, style, character, courage, and stamina—and good manners, always. He must hunt the birds, and not the handler hunt the dog. No line or path runner is acceptable. He must be well broken, and the better his manners the more clearly he proves his sound training. Should he lose a little in class, as expressed in extreme speed and range, he can make up for this, under fair judgment, in a single piece of superior bird work, or in sustained demonstration of general behavior. He must be bold, snappy, and spirited. His range must be to the front or to either side, but never behind. He must be regularly and habitually pleasingly governable (tractable) and must know when to turn and keeps his handler’s course in view, and at all times keep uppermost in his mind the finding and pointing of birds for his handler.

The National Championship and its arduous test of three hours hard hunting is a rigid examination of a bird dog’s qualifications. There is little wonder that a dog which emerges with honor in this grueling grind deserves the highest accolade, and it is notable that winners of the National have wielded important influence on their breeds.

The stake is not yet half completed. Twenty dogs made their bids in the first five days of the running, for Monday had been rained out. It is too early to anticipate the outcome of the stake. However, a few remarks pertaining to the performances thus far might be of interest. It can be said that it has been a mighty interesting feature thus far, with birds plentiful, huge galleries and some highly creditable exhibitions. True, those perfectionists who expect everything ideal might find little things to criticize, yet the enthusiasm of the large followings reflect the sustained interest in what has been witnessed.

The conversation dog up to this point is Riggins White Knight, the almost totally white pointer belonging to R.W. Riggins of Knoxville, Tenn., and handled by Hoyle Eaton. The dog was credited with eighteen contacts. Perhaps he did not satisfy the judges owing to inexperience and lack of polish in some circumstances, yet it cannot be said that he did not appeal to them for no observer who admires the essential virtues of a top hunting dog could fail to have his pulse stirred by “Bud’s” sterling performance. He may not be the eventual winner, but at least up to now he has created the most conversation among owners, handlers, and spectators generally.

Of the first ten dogs to make an appearance, four or five commanded attention with good searching, fine handling races and sufficient game contacts. Seairup, Spacemaster, Briardale Pensive, Rocky Creek Ben, and War Storm, to name them in order of appearance and not any preference for the excellence of their heats, all had vociferous admirers. 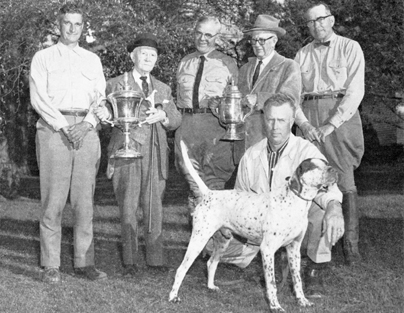 Spacemaster, sturdy stylist and rugged performer, is the 1961 king of the nation’s bird dogs. The seven-year-old white and liver pointer dog, owned by Mr. and Mrs. Ralph E. Daniel of Durham, N.C. handled by Paul Walker, captured the crown in the 63rd running of the National Championship which attracted 48 starters. Spacemaster won the title on his three-hour appearance, which was made on Tuesday afternoon, February 21, the first day of the running, during which the Daniel pointer was credited with fourteen game contacts. It was not a brilliantly rendered performance, but a workmanlike exhibition, thus, as frequently happens in the classic event held annually over the Ames Plantation at Grand Junction, Tenn., the outcome was in doubt right up to the very moment of the announcement of the winner. There were nearly half-a-dozen aspirants to the crown whose owners, handlers and admirers felt they were in the thick of contention, which is an enlightening commentary on the keenness of the competition that developed in the stake. 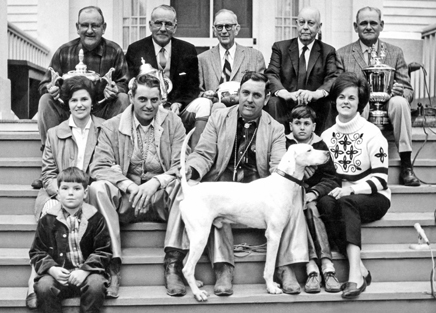 Riggins White Knight, white and orange pointer dog, whelped February 8, 1959, owned by Dr. Nicholas E. Palumbo of Baltimore, MD, handled by Dexter Hoyle Eaton, who has had him throughout his career, was awarded the title of the 1968 renewal of the National Field Trial Association’s event at Grand Junction, Tenn. “Bud” ran on Thursday, February 22, Washington’s Birthday, under arduous conditions and chalked up nine finds. The nine-year-old pointer was a tired dog after the rigorous trek and finished on nerve alone, consequently he was not an unanimous choice. One had to admire his fortitude, his indomitable will, and sympathize with the conditions under which he ran. Many do not like a second series, but the controversial verdict could have been avoided by a direct confrontation, running White Knight and Paladin’s Royal Flush, the other top contender, until, as the saying goes, the hair slips.

The irony of fate, Riggins White Knight was a veritable sensation when he ran over the Ames Plantation in 1961 as a Derby and had he been given the title then, it would have been wonderfully popular. Now there will always be an argument. For Paladin’s Royal Flush, when he ran the second week, had decidedly more favorable conditions, but his exhibition for three hours was certainly more impressive. It is the responsibility of the judges to take all factors into consideration and White Knight’s tough assignment indubitably entered into the analysis, but it is speculation that had he had similar conditions to those Flush ran under, that he could have surpassed the powerful race the Roger M. Kyes pointer delivered for John Rex Gates.

Maybe it is a good thing when there is a difference of opinion. It certainly adds spice. All conceded the expertness of the judges even if not concurring in the final verdict.