The Canadian Prairies — The Reason 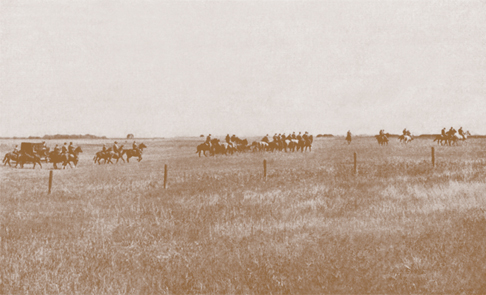 A seasoned trainer/handler of all-age dogs who has been most successful north and south of the Canadian border wrote the following to a younger fellow who had acquired a young dog that was proving to be a good’un. Following a conversation about the upcoming Canadian prairie championships, the younger man told him his dog would be competing on the prairies but south of the border as it was all the same.

One of the upper echelons in wins by men and dogs in field trials has always been on the Canadian prairies. Has this somehow changed in the way of thinking of today? Is it not the names of dogs that proved their worth on these prairies that are noted in pedigrees of today’s champions? The answer to this question is an easy one for sure, yes. However, to the first question it is not that easy. Why dog trainers don’t cross into Canada is on the individual; the reason owners don’t encourage that their dogs compete on these prairies is beyond understanding. Is it not now as it has always been, to win a Canadian Championship is such an accomplishment? Of course it is, at least to those that still put worth to the qualities it takes to deliver a prairie performance by a canine. The prairie chicken, sharp-tailed grouse, and Hungarian partridge are challenging for the best of noses. To pinpoint them correctly is a challenging feat. It is in true amazement one looks on at a dog that has accomplished this, after all these years I never grow tired of it. The country is vast but objectives are plentiful or there would be none of these wild birds. The lay in most cases allows the eye to see a performer for great distances. The grit and heart it takes to deliver there is above average and to do this cast after cast becomes something that truly separates an individual from his fellow canine contenders. The openness of the Canadian prairies seems to call for fulfilling by a dog. Seeing a dog do it right across those prairies, well it just doesn’t get better than that in field trials. The thrill of seeing a dog with the easiest of gaits seemingly glide for miles and whirl in one nose sniffing arch to a rigid poise is never taken for granted but damn near a miracle! Catching that scent from the ever-present wind pinpointing the flighty chickens or running Huns takes a good nose and a dog that has his mind on his business. The lift of noisy wings in the openness of the prairie tempts even the most polished to give chase. When it is done right what a thrill for the onlookers!

The lead up to these events was the start of the all-age field trial season. The Canadian Championships have been billed first on the circuit since 1902 with the inaugural running of the Manitoba, then the All-America Chicken followed in 1912 with the Saskatchewan in 1934, in 1936 the Dominion, the Great Northern in 1945, and the Border International and Elkhorn in 1951. The circuit continues through the United States until late March or so to finish the season. It should be noted in 1902 the Manitoba became the fourth all-age championship and when the All-America Chicken made its debut in 1912 there were five and it remained as such until 1916 with the National Free-For-All Championship’s inaugural running. The National (1896), Pacific Coast (1899) and Alabama Championships (1901) finished the tally for the first decade of this great sport. Four of these treasured Canadian championships continue on their homeland prairies: the Saskatchewan, Dominion, Border International, and Manitoba. The winning of a Canadian championship is the coveted feather in the cap of any owner and handler.

The titles and notable performances follow the canines from the north through the circuit as contenders demanding attention. Even after a dog is gone THAT win on the Canadian prairies is recalled, written about, and retains that IMPORTANT factor of a canine’s career. A derby that shines on the prairies crosses the border in the fall as a rising star, a “keep your eye on” contender. Youngsters worked on the prairies have a step up on others. This has been proven year after year.

The marks earned on the Canadian prairies are indelible, well worth the efforts by owners and trainers to give their dogs such opportunities. It appears that many excuses have been and are being made to avoid the test of the northern prairies, from economics to paperwork for the border crossings, they go on and on. Near the end of the 1800s the first dog trainers made the trip north without luxury of dually trucks, aluminum trailers, cell phones, or interstates but miraculously they made it. Taking at least a week to arrive with the early trainers having the dogs shipped by rail, their journey was not over when the border was crossed. Depending on road conditions (all dirt) they might or might not have gotten to a camp that day. The farmers would transport the weary travelers with their dogs by horse and wagon, in later years tractors were used. Knowing the benefits would be well worth all the efforts, those trainers and many more after them have and are still heading to those same prairies. There must be a reason!!!!

An article entitled How Bird Dog Champions Are Made scribed by Henry P. Davis appearing in Sports Afield in 1951 includes this: “Once a year, on the Canadian prairies, the finest American dog trainers, and the most promising canines come together to lay the groundwork for future field trial miracles.” Mr. Davis was not wrong about that then and the same holds true today. Duncan Barnes penned an article published the August 1968 edition of Sports Illustrated after visiting with Capt’n John S. Gates at his summer training camp in Broomhill, Manitoba. The article’s title Summer Schooling On The Canadian Prairies is self-explanatory of the content. A summary of it lies within a quote by Capt’n John while watching a derby sail across the prairie…muscles rippling, tail lashing, head held high as it takes scent off the wind: “That dog was a good one before we brought him up, but he’ll go home a lot better because he’s prairiewise. And a dog has to be prairiewise to be a major field trial contender.” 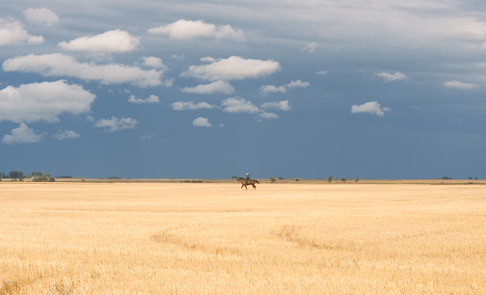