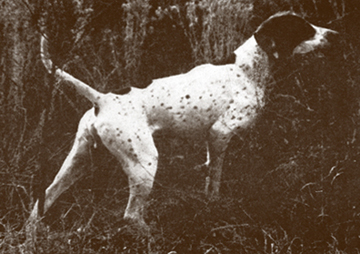 When the jaunty Traveler was put down in the very first brace of twenty-seven starters he laid down a heat, coupled with faultless bird work, which started low mutterings that he was being unfair to organized grouse labor. And when in the closing seconds of that driving heat he poured over a hill, tail cracking, to nail an old grouse that had good reason for thinking that he was a way over in neutral country, some of the wiser observers began calling up railroad stations to arrange for transportation home.

But the happy tradition-busting Traveler had his real race up his sleeve, a heat he laid down in the two-hour grind of the finals on Monday morning. It wasn’t a grind for him—he is no grinding dog. He sets a pace that is even and level throughout and then goes about his pleasing chore in a way that makes the observer feel that this could go on and on. Snow began falling midway the final heat making the footing extremely slick but it did not affect Tex. He just kept pouring along with the flowing power of a perfectly tuned engine….

Through this scene flitted Traveler feather-footed as a cat, noiseless and swift as a snowy owl. To see him, one had only to look in the right place. If not there, he would be in a minute. In simple fairness to the dog, it should not be said the Dr. Ziliak was the handler. Tex was doing his own hunting; the good Doctor was just out for a two-hour walk. Not once did a whistle go to his lips; he does not even carry a whistle. To those field trialers seeking an example of quiet handling, wherein the dog goes hunting with the least possible direction from the handler, we give you the combination of Dr. Ziliak and The Texas Traveler!

From the foregoing, it must not be thought that Tex was always near at hand. Far, far from it! No dog showed fleeter foot or greater range, yet he was swinging to the course with an uncanny sense of direction which prompted the thought that someone had kept him up all night, making him study a map of the area. Most important of all, he was hunting every jump of the way—and he was loving it!

As a matter of fact and for the record, many old grouse trialers, competent in their judgement, fell to wondering if Traveler was not laying down too big a race; that he might be too wide in his search. This could be answered in two ways: First, when a dog can hunt swiftly for two hours, covering his country like a blanket, yet show so constantly and regularly in the right places as never to cause his handler a moment of apprehension, then that dog is not too wide. Second: He was certainly much wider than the other (it is freely admitted), but that establishes no case against him. Are we to say, “Thus far and no further?” Are we to set up some fancied standard based upon the performance of some good and highly admired dog and then say: “Exceed this, and you are out?” A dog is never out when he exceeds the excellent. And this is precisely what Traveler did. He did not win his championship against poor dogs. On the contrary, he took on the best dogs in the realm of grousedom—and he beat them!

…In the field, Traveler has in abundance the four essentials for greatness: A superior nose; high intelligence; a sound body; and a stout heart.

On winning the Inaugural Quail Invitational Championship in 1940, William F. Brown had this to say about The Texas Ranger:

“Ranger covered the country like a windstorm, yet handled with glovelike ease…Ranger was the epitome of what is meant by a big running dog. He covers prodigious amounts of country yet handles with unbelievable kindliness. It was nothing short of incredible the way Jimmy would work the country out front, always appearing at exactly the right place and no matter the scope of his tremendous casts, he always knew where his handler, Jack Harper, was, and seemed divine what direction the course would turn.” 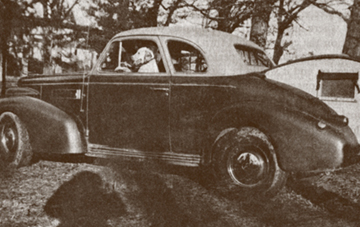 Ch. The Texas Ranger sits in the driver’s seat. Harper told a lady who wondered about having a dog in the front seat of a Cadillac, “he owns it, I just get to drive it.”