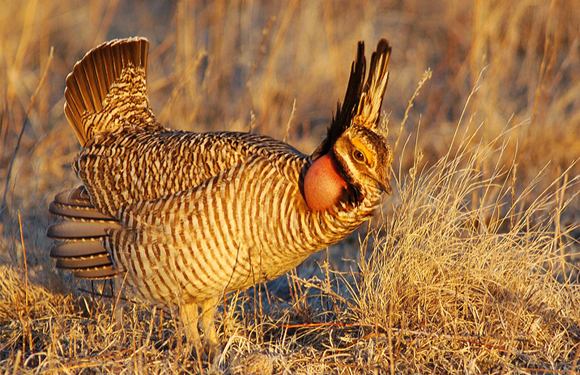 North American distribution of Pinnated Grouse (Greater and Lesser Prairie Chickens) once ranged from the Gulf Coast to Southern Canada, and from the Atlantic Seaboard to the Rocky Mountains, but this range has been steadily decreasing over the centuries. Of the three subspecies of Greater Prairie Chickens, the Heath Hen is extinct, and the Attwater’s Prairie Chicken on the TX coast is hovering on the brink of extinction. The bulk of Greater Prairie Chickens are today found in tall grass and mixed grass prairie regions of KS, NE, and SD with fringe and remnant populations extending into other states and provinces such as OK, MO, ND, and Ontario. In other states such as WI, IL, MI, and MN, populations continue to exist through reintroduction efforts. On the fringe of the distribution such as in OK, numbers have gradually decreased to a low in the mid 90’s, but have shown gradual increases during the last three years. While Greater Prairie Chicken numbers appear stable in some states comprising the heart of the distribution region, the latest counts indicate that today there are only about one-third as many of this species as there were just 30 years ago.