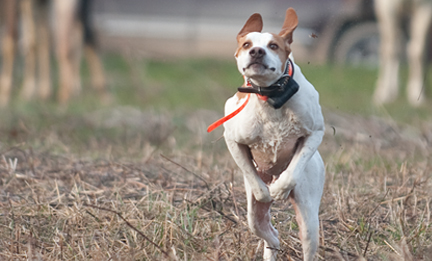 Connor’s EZ Button at the breakaway of the 9th brace.

This was my third trip to the National Championship, the two prior were in 2006 and 2007. I wanted to watch Strideaway cohort and friend Mazie Davis and her husband, handler Colvin Davis compete with one of their dogs. Patriote was scheduled to run in the 11th brace so I booked a flight. As luck would have it, several other dogs I wanted to see were drawn to compete during my stay. I was disappointed when last year’s champion, Touch’s Whiteout was scratched due to a shoulder injury.

The weather was most obliging with the only rain coming on Sunday. The rain, however, made for more mud and tougher going for the dogs in the days following.

The first brace I witnessed on friday morning was the 9th with the eventual winner Connor’s E Z Button, handled by Steve Hurdle braced with Game Maker handled by his owner, Fred Corder.

I first time I saw Game Maker was in 2006. He has qualified and competed in the National Championship every year since then. According to the brace synopsis on the Ames Plantation website, Game Maker has tallied 34 finds in the last five National Championships alone! This year could so easily have ended in tragedy when Game Maker was struck by a vehicle during the waning minutes of his brace. The dog recovered, finished the three hours and was rushed off to a veterinarian. A collective sigh of relief was heard when it was known that Game Maker had suffered no more than a few cuts and bruises. He truly exemplifies the steadfastness and courage in the best of our field trial bird dogs. 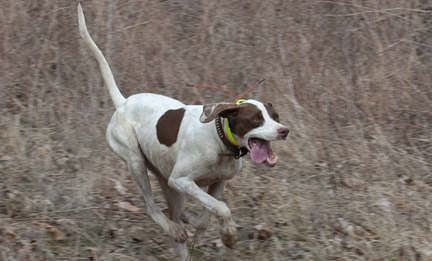 The other dogs I got to see were my friend Blake Kukar’s Survivor’s Little Bill handled by Randy Downs. I first met and photographed Bill as a youngster. Saturday afternoon, Coldwater Warrior handled by Weldon Bennett ran braced with Erin’s Special Force handled by Luke Eisenhart and scouted by Sean Derrig. I was very excited to watch Ben because he is a half brother to one of my females…their dam being Joe McCarl’s 7 x grouse champion Hard Driving Bev. He made a strong showing with a find and a back in the books but was lost to judgement shortly after a road crossing. Ben’s owner, John May, his wife and two daughters all rode the brace to watch their dog. I discovered that John originates from northern Maine and hunted grouse as a boy! 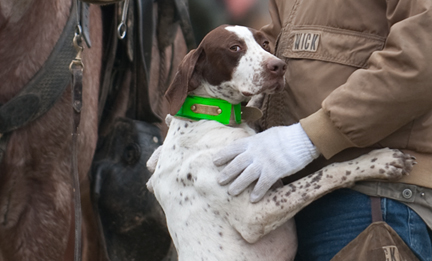 I also enjoyed watching the dogs I know from the Canadian prairies…the 2010 National Champion, In The Shadow whose owner Carl Bowman was on hand and Gary and Sally Lockee’s Patriote.

For anyone who loves bird dogs and has not been to Ames, a trip to Grand Junction, historic Hickory Valley and the National Championship should be on your list. If you compete in any kind of field trial, it affords a tremendous opportunity to watch some of the finest dogs in the country and to meet some of the most successful handlers, trainers and breeders. It’s impossible to fully appreciate the difficulty and understand the value of this grueling three hour endurance stake without witnessing it firsthand.

…And more welcoming and amiable people you won’t find anywhere in the bird dog world. They made me feel proud to be a part of this wonderful sport!

Thanks to everyone who took the time to do interviews — John Rex Gates, Colvin Davis, Jack Huffman, Sean Derrig, Ike Todd, Nathan Cottrell and Herb Anderson. There were so many others I wanted to talk to. What a wealth of bird dog knowledge convenes at the National Championship every year!