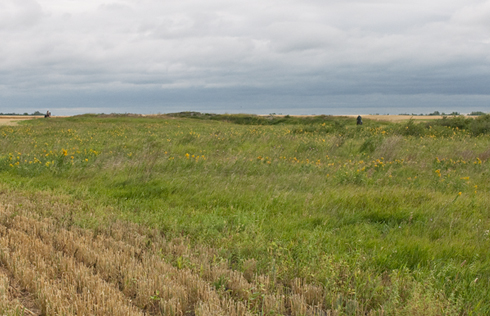 They leave early each July from a hundred places across the continent. They drive in a general direction, north — some due, some veering east or west — but all bound for prairie land, U.S. or Canadian. It had been so every summer since the late 1800s, when bird dog men discovered the magic of the vast open acres holding prairie chicken, sharptail grouse, the natives, and Hungarian partridge and pheasant, the imported exotics.

The lands offer training opportunities unrivaled and escape from the merciless heat of the south which in the winter offers the other side of the coin — temperate weather in the quail belt.

At first they had journeyed by train, their employers joining them at summer’s end in their private rail cars to shoot the gamebirds their young dogs had learned on. Then trials for the dogs were organized so the rich men could take home bragging rights and trophies and the trainer-handlers could earn a bit extra from the purses, meager then as now but conferring reputation, always a big thing for them and their employers.

The traditions formed proved enduring and the sport of bird dog field trials grew slowly but soundly, its devotees few but committed, fanatic even, the result of the abiding love of a man (or woman) for a good bird dog, that harbinger of joy for even the most cold hearted. The profession of trainer-handler remains a small guild of peculiar perfectionists, men (and women) who understand how to mold a bird dog to the curious qualities required by the sport — to search far and fast and forward, to point and stay pointed until found, and then to stay put as the birds fly away, as counter-intuitive an act as ever asked of an animal, except that asked of a Catholic priest.

Each summer for a century and a quarter the trainer-handlers have left home with the same thought — will I discover this summer The One — the dog of my lifetime, the super talent that will sweep the competition and make it and me immortal in the tight little world of our sport — a sport 99.4% of mankind will never hear of, much less comprehend. Most never find The One, but for a few who do life is never the same — henceforth they are special in The Fraternity.

Ask any of The Fraternity, and they can, from a list of bird dogs, pick the men who found them or from a list of the men name their dog, The One that got them to the pinnacle. To a few men’s names more than one immortal dog will adhere, but there will be but one who’s name and image leap to our first consciousness.

Here (in no particular order) is a partial list of people and dogs forged together in collective memory:

There are others. See how many you can name, and which named above are incorrect? For example, of the many great dogs of John Rex Gates, which would you (or he) pick as The One?