Ben Reach made a study of how fellow humans shaped their lives, for better and for worse. His fellow curmudgeon Sam Nixon MD shared in the study. Over breakfast at Millie’s Diner in Albany, Georgia they often discussed the fates of clients and patients from all walks of life in their region, the quail plantation belt, which stretched south through fertile pine and crop land to Tallahassee.

Discovered by rich Yankees shortly after the Civil War as an ideal escape from the icy winters of Cleveland, Boston, Chicago and New York, they bought up tracts of long leaf pine and cotton lands and converted them to sporting estates, devoted to pursuit of Bobwhite quail. The estates provided side benefits of fishing ponds and wild turkey to hunt in spring. Their descendants still owned many of the hundred or so trophy properties. The rest had been acquired by modern day tycoons from around the nation with wealth from media, technology, petroleum, banking, investment management, real estate and other forms of lucrative entrepreneurship.

Quail plantations fostered a unique culture in which the rich come-here owners and their guests were served by native crackers and blacks who worked as dog trainer-hunt guides, mule skinners, grooms, cooks, maids, butlers, gardeners and nannies (once known as mammies, a term now politically incorrect). 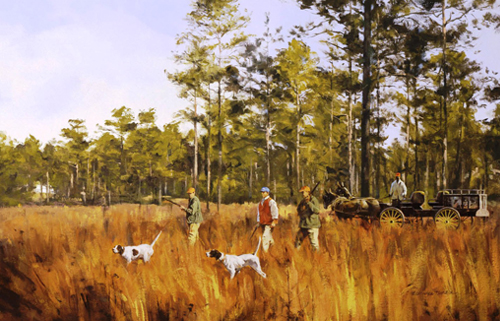 Walking In On Point, Eldridge Hardie

This mixture of very rich part-time resident owners and not rich but proud workers produced a Downton Abbey like culture reminiscent of Victorian Great Britain. Manners were important, and forms of address always respectful (if an employee addressed his employer or a child or guest of any age, “Mr.” or “Mizz” always preceded the name, whether a given name or sir name).

The employees expressed their pride through their competence. They put down broke pointing dogs (broke meaning steady to wing and shot). Their retrievers — Lab or English Cocker — seldom lost a runner and carried downed quail to the mule-drawn hunting wagon soft mouthed and proudly for delivery to the skinner, inevitably an elderly black man long in the plantation’s employ and with a collection of witty sayings and stories for shooting guests.

The employees taught the owners’ children table manners and how to ride a pony, then a horse. Later they taught them safe shooting and how to walk past a point, and never to shoot close over a dog’s head or close to another man’s ear. By their example they taught these children to be respectful of others, poor or rich. Or taught most of them. A few were too spoiled and ignored by preoccupied parents to absorb the subtle lessons.

It was out of concern for one of these wayward youngsters that Mose Green, skinner on Mossy Swamp Plantation, came to see Ben. After ritual inquiries about the welfare of one another’s families, Ben said:

Mose squirmed in the captains chair, his cap in his hands, then began.

“Mr. Ben, I has a concern about one of the boss man’s grandsons, and I don’t rightly know what to do about it.”

With that introduction Mose went on to explain that one of his own grandchildren (a lad he and his wife had assumed responsibility for after his single daughter became destitute) had told him of the owner’s sixteen-year-old grandson’s apparent addiction to one of his mother’s prescribed medicines.

“I feels a need to do something about this but I don’t rightly know how to go about it.”

Mose did not have to tell Ben his fears of getting his own grandchild or Mose himself involved in the family affairs of his employer. Those justified fears were clearly understood by Ben from a long lifetime lived in Southwest Georgia.

“Let me see what I can do about this, Mose. I am going to talk with Dr. Sam about it if you don’t mind.”

Mose often took Ben and Sam out on the millpond at Mossy Swamp after bream in the spring, and Sam looked after the medical needs of Mose and his family.

“Yes, Sir,” Mose responded. He felt no need to tell Ben to keep his own involvement confidential.

When Sam arrived at Ben’s office at five for their daily two drams of The Macallan 12, Ben told Sam of Mose’s visit.

“I have heard this tale of woe so often lately you would not believe it. Prescription abuse by patients and their children is epidemic, among rich and poor and those in the middle. And those in my profession bear much of the blame. Everyone expects a medicine to remove every problem and pain. When can you pay Robert Gaines a visit?” Sam asked.

Joanne called and arrangement for the curmudgeons to see Mr. Gaines at four the following afternoon.

“What do you two old Coots want this time?” Gaines said as his butler ushered them into the gun room. A bottle of The Macallan sat on the wet bar. Gaines held a half filled glass in his hand so Ben walked to the bar and poured two fingers for Sam and himself. Gaines was expecting an ask for some charitable project.

“Bob, we came to alert you to a problem one of your grandchildren may be experiencing.” With that introduction Sam told Robert Gaines the problem.

“How did you come to know this?” Gaines asked.

“We cannot tell you that. But it’s from a reliable source, and one without bad motives,” Ben answered.

“Thank you, gentlemen,” Gaines said. Ben and Sam put their glasses on the wet bar and started for the door. Gaines was devastated.

On their drive home to Albany, Ben and Sam pondered Bob Gaines problem. The next morning Sam got a call.

“Sam, how do I go about confronting this. The boy’s parents are divorced. They share custody. He’s in  boarding prep school. When he is away from school his time is split between the parents, mother lives in Boston with her second husband, my son in Manhattan with his second wife. The boy is a ball they toss. He is here as often as I can arrange it.”

Sam was silent for a minute as he thought.

“Can you get him here soon,”

“His school is out next week, and his father is set to take him for a golf weekend at the Homestead. I have been invited to join them. I declined, but maybe I can re-invite myself. The lad is set to go to camp as a counselor after that.”

“Let me get back to you. I want to talk with Ben about an idea we had as we drove home yesterday. I’ll call you by dinner time.”

The curmudgeons brainstormed for an hour. Then they called Robert Gaines and explained the plan. Gaines immediately embraced it.

Sam returned to his office and called a psychiatrist colleague in Augusta. He recommended an addiction treatment program and at Sam’s request called the facility to check for an opening. The typical period for resident rehabilitation for an adolescent was reported to Sam to be five weeks.

When in a week Robert Gaines flew from the Albany airport for the golf weekend in Virginia, Sam Nixon was with him. In a cottage at The Homestead the four males, one a sixteen year old, had a brutally frank discussion of the lad’s addiction. He admitted it and agreed to enter the rehabilitation program Sam and his grandfather had arranged. Then the four talked through a speaker phone with the lad’s mother in Boston. At first she denied, said the call was part of a conspiracy to wrest custody of her son from her. Sam’s quiet voice of reason soon had her agreement.

Father, grandfather and the lad flew on Sunday from Roanoke to Albany, where the lad entered treatment. A month later his grandfather drove to get him and bring him to Mossy Swamp. Two days later he left with the plantation’s dog trainer and Mose Green and his grandson for North Dakota in a two truck-and-trailer caravan loaded with horses and young pointers. 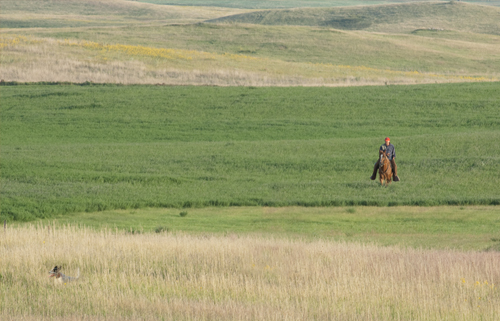 They would train on the prairies until the weekend after Labor Day, then drive home to Georgia, except For Robert Gaines’ grandson who would fly from Bismarck to Boston for a final year of prep school after a week with his mother. A year later he would enter Harvard, as his father and paternal grandfather had before him, but only after another summer of dog training on the North Dakota prairie with the crew from Mossy Swamp Plantation.

The fall Robert Gaines III entered Harvard, Ben and Sam paid his grandfather a visit at Mossy Swamp. Gaines was certain, after he got the call asking for the audience, that he was  about to be hit up for a major contribution.  That was not the curmudgeons’ mission.

“Bob, we are not here to ask for money, just to make a suggestion. Mose Green’s grandson will finish high school in the spring. He’s a fine athlete and a good student. We think you ought to help him go to Harvard,” Ben said.

Bob Gaines was silent for a minute. Then he grinned. He now knew the curmudgeons’ informants on his grandson’s addiction. 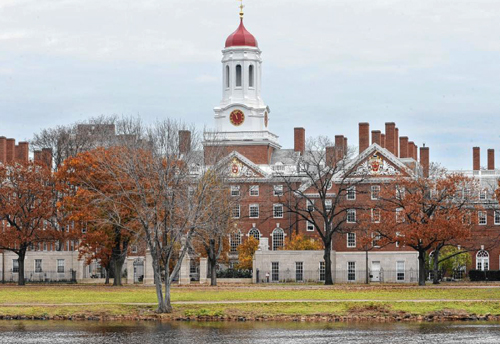