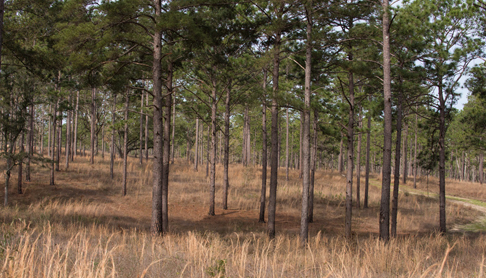 Ben could not believe Red Cool’s telephone message, left for him with Joanne.

Ben knew the current owner, Simon Cliff, held Red in high regard. He had won the Owners Trial three times for Simon, the last a good news-bad news event requiring Simon to replace the trophies retired at a cost of more than fifty thousand dollars, but bringing the plantation lasting honor in the peculiar culture of Southwest Georgia where great bird dogs held lofty status among owners as well as plantation employees, Cracker and Black.

Ben greeted Red with a firm handshake and a reassuring clasp with his left hand of Red’s right shoulder, then ushered Red into the library-conference room. Joanne poured them mugs of coffee and closed the door behind her on the way out.

“What’s the story, Red?” Ben opened without preamble. Red poured it out, and a bizarre story it was. Ben had heard many stories of unhappy endings of dog trainer tenures but none so strange as Red’s.

“It stated with the oddest assignment I ever got, and not one I wanted, I’ll tell you.

“Mr. Simon’s son Billy got engaged to a Boston young lady named Alice. She came to Bent Pine when the college year ended for a visit. She brought with her a Siamese cat, carrying it off the plane in a little hand bag with a zippered screen to breath through.

“Billy had ridden with me in the van to meet her at the Albany airport. We had with us Billy’s year-old English Cocker I had just started training (Billy had it with him at college since weaning). As soon as Miss Alice got in the van with that cat Rip (that’s the Cocker’s name) smelled it and began to growl. The cat began to hiss, and I knew we had trouble.

“Billy was accustomed to having Rip with him all the time but it became clear on the drive back to Bent Pine that wasn’t going to work during Miss Alice’s stay. Suited me fine because I needed Rip with me to start his training. I took him to my cottage for crate training.

“Miss Alice stayed a week, then flew back to Boston. July came and I was getting ready to go to North Dakota. That’s when I got the assignment. It came from Mrs. Cliff. I was to take with me Rip and Miss Alice’s cat. “Socialize them with one another,” Mrs. Cliff put it.

“I was planning to take Rip, but I had no experience training cats. My wife said training cats was an oxymoron, whatever that is.

“We started with the cat in a little crate along with thirty dogs in the trailer and it never stopped hissing. It hated all dogs, not just Rip, and the feeling was mutual. To quiet the dogs we had to put the cat crate in the cab of the truck and I had to listen to it hiss all the way to Columbus. It hated me too — I guess it smelled dog on me and figured me for a dog.”

Ben was having difficulty not laughing but knew he mustn’t. Red poured himself more coffee and Ben did likewise. Then Red resumed his tale of woe.

“By the time we got to Columbus I knew I was not going to be able to make friends of that cat and Rip. So I began looking for another solution.

“Turns out the daughter of the farmer on the property we train on was a cat person, had several she trained to be ratters in the big old homesteader’s barn on the place. She had a Siamese, looked just like Miss Alice’s cat. I asked her if she thought she could get her Siamese and Rip to tolerate on another and she said sure, she did that with all the cats she sold as ratters because the farmers and ranchers who were her customers had dogs of all sorts, stock dogs, pointing dogs, retrievers. I paid her $30 boot on a trade of Alice’s cat for the identical Siamese after she engineered a friendship between it and Rip.

“All seemed well after we got home from Columbus. Miss Alice and Billy were very pleased with the way Rip and Miss Alice’s cat got along. They planned on a Christmas week wedding at Bent Pine and things were real festive. Then Miss Alice got a phone call from a veterinarian’s assistant in Crosby, North Dakota.

“We’ve got your cat,” she said after Miss Alice identified herself. Seems Miss Alice’s Siamese had a chip implant. It had wandered off and been picked up off the highway and taken to the vet’s office.

“All hell broke loose at Bent Pine. I got called in by Mrs. Cliff. I made a full confession, nothing else to do. She fired me on the spot.”

“What did he say when he was told about the cat-switch affair?”

“I don’t know, Mr. Ben. I have not talked to him. I was ordered off the place when Mrs. Cliff fired me. I’m staying at my wife’s mother’s place.

It was exactly one week before Christmas.

“When is the wedding scheduled for?” Ben asked.

Ben was about to ask Red if he wanted him to see if he could get Simon to rescind his firing when Red said, “If you know of any openings for a dog trainer I’d appreciate it if you could put in a word for me.”

Ben said he would, and Red left.

Ben was a thorough cat hater, as was Sam. Ben could hardly wait to tell Sam about the Siamese Switch, which he intended to do at five when Sam arrived for his nightly libation. In the meantime, he told Joanne, who did not think the incident a bit funny (she was a cat person).

Ben called Simon Cliff in New York. He expected a cold response (Sam had called Simon a Cold Fish, a classification he applied to many Yankees).

Ben detected exasperation in Simon’s voice. “This is the biggest mess you ever saw,” Simon opened.

“Tell Red to lie low. As soon as the wedding is behind us I’ll rehire him. I can’t do it now without it costing me a divorce.”

Ben was not surprised. Mrs. Cliff was a known spitfire, but Simon called the shots on important things, Ben knew. He got Red on his cell phone before he had made it to his mother-in-law’s. He was greatly relieved, Ben could tell.

Three days later Ben got a call from Simon Cliff. There was elation in his voice.

“The wedding is off. Billy came to his senses. Alice was not the girl for him.”