Back to part-time attendance at field trials, covering them for a daily newspaper, I began to do some grouse hunting in the Nantahala and Chattahoochee National Forests in north Georgia and North Carolina.

Very few people of my immediate acquaintance did this in those days, and it was the last hunting I ever did that was bloodthirsty by nature.

Since two birds in a day’s hunting by two men was a bonanza to celebrate, I did the population no damage.

But I did learn two things. The grouse you hear drumming and that you see pecking around the logging roads left by the Ritter Lumber Co., at the turn of that OTHER century, are not the same ones that we hunted in season.

Those birds that aped my Buff Orpington pet hens were seeking cohabitation or were drunk on fermented grapes.

Never did I own a dog that “quit” in the hunt. But I had one good setter that just lost interest when the third bird he pointed flew ‘way down the cove almost to the creek for the third time.

Looking back on my brisk but close hunting Nemo brittany, I must say that some dogs are just temperamentally equipped to learn grouse hunting and some are not.

How the Texas Traveler, son of ol’ Jimmy, the Texas Ranger won the 1947 Grand National Grouse Championship, is a testament to the fact that Jack Harper’s great dog DID bring brains back to one pointer line.

Grouse hunting takes more brains than I had in those days. What I learned in those mountains is that, hunting ruffed grouse, you must have a truly gifted dog. Use of wind direction, whirling messages in the steep coves, caution in the rhododendron “slicks” are all necessary. And, a bell that stops its noisome trill. Definitely not something a dog or a man can learn in brief exposure. 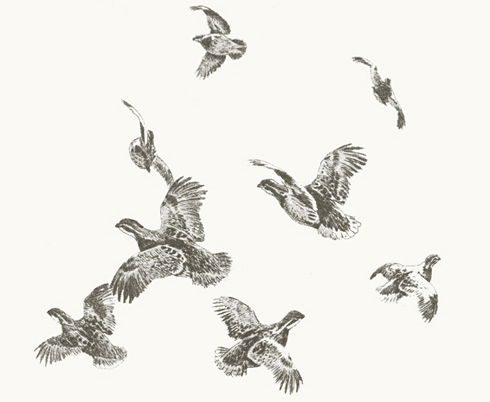 Soon, I left the daily newspaper and went to report field trials for Bill Brown at the American Field.

This took me to the prairie, where I promptly called the flight of a magpie for some poor trainer trying to flush a sharptail from a large willow bush.

This is not precisely true.

We cannot call what I did that first Canadian year “riding”. Since they variously provided everything but Ba’al’s Ass (including a washtub-hooved Bucephalus from John Gardner), I mostly CLUNG.

The second year I rode. By the fourth year in Canada, I bought me a horse and before I quit reporting, I had three up there, all comfortable and one very smart and the best horse I ever had.

One cannot see what one needs to see if one’s mount is trying to kill one. So I finally assumed a temperamental “diva” attitude. If they wanted the trials
reported, then provide a mount from which it could be done.

It made me unpopular at two venues, and, predictably, when I owned my own horses, these people whined about feeding them.

All part of the learning process.

Most important lessons I learned on the Prairie? I will probably not get them all collected.

There is no place to hide. The Big Sky is a Big Stage.

You can gauge how many knots the wind is blowing by how much the grass bends.

After 75 degrees, on the prairie, the ground is just Hell for the dogs. The worst judge I ever saw was a clueless paranoid who banned watering dogs. Temperatures soared to 90 one day, and I suggested everyone strike, and investigate and/or confiscate his canteens. He had two.

You cannot canter or gallop through a buffalo wallow.

Nobody cares when you are thrown from a horse, if you remain conscious. The only time I ever saw anybody get overly concerned at a prairie trial was when Harvey Butler dropped to his knees flushing birds at Stoughton one morning, and I jumped down and ran to him. He was dead. They were ALL concerned then.

Like Vegas, what happens on the prairie, STAYS on the prairie. I broke this rule every year I went up there. If it happened, and showed judicial or handler unprofessionalism, I reported it…including the scuffle between Edwin Brown and me.

Training dogs on the prairie is demanding and exhausting…much more so than in the south. It is very easy to make a mistake with a prized derby, and the most intelligent all age dog or shooting dog will go stale or sour if you do not know when to stop.

Young chickens are God’s gift to the dog trainer.

A handler who had won at Grand Junction trained on pigeons in Canada sometimes, for whatever reason.

But a close examination of all the grounds for the condition of speargrass (green or ripe and dry and no longer dangerous) is absolutely necessary on the prairie.

Aurora Borealis, and snow in late August are not rare where I went on the prairie. Neither is 105 in the shade of a haystack.

If you do not have a nose fringe on your bridle, a nose fly will cause your cayuse to break your back.

You can die in a hailstorm if you don’t get to cover and dismount. Hailstones as large as softballs scramble a horse’s tiny brain quickly.

Dogs never learn about porcupines, and once bewhiskered with their quills, they seem to defy the pain to try and kill them again. A few dogs point them and then blink them.

After I won an amateur all age stake in Manitoba, I decided I was ready for the big time, and put my hand to winning some trials, scouting and handling.

Many trials, errors and losses came before any successes. A lesson I learned from John Gates and Peck Kelley years ago brought one victory. The lesson
came as I was working a bitch, and she would not bend to our “course”. I chased her hell-for-leather, and caught a glimpse of them waving their arms and yelling. Thinking there was trouble, I interrupted my chase and galloped over. “Whatcha yellin’?” I asked. “Turn yo’ horse”, Peck said.. “Aw hell, I gotta get…”

“There’s y’ bitch right there, behind ya’!” John laughed. And so she was.

In 1962, at Collierville, TN, I was scouting for Ruth Franks in the National Amateur Quail Championship, and in the second series, one of the Tennessee gentlemen got her dog started backwards, and she sent me out. He was behind two fences. A judge steely-eyed me and said: “Do NOT lose that dog, Bill!” So, as soon as I could get the big pointer to look at me, I spurred the horse away from him, and soon he passed me, went to the front, had a clean find and won the silver.

My most frustrating two experiences, which nothing in my pilgrimage prepared me for were (1) when a judge watched me flush a huge wild turkey in front
of my tight, staunch, goggle-eyed bitch and reported to the other judge that I had an “unproductive”; and (2) when a stake manager handed his best buddy a title win by bringing out a box of tame birds and huddling them so his buddy’s dog could point, while buddy boy flushed and shot. The dog had pointed a single sharptail and had an unproductive in this National Amateur QUAIL Championship. Kansas Wind, no slouch of a pointer, and Sandhurst, my old pointer, had immaculate covey finds on natural wild quail and class races. So, should I have been shocked and surprised? Probably not.

I won the National Amateur Quail Championship in 1963 while paralyzed with a broken neck and Herb Holmes finished the last 13 minutes with one clean find. Henry Weil’s Lucy Jefferson could have— maybe SHOULD have—won that trial for Herbert Ingram.

It should be apparent that I have not been able to catalog everything I learned, as I learned, and from whom. I have named many of them here and elsewhere. Mine was a blessed and fortunate pilgrimage, with few regrets. Error and failure were my prime tutors.

The integral reality of the bird dog competitive experience is that all human judgment is forever personal, subjective, whimsical, and many times, despite the most earnest efforts of Angels, a mirror of all human experience in its unfairness and prayer for Mercy.