The resonating clink-clink of the Swiss made bell was audible from the distant covert. Familiar October sights and smells flooded my senses while the heavily white tri-colored setter explored for grouse perfume to surrender her forward progress. My mind wanders to the memory of picking out my first setter pup with grand grouse dog ancestry. I’d love to propagate this setter’s lineage, but I’m a grouse hunter stuck in the Wild West! The airline-cargo nightmares of shipping Canis familiaris to her prospective mate makes my blood pressure soar! Family and career commitments make traveling by car to a far-off northern state impossible. What if I could have the stud dog’s genetic blueprints shipped to me without all the travel hassles?

A basic knowledge of the canine estrous or reproductive cycle and understanding what specific diagnostic tests and exams are looking for will aid in your quest for the perfect litter. Domestic dogs are monestrus which means they complete one full cycle to the completion of ovulation per estrus (heat) cycle. Their cycle is not dependent on what time of year or season it is and they can cycle one to four times per year depending on the breed or individual bitch. The estrus cycle is divided into the four stages of proestrus, estrus, diestrus, and finally anestrus. Having a general knowledge of the canine estrus cycle can assist in timing the day of ovulation.

Proestrus which is the beginning of the heat cycle (duration of about 7 to 9 days on average) where the bitch attracts the male, but she is not receptive to mating just yet. During proestrus, her vulva will start to swell and a serosanguineous (reddish-blood and serum) discharge will develop. Estrogen is the main hormone that is regulating the behavioral and clinic signs of the bitch. Progesterone levels are low (< 1 ng/ml) and the cells seen under the microscope will consist of red blood cell, white blood cells, and normal vaginal epithelial cells.

Estrus is the next stage of the heat cycle and can range from 1 to 3 weeks in duration on average. This is the time when the bitch is receptive to the male. Hormonally, estrogen levels will begin to drop and subsequently progesterone levels will begin to rise. Later it will become apparent why we monitor progesterone levels when we artificially inseminate dogs. The vulva is still swollen and has a lighter pink discharge instead of the red discharge seen in proestrus. Estrus is complete when the eggs from the ovaries are ovulated and become mature for fertilization to occur. Vaginal epithelial cells seen under the microscope are mostly cornified and there is not a lot of “background” cells such as red blood and white blood cells.

Diestrus is the next stage to follow in the estrus cycle and can range up to 4 months in length. During this stage the bitch is no longer receptive to the male, and her vulva returns to normal with no visible discharge. Progesterone levels are at their highest concentration during this phase. Mammary development occurs at the end of this period prior to parturition or whelping of the puppies.

Finally, anestrus is the last phase of the heat cycle and this is the longest period lasting up to 4 months or more. During anestrus, the bitch is not receptive to mating and the estrogen and progesterone levels are at their lowest levels. This is considered a dormant or inactive stage of the canine estrus cycle.

Why is it important to understand the diagnostic test available and what their respective results mean to determine the day of ovulation? This is a great question to consider when managing the breeding in a bitch that is to be artificially inseminated or in one that has been difficult to get pregnant. When considering whether or not to artificially inseminate your bitch, several terms will be used by your veterinarian. Vaginal cytology, LH surge, progesterone levels, transcervical insemination versus surgical insemination, fresh chilled semen versus frozen semen, the list goes on.

Timing of ovulation is of critical importance when considering artificial insemination in the bitch because optimal fertility can be expected between 2 and 4 days after she has ovulated. The best way to determine the time of ovulation is to monitor her blood progesterone concentrations. During proestrus, the progesterone levels are very low (usually less than 1 ng/ml) until the very late stages. LH is a hormone from the pituitary gland that aids in control of the estrus cycle. There is an increase of LH at the very end of proestrus which is referred to as the LH surge.  This surge causes the follicles on the ovaries to rapidly mature and get ready to be ovulated. The progesterone levels at the time of the LH surge climb from less than 1 to about 1.3 ng/ml. Dogs will typically ovulate 2 to 4 days after this LH surge. Progesterone levels will reach 5 ng/ml once ovulation has occurred (Remember—optimum conception is 2 days post ovulation or 2 days post progesterone levels of 5 ng/ml).

Canine ova (eggs) are ovulated and must go through a maturation phase that can take 48 to 72 hours. So again the optimal time to artificially inseminate the bitch is 2 to 3 days after their progesterone levels have reached 5 ng/ml (which is the progesterone concentration at ovulation). In the average bitch this is about 12 to 14 days from the onset of proestrus or when she first went into heat.

Once determination of ovulation is complete, now it’s time to deposit the semen into the uterus.mThis can be done surgically or transcervically (across the cervix) via the usage of a rigid endoscope and fiber optics. Surgical AI is when the bitch is placed under general anesthesia and the uterus is gently exteriorized from the abdominal cavity and the semen is injected directly into the uterus. This is a fairly reliable method, but has the risks of anesthesia associated with it, and canine conception rates that vary.

A recently popular method of transcervical AI is now being used in many veterinary clinics around the US. This is a procedure that does not require general anesthesia and dogs seem to tolerate it fairly well with mild physical restraint. Transcervical insemination involves the usage a ridged fiber optic scope to aid in visualizing the cervix and gentling inserting a polypropylene catheter through the cervix to insert the semen. This is a very effect and safe way to inseminate your bitch without the risk of general anesthesia with relatively decent canine conception rates. 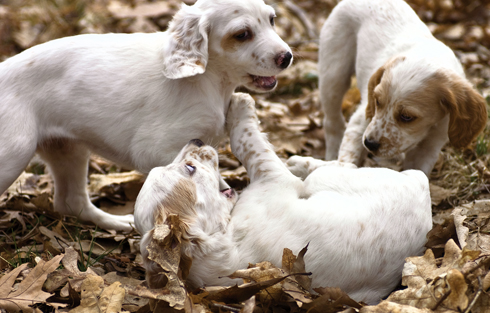 The other half of the equation is, of course, the collection, quality, handling and delivery of the selected sire’s semen. ”Canine Reproduction, Part II” will cover that topic.