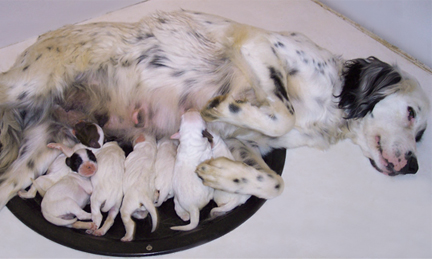 In Canine Reproduction Parts I and II we discussed the reproductive system of the bitch and stud dog. Now we are ready to have a litter of prospective champion bird dogs. All breeders should have a general knowledge of the normal (eutocia) canine birthing process and be able to identify a problem (dystocia) when it occurs. Early recognition of a dystocia can ultimately increase puppy survival rates.

Predicting the onset of parturition (whelping dates) in the bitch can be very complicated. Canine gestation from a single breeding can be anywhere from between 57 to 72 days. As was discussed in Canine Reproduction Part I, timing of ovulation by serum progesterone levels is the most reliable way to predict whelping dates. Dogs generally whelp 62 to 64 days post ovulation—remember that a dog’s serum progesterone on the day of ovulation will go from 1 to 2 ng/mL to 5 ng/mL. If you and your veterinarian are considering a delivery by cesarean, the timing of ovulation is crucial. I typically schedule a planned cesarean for 63 days post ovulation. Another reliable predictor of canine whelping dates is to do vaginal cytological smears and determine the exact date of diestrus. Remember that diestrus is when the bitch is no longer in standing heat and her vulva has returned to normal size with no discharge. Dogs generally whelp 57 days post-cytological diestrus.

Pregnancy can be diagnosed with an ultrasound at 20 to 30 days. I typically perform these exams at 30 days because I can see fetal heartbeats and evaluate viability of the fetuses. Studies have shown that puppy counts are rarely correct with ultrasound, and the most accurate counts are conducted with radiographs once the fetal skeletons have calcified around 52 to 54 days after the first breeding—which can be 20 to 22 days before the whelping due date.

As the whelping date nears, breeders should be monitoring their bitch’s rectal temperature consistently 3 times per day starting around the 54th to 55th day past the first breeding (be sure to keep a log). A drop of at least one-degree F in the bitch’s rectal temperature occurs 8 to 24 hours prior to parturition—98 to 99 degrees F. The temperature drop is associated with a decline in the bitch’s serum progesterone levels as the body physiologically prepares to give birth. The bitch’s rectal temperature will begin to rise back to normal after the initial decline—she should give birth in 8 to 24 hours. Other signs to monitor as the date nears are nesting behavior, which can occur 5 to 7 days prior to whelping and the appearance of milk in the mammary glands, which can occur as early as 14 days prior to whelping. Finally, a greenish discharge can pass from the vulva 1 to 2 hours prior to whelping, which is an indication of placental separation from the uterus.

Stage I of canine labor is associated with uterine contractions and dilation of the cervix. Stage I can last from 6 to 18 hours in the bitch. Clinical signs that may be associated with this stage can include loss of appetite, shaking and restlessness, panting and vomiting.

Stage II of canine labor is associated with complete dilation of the cervix and delivery of the puppies. Cervical distension causes the release of oxytocin from the pituitary gland, which leads to uterine contraction. Greenish vulvar discharge can be seen 1 to 2 hours prior to delivery of the pups, which is due to fetal placenta separation from the uterine wall. In general, pups are usually delivered every 30 to 60 minutes until whelping is complete; however, there can be 4 hours of resting in-between pups and be considered a normal delivery. Stage II is usually complete in 6 hours, but it can go on without complications for up to 24 hours.

Stage III of canine labor is delivery of the placentas, which usually occurs during stage II or up to 15 minutes postpartum of each pup. Retained placentas do occur but are very rare in my experience. The uterus begins to shrink in a few weeks and should be normal in size in 3 months. A vaginal discharge is fairly common for the 3 months while the uterus is returning to its normal size.

Dystocia is a term used that means abnormal parturition or whelping. Dystocias can occur for many reasons such as fetal oversize, fetal mal-positioning and posture, abnormal fetal development, and uterine inertia to name a few. Uterine inertia can be a resultant of (1) the cervix not fully dilating; (2) the uterus not responding to internal or external hormones; (3) the uterus just simply runs out of energy.

One of the most important things to understand, as a breeder, is when to call your veterinarian while experiencing a dystocia. I teach my bird dog breeders to call me if their bitch has been in active labor (strenuously pushing or having uterine contractions) for longer than 30 minutes without delivery of a fetus. I will have them administer 0.1 to no more than 0.25 mL (2 to 5 mg) of oxytocin as a subcutaneous injection and call me back in 20 minutes. If the bitch has not delivered a puppy, I have them come to the clinic to assess mom and her puppies. I will perform an abdominal ultrasound to evaluate the puppies’ heart rates and do a vaginal exam on the bitch. Fetal heart rates of 130 beats per minute informs me that I can try oxytocin injections once or twice more before going to a cesarean delivery. Whereas, fetal heart rates of 100 beats per minute or less mean the puppies are stressed and need immediate intervention.

Developing a general understanding of the events of reproduction and parturition will assist you as a breeder in having a successful litter of bird dogs. 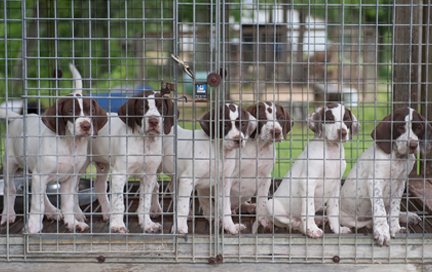