Casey Gets Called Back 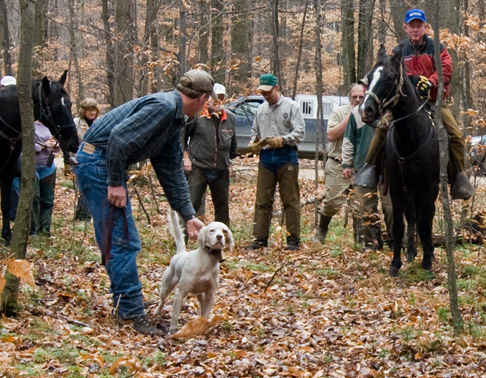 Things were looking dismal at the Mudtown trial that Fall.
The judges, with two braces left, still had no dogs at all.
Eight and forty dogs were drawn; done were forty four.
Five dogs posted bird work but their races all were poor.

Worse, though, was some info that the judges never knew
Field trials were in trouble at the Mudtown Trial venue.
“Champ withheld” four years in six, the records duly prove it.
Should no champ be named again, from Mudtown they would move it.

Hope doth spring eternal but the only hope in sight
Was hope that Mighty Casey’d be called back to set things right.
Casey with a slashing stride had run brace seventeen
Hunting every step with style, but not a bird was seen.

Camptown Joe was hunting hard and tearing up the brush
Birds were seen in flight though and he failed to stop-to-flush.
One flew right above Sworth’s head — he chased it like a pup.
Heads were hung in rapt disgust. The judge yelled, “PICK ‘EM UP!”

Then the final brace was loosed and series one was ending.
With no series two assured, disaster was impending.
Mandolin was running big and showing lots of power
Then at ten she topped a hill and left them for the hour.

Eddie’s Dream was ranging then, at 30, quite abrupt,
Came to heel and would not go. The judge said, “PICK HIM UP.”
Frowning were the judges with the last brace done so fast.
In their able hands the fate of Mudtown trials was cast.

Both of them deliberated brief, but very heated
Club officials, meantime, paced — unable to stay seated.
Hoping, praying, wishing hard with one big silent voice
That there would be a call back and that Casey was the choice.

Then at one they re-emerged. Judge Priestley cleared his throat.
All was deafly silent as he raised and read a note.
“Thank you for your patience; For we know it’s been unnerving,
Out of all the dogs that ran we saw but one deserving.
We have both decided and we only wish to see,
Casey, Mighty Casey in an hour on course three.”

Word then spread like wildfire when the judges’ word came down
From people that had heard it to the people in the town.
Till everyone concerned about the situation knew it:
If a dog could pull it off, Mighty Case could do it.

As the stated time drew near, a judge was overheard:
“He did it on the ground before, let’s see him on a bird.”
Tension was unbearable and time stood still that day,
For those who came to watch old Mighty Casey break away.

Then at two, the whistle blew, and Casey’s time was nigh,
His stride was long and powerful. A spark was in his eye.
He blasted through a briar patch and bounded up a hill.
Then his bell was stricken dead, and all was tense and still.

There stood Mighty Casey, he on point in regal pose.
Absolutely motionless save puffing at his nose.
A buzz shot through the watchers at the sight of Casey pointing.
Their hopes were pinned on Casey and he was not disappointing.
Up the hill the party climbed — a steady, hurried pace,
When suddenly a grouse exploded feet from Casey’s face.