There is an academy of thought to which I belong which has, as an article of faith, the feeling that one cannot learn how to judge anything as complicated as a dog’s performance by reading a book, or by dissecting a dog and learning all his anatomical and physiological problems and secrets. This tradition is ennobled in remembrance of Rowan Greer, who was the most conscientious man working dogs I ever saw. Possibly, he was also the most conscientious judge of his day, with more judicial equipment than most can ever hope to know—or even hear of.

* * * * *
Class is not just a high tail pointing, or just a motionless tail pointing that both of these mould into intensity—no, not just that.

Class is not only the gait of Miss Mary Doone, Hattie of Arkansas, A Rambling Rebel and Grouse Ridge Smokey. Although it is these, too.

Class is not just the never fail return of Safari, Stanton’s Victory, Hall’s Stonecroft Babe, and Ranger’s Spunky Pete, and their surgical survey of prairie or down south bottom edge. Although it is this, too.

Class is not simply the bird sense, the quail brain of The Haberdasher, or the cool of Fast Delivery catching a quail that flew in his face and releasing it alive without moving a hair or foot. Although it is this, too.

Class is the exuberance of Duration Bob, which, after George Crangle split his leg open at the beginning of a second series with George Evans for the Continental Championship in 1949, ran past Shore’s Brownie Doone on point twice while Earl Crangle (whom Bob disdained mightily) tried to salvage something. It is also the magnificent Brownie just standing there while Bob flushed his birds in that last cornfield, and winning. But it is not just these alone.

Class is Stanton’s Victory, possibly the greatest bitch of recent years, winning for Windy Weaver as a puppy, blanketing the field of derbies for George Rickard, and winning championships for Howard Kilk and John Gates in addition to many one-hour open all-age stakes with 50 to 69 dogs that would be championships today.

Class is all the things Vicky was when she was a young bitch, under Howard’s whistle the morning the Blue Northern blew into Brooks and Jefferson counties at Dixie Plantation.

Alvin Nitchman was in Korea and Paul Walker had just had four finds with Dust Devil for Nitchman. Warhoop Jake had done a really great job, and they wanted to finish the trial that day.

First it rained like a monsoon in a Somerset Maughan movie. Then the temperature dropped from 50 to 16 degrees in less than a half hour. Everbody quit except Howard Kirk, Freddie (his scout) and Stanton’s Victory, Dr. Earl Miles, the great surgeon, veteran judge and ex AFTCA prexy, W. A. (Dick) Dumas, George M. Rogers, and me.

I have been searching for George’s report… It was probably the best performance I ever saw by a bird dog.

* * * * *
So, when someone asks what “class” is, all true believers have a beautiful out if they do not want to get involved in the historical basis of its quest, or a long-winded, self-centered delineation of some things that go into it.

And if they communicate as they should with all the spirits of man and dog of yesteryear, and the unborn hopes of excellence, they will be truthful. For, class is in the eye and heart and intellect of the beholder who feels the weight of centuries of responsibility—ago and ahead. It is in choosing the best beholders that pass judgment that we preserve and elevate the ideal.

To read the entire chapter on “Class!’’ and many more pearls of wisdom, buy Bill Allen’s The Unforgettables and Other True Fables in our online store. 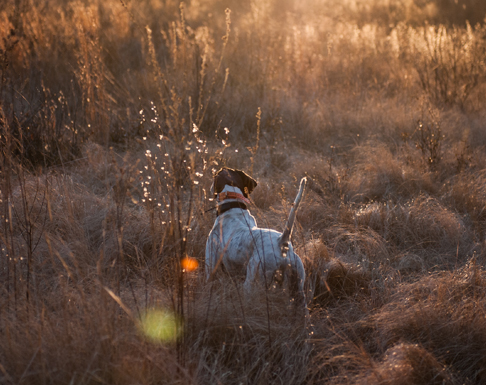