The crotch of a rail fence has long been an ideal place to let the rest of the world go by or watch dogs working afield.

“Dat white ’n’ liver pup ain’t never gonna be no good,” old Henry, a Negro sage, once informed this writer from his perch on the next crotch as we watched two young derbies follow an older dog through the sedge of a field below us.

“What makes you think so?” He comes from two of the best field trial Pointers that we’ve ever cut loose.” “Mabbe he do, but look at dem withers a bobbing up ’n’ down lak Miss Irene’s rocking horse. He ain’t wuth his training.”

Henry proved to be right; the pup was a washout for endurance. The reason was that he expended most of his energy in lifting his center of gravity rather than propelling it along the line of travel. His arc was not flat enough for effective travel. He fought a battle against gravity without progress. There are several structural factors, particularly in the forequarters, which bring about this result. Fatigue will cause a marked rise and fall of an animal’s withers no matter how good might be its angulation and conformation.

“Keep your eye on a horse’s withers,” a racing trainer told us once, “and you can tell exactly when he begins to peter out. No rocking horse ever won a stake race…he’s got to keep running level to bring home the bacon.” ……

We once saw a well known Setter cut loose at a field trial streak out across the open and into the cover, working it to the far edges, then swing back into the bird-field with more time than usual for combing that. All along he seemed to be gliding rather than galloping.

The very next brace brought out a dog which at a casual glance might have been his twin, but the moment he was cut loose the resemblance ceased, for even in the open he ran as if leaping a fence at each stride. He scarcely penetrated the cover, never reached the edges, cut the course and flopped into the bird-field just as the time limit expired. He had worked much harder every minute of the time but got nowhere except up and down, wearing himself out doing it.

The major cause of the excess rise and fall of the withers is improper conformation and angulation, especially the conforming of the front and rear assemblies to one another. Two factors, thrust and lift, are involved, and they must be synchronized for efficiency. Fatigue will eventually disrupt this balance in any animal and induce a pronounced rise and fall. 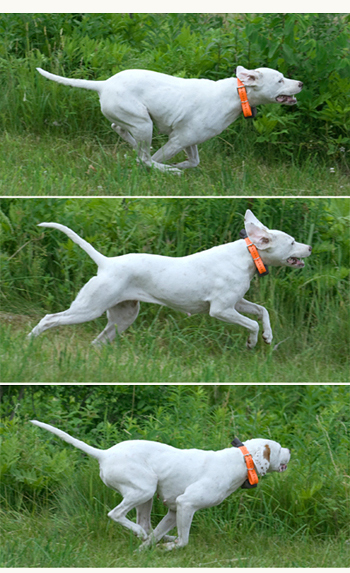 Well balanced front and rear assemblies allow this dog to run with an effortless gait.