In the early eighties I attended the National Amateur Quail Championship when it ran at Inola, Oklahoma. I was just starting to cut my teeth in the horseback game and wanted to watch some of the best dogs in the country. The lineup of dogs included White Knight’s Button handled by his owner, Jack Fiveash, Judge Lee West’s string of Barshoe dogs, and many other greats who were on the circuit at that time. There were more trucks that had the look of a Uhaul than there were pickups and the big horse trailers we see today. These trucks where customized with dog crates and a large area for the horses who were walked up a steep ramp into the back of the truck.

The performance that I have referred to many times as the best All-Age performance that I have ever seen was Addition’s Go Boy handled by his owner, Mr. Pete Frierson. Go Boy broke away, disappearing over the far-off horizon. Before long, point was called by his scout and, following a long ride to get to the dog, a large covey of quail was flushed. Go Boy was released again, made another far-flung cast and as far as you could see ahead, the dog was pointing again. After another long ride, we moved in on the motionless dog and a large group of prairie chickens lifted! This may had been around the 45 minute mark. Yet again the dog reached for more country and the call of point came from the scout. The dog’s style was perfect. As Mr. Frierson moved in to flush the birds, they lifted and went over the dog’s head. He turned and marked their flight, taking about one too many steps causing him to be disqualified…but the performance was unbelievable. It may have been THE ONE that headed me in the direction to the All-Age game as a breeder, amateur handler and now as a professional All-Age trainer. 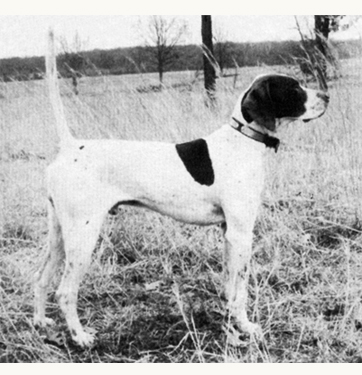 That year, The National Amateur Quail Championship was won by the great El Sauz Doll. The prior year, Addition’s Go Boy and Pete Frierson won runner-up laurels in the same event held at the Blackwater River State Forest near Munson, Florida in which Charlie Jackson’s pointer “Nitch” was named winner.

“Addition’s Go Boy, puissant ten-year-old white and liver pointer male has captured the 71st renewal of the National Amateur Quail Championship, the flagship event of the Amateur Field Trial Clubs of America. The celebrated veteran, owned by Mr. and Mrs. Pete Frierson of Clinton, Mississippi, was handled by Jerry Black in the 90 minute challenge during which he logged four finds to emerge victorious in a field of 46.”

The running was contested over the fabulous Chinkapin Farm of E. L. (Ted) Baker near Lake City, Florida. (commencing March 7)

“What is left to write about a dog which has already won eight championships outright and has been runner-up in fourteen other championship events?…

“…it is the redoubtable Addition’s Go Boy, the white and liver pointer — soul-of-consistency — has become ten years of age, despite which, in the period since the color insert (1987 American Field Christmas Edition) appeared he has won two of the four major National Championships sponsored by the AFTCA…”

Champion Addition’s Go Boy was inducted into the Field Trial Hall of Fame in 1990. Here is the write-up: AdditionsGoBoy_HOF_1990.pdf

Photo and excerpt courtesy of The American Field