I had the privilege of being asked to judge the Continental Championship in 2002. The performance of Barshoe Esquire, handled by Andy Daugherty, will always stick in my mind as one of the greatest all-age performances on wild birds that I have witnessed. Esquire ran in the first brace in the morning, which is usually good for wild birds, so my judging partner, Dale Bush, and I were already looking forward to a good heat and Esquire showed us that it would be by pointing his first covey at about 5 minutes. The dog had an uncanny way of staying to the front. Every time we thought he was gone, he was either on point or showed up front. I recall having him a long way to the front on one occasion and then after making a turn on the course, not seeing him again until point was called by the scout, Colvin Davis, in the same area I last saw him take the front. He had a woodcock find and handled it perfectly. His bracemate was picked up so Andy had the course to himself after less than an hour of the 1 hour 50 minute heat. I remember Andy gathering Esquire up just at the right time once as we rode into a tight turn through heavy cover. Dale and I were very thankful for Andy’s foresight to get him through that difficult part of the course as he was really running hard. He could have easily been lost there.

As soon as we got out of that area, Andy let him roll again and out of site he went. As you might guess we were a bit uneasy about him doing this now. To this point Esquire had shown us all the qualities we were hoping to see for a champion in this trial. As we continued, low and behold there he stood, high and tight on yet another covey of birds, his fourth out on a limb find! He just kept getting stronger and reaching farther and Andy just going along like it was just another workout. Dale and I got really nervous when we did not see the dog at about 1 hour 25 minutes after making a huge cast to the right near some really thick woods. Andy called and called to no avail and then went in search of him along with Colvin. We got on a hill trying to hear the call of POINT. Finally after a lapse of 10 minutes, which seemed like eternity, the called came from out front, which shook the trees. We and the gallery rode like we were at Churchill Downs to get to the magnificent statue of a dog standing down in a gulley with high head and tail. Andy got off, flushed his birds and asked how much time was left! I cannot remember exactly but I know it was less than ten minutes and we told him so. He turned Esquire loose and never hesitated to send him on. When he got to the end of a long cast rounding a field we called time and I believe it was about a minute or two ahead of the 1 hour 50 minute mark but we could not stand another suspenseful time hunting him up on point again. He had great 5 finds and a true all-age race. 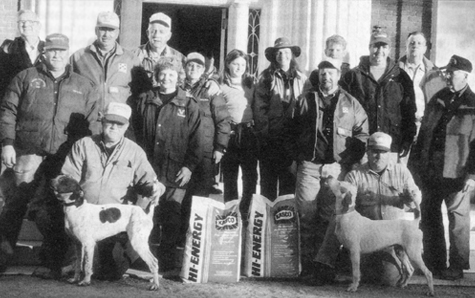 Courtesy of The American Field Publishing