The revival of the Saskatchewan Open Chicken Championship was on a high note and despite almost record-breaking temperatures, well conditioned contenders made stout bids for the prized crown. Flaming Star’s triumph will be hailed by setter fans everywhere. Many have been awaiting such a victory by the stylish longhair and to have him achieve the distinction under weather that would seem to wilt even the stoutest of heart brings an extra measure of gratification. 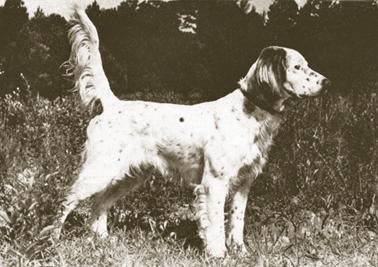 As has been said, the thermometer showed 95 degrees and what little breeze there was seemed only to worsen matters. But the gritty setter paid no attention to the heat and ran without a letup for the full hour, just as hard driving at the finish as when he started. He negotiated his country well, his casts were huge and directed intelligently to promising cover. He used the wind advantageously when he neared objectives.

Flaming Star’s first find was outstanding. It came as a result of a swing from a barren rise where he had completed a huge forward cast. Star, slanted across the gallery, well forward and headed for a pocket of bluffs; he did not show and a scout was dispatched to find the lofty setter on an inspirational point. The work was flawless. Sent on towards another series of bluffs perhaps an eighth of a mile ahead, he rounded the upwind edge and pointed again, handling more chickens perfectly. Star, for the remainder of the hour, ran to the limits of the course, finishing strongly over a far rise. 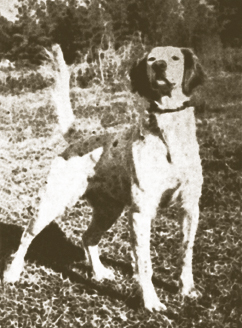 Reporter: David A. Fletcher. Photo and excerpt courtesy of The American Field