Of the half dozen or so really memorable performances I have witnessed, Grouse Ridge Storm’s 1994 win of the Grand National Grouse Championship at Gladwin, Michigan has to be one of them.

It was a tough stake — birds were really down for Gladwin. The judges were Dave Grubb from right there in Michigan and Ron Ashfield from New Brunswick. Dave, of course, had run on those grounds many times himself. If I remember right, the dogs got split up early on in the hour so Dave had Grouse Ridge Storm for the whole brace.

Storm, handled by Dave Hughes, ran huge. He had that kind of ground-eating gait and was on a mission from the first cast till the moment he was picked up. Every time I thought he was gone, he’d show to the front, right where he should have been and hunting every step of the way. At about the half, a grouse flew out of a tree and I remember hoping that wasn’t going to be Storm’s lost opportunity. It wasn’t. Maybe 12 or so minutes later, his bell stopped way out in front. We had to walk a hundred yards before we even saw him, standing tall, facing us still about 80 yards off looking bold and confident. As Dave started towards him, a grouse exploded from right in front of him and blew back over his head. Storm never flinched. It was a beautiful piece of work.

Of course, the dog was really on fire after that but still handled and showed when he was called on. I knew that performance was going to be hard to beat. They had four or five other good ones but nothing I saw came close so, in my mind, the judges got it right. 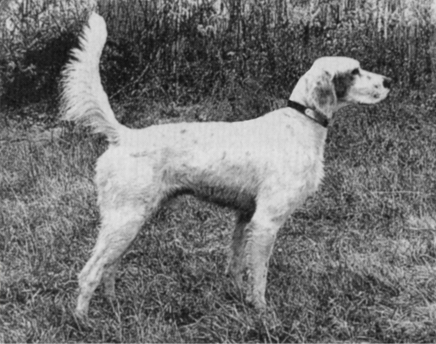 Photos, excerpt of report courtesy of The American Field