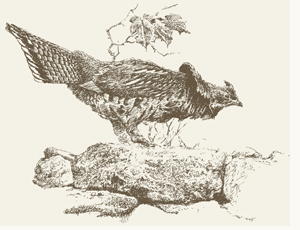 While other American game birds may well demand the respect of the confirmed grouse hunter, the present day ruffed grouse is far more of a problem for a dog to handle than any other. He is the craftiest of all our game birds with the possible exception of the turkey that hardly figures in the bird dog picture. In covers of ordinary size, a grouse appears to know when the gunner and his dog enter it, unless the wind is heavy. Hearing and knowing the point of intrusion, the bird appears to take stock of the situation immediately and lays a plan for escape should the intruders prove possible enemies. He may decide to run out to some convenient edge whence he can take wing should the pursuit turn his way. He may risk the chance of lying tight, trusting that he will be passed by undetected. Again he may wait until he is sure he is being sought and then run well ahead and flush while concealed by a protecting rise of land or a mass of cover. Yet again, should he be caught unawares, as he sometimes is, he will run ahead, not daring to show himself in the air, turn suddenly to one side or the other and then lie close where, likely enough, he will escape the nose of any but the most alert and experienced dogs. Careless dogs follow the trail easily enough but do not detect the sudden tangent until both they and the hunter have passed on. Then the grouse will either slip away afoot, or in a bold dash on wing that usually takes both dog and hunter off guard. There seems to be no end to the strategy of the grouse as he executes his masterly retreats. By comparison the quail’s tactics are simple and prescribed while the woodcock’s are little short of pitiful. It is only after a long experience in grouse hunting that those who follow the ways of this wise bird come to realize the problems of the grouse dog that is suppose to locate, point and hold him. It is only after long experience, also, that the dog itself comes anywhere near mastering the situation and becomes an exalted figure in the bird dog world.

This preeminent, highly recommended book for anyone who wants to further their understanding of grouse dogs, first published in 1942, can still be found at used book sellers like Alibris and Amazon.