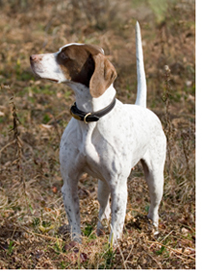 “There are many dogs that deserve the name of fair grouse dogs. But the outstanding grouse specialists are few and far between. They are possessed of some mysterious instinctive ability added to the standard requirements developed through experience from a natural talent.

Of such is the great grouse dog, a rare individual, that can be properly placed without hesitation on the pinnacle of bird dog development.”

On the afternoon of Tuesday, November 26, I received a call from my friend Joe McCarl. He was driving home from the vet. After a long, happy and healthy retirement, his 14 and a half-year-old Hard Driving Bev’s time had come. Joe always said she gave and taught him more than he could ever repay her for. On this day, he did what he could for her. I am grateful for both that she went without illness or suffering.

What brings a man and dog together like Joe and Bev we will never know. Fate had it planned. Hard Driving Bev was one of only two pups produced through a crossing Joe did leasing a female, Beaver Meadow McGee and breeding her to Champion Jeb’s V. D. He just had a hunch. The female pup was sold to a local grouse hunter. Two years later Joe received a call from the man asking if he wanted her back. She was too much dog. He nearly lost her several times including once on a trip to Kansas. Joe agreed to look at her. One glimpse at her foot speed and running style and Bev was on her way home. Late that fall, she began her long and extraordinary career with a decisive win, beating 54 contenders in the 2002 National Amateur Grouse Championship at Marienville, PA. No one could have imagined then what else she would accomplish particularly on those big pole timber grounds.

Bev posed a threat. Always. She did what few other dogs could. Heat, cold, rain, snow, wind — she never faltered, her mission always the same — to point grouse. King of gamebirds. She humiliated them. She did it with intelligence, independence, speed and style. She stood like a bull with grouse pinned directly in front of her almost daring them to move.  One of the greatest and rarest achievements in the world of birddogs is of an animal’s ability to extend the boundaries of performance we previously accepted as the limit. In the grouse woods, this special ability was uniquely Bev’s during her career.

To Joe, her crowning achievement came in 2003 when she won the 85-dog entry Grand National Grouse Championship again in Marienville. Those who witnessed her brace said she couldn’t be beat and she wasn’t. The accolades were accompanied by descriptions like “best performance ever witnessed in the grouse woods” and “superb effort capped by two spine-tingling finds”.

In 2005, she won the Ontario Grouse Championship and the prestigious hour Venango Classic where she pointed grouse twice in impossible weather conditions — driving rain and 40-mile per hour wind. It was reported that “Hard Driving Bev’s performance set a standard of uncompromising excellence that will exemplify the ideals sought in this stake.” Those wins qualified her to compete in the Grand National Grouse and Woodcock Invitational in the spring of 2006 where with “three consecutive superlative performances”, including “stellar work on grouse each day”, she captured the title. The following day, she competed in the hour Pennsylvania stake and was even stronger on the ground than the previous three days.

That fall, heading home from North Dakota, Joe entered her in the Minnesota Grouse Championship. Frigid cold temperatures, intermittent snow and 30 mile-per-hour wind gusts did not prevent Bev from handling and pointing grouse two times during her exciting hour, thus gaining her fifth championship title. A month later, under the judicial eyes of Harold Ray and Tim Perschke, she won the Grand National Grouse Championship for the second time. For Harold Ray to call a dog a genius is something rare. In 2008 she won her only runner-up title at the 80-dog Lake States Grouse Championship with five grouse finds late in the stake on the Gladwin grounds of Michigan. The following March, going on ten years of age, Bev won her seventh championship, the 2009 Ontario Grouse Championship at State College, PA. Joe’s decision to retire her soon after that high mark was made due to her increasing loss of hearing.

Hard Driving Bev won each of her championships with stellar performances and exemplary work on grouse. Only once was she credited with an unproductive that Joe wisely opted for after a brief flushing attempt when she was found standing at time during her magnificent performance in the 2003 Grand National Grouse Championship. She won the big stakes with big entries, defeating the best grouse dog competition with knowledgeable judges in the saddle — Harold Ray, Roger Hoover, Frank LaNasa, Tim Perschke, Marc Forman, Matt Mentz, Dave Bogle, Tim Tufts, Robin Frame and others.

I had the privilege of knowing her for much of her life and witnessed some of her thrilling achievements in the grouse woods. I also had the opportunity to watch her in Texas and on the North Dakota prairie. Bobwhite, blue quail, late season sharp-tailed grouse and running pheasants were no match to her bird savvy and intelligence. She pointed them all and ate up whatever country Joe put her in, but always mindful of him.

Bev was bred four times and never taken out of competition. She produced winners bred to three different champions, many of her offspring exhibiting her talents, particularly on game. Sadly some of the most promising dogs died young. The most successful field trial dog, no doubt, is Erin’s Special Force from the mating between Bev and Sean Derrig’s multiple champion Erin’s Tin Soldier. It was a thrill to watch Ben, handled by Luke Eisenhart, compete in the 2012 National Championship. I met Nick Thompson when he brought the dog back to the horse trailer after the towel was thrown in. “Lost on point,” was Nick’s opinion. Joe often laughingly said of Bev that she would get in your pocket if she could. Ben displays the same affection, a highly prized characteristic in top-flight all-age contenders.

Pure performance transcends the circuits. Over time, Hard Driving Bev’s influence throughout the birddog scene will expand through her offspring in the grouse and horseback circuits. Several of her grandsons and granddaughters are already champions in top-flight competition and the younger ones are showing great promise.

Good-bye for now old girl. The thrills and memories you left us with will never be forgotten. 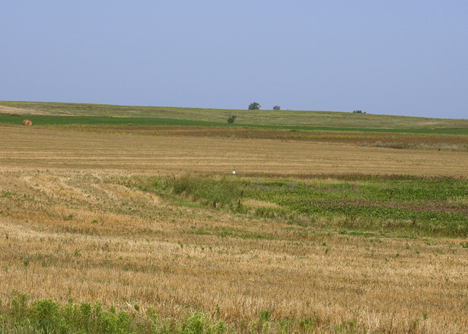 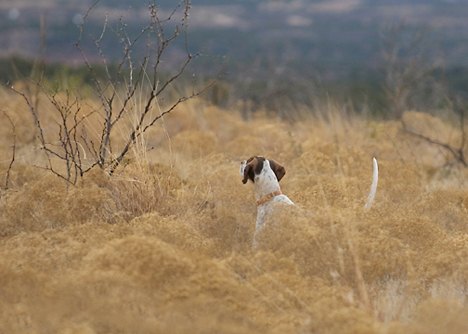 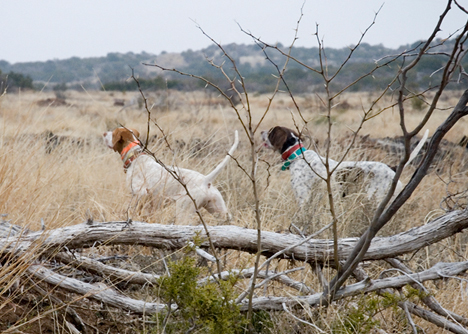 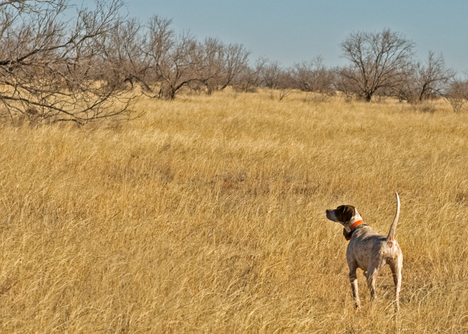 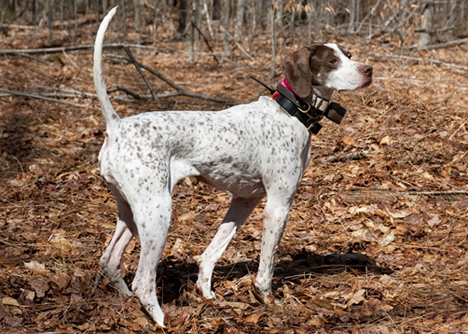 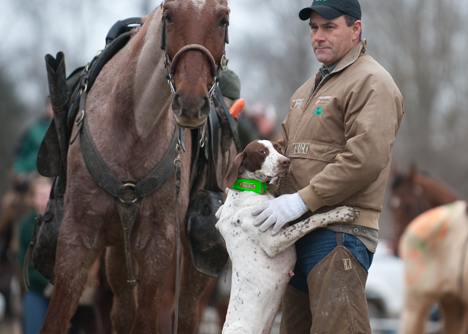