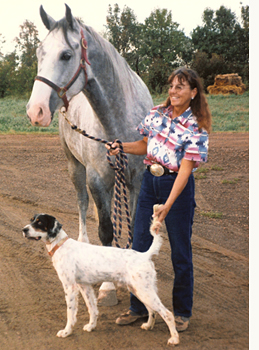 Sherry, for those few who are not familiar with her accomplishments, has been training bird dogs and has been involved with field trials for the past 47 years. She has owned and campaigned both English and Irish setters and was the first woman to handle the winning dog in a major open shooting dog event. She also won a Setter Derby of the Year award. Along with HOFer, Harold Ray, she was part of the illustrious Smith Setter team producing 25 champions with a combined 65 championship wins, including two National Shooting Dog Championships and four Top Shooting Dog awards.

CM: After so many years of training bird dogs and teaching other people how to work their dogs, what is the single biggest problem you see people struggle with?

SE: Well, I would say that too many people do not take the time to read their dog. Some trainers try to make a dog fit their training method instead of seeing that what worked for their last dog is not working for this particular dog. There is no one perfect way to work a dog. You must be able to read your dog and adapt.

CM: With many proven dog training methods available and good advice from books, seminars and videos…like your own, where is it that people get in trouble?

SE: You start a young dog with a method you have learned and that hasnworked for you but then, somewhere in the process the dog isn’t making the progress you think he should. At that point you need to evaluate what you are doing. You need to be flexible and not work the dog according to his age but work him at the speed he is comfortable with; sometimes you need to back up a step. I had a young pup that found a lot of birds but did not point them. The owner, very disappointed, had never had a pup that had not pointed birds by that age. I kept telling him she was different and that she would point when she was ready. That went on through the spring and summer. It took till that fall for her to want to point and not chase but when she had it all out of her, she went on to become a multiple champion. She was almost washed out by her owner just because she did not do what his other pups had done at the same age.

CM: What advice do you have for the novice or not so novice amateur, someone who has trained five or ten dogs but does not have your realm of experience to draw from?

SE: Even if you’ve worked hundreds of dogs, they’re all different. You need to really study that dog and try to figure out why he’s doing what he is and not doing what you want, then develop ideas to fit the problem. As a trainer, you need to learn to give in a little and go around the wall instead of trying to go through it.

CM: And in the dog’s mind, that’s not the same as giving in to his will?

SE: No, not at all, it’s just coming at the problem from a different angle, taking a different approach and outsmarting the dog. Sometimes it’s the smart dog that will give you the most trouble. The smart dogs also get bored faster; they need to move on to the next phase faster to stay focused.

CM: When you take a new approach, how quickly can you evaluate whether it’s working or not? Are you looking for subtle changes in the dog’s reaction to know you are moving in a positive direction or do you need to give the new approach some time?

SE: When you are having a problem getting your dog to do a certain thing and then change your approach to that problem, if it’s working, you will see results immediately because your dog will be happier at the end of your session and you will have gained a little. BUT do not expect to gain too much in each work out — that is a problem we all deal with when working dogs, being impatient and wanting to see big results too fast.

CM: Okay, what if you’ve done your best, you’ve tried everything you can think of but you’re still not making progress. Do you give up on the dog even though you like a lot about him and he has shown you potential?

SE: No I do not give up but I may put the dog up for a while or take him out to the field with all the other dogs but do not work him. Kind of letting him get his mind right also. You know it is a proven fact that dogs will watch what goes on with the other dogs in the kennel and get jealous. Other times I may consider letting someone else work him for a while to see if it

is just the two of us not getting along or if he has really got a problem that can not be worked out. I knew of a trainer that sent a pup back to her owner saying she would never make a field trial dog, that she did not have the drive. They brought her to me. I took her out four or five times, saw good potential and worked her for the next two summers. The dog now is a many time champion and continues to win. The original trainer has her back and thinks she is great. It just took a different approach to draw the potential out of her.

CM: Your last example brings up another question. It seems people are in a bigger and bigger hurry to get dogs to where they can win with them or have them broke to hunt over. To be fair, some trainers seem to have success with very young dogs. Do you think a lot of dogs wash out because they are brought along too quickly?

SE: In some cases yes, but to be honest I think a lot of dogs are washed out because they are not like the others at that age as I stated earlier. They are being compared to other dogs you may have or have had previously. Sometimes you can have a young dog that just wants to be broke. Tomoka won the Pheasant Futurity at 15 months with a broke find. Back in the 70’s that was unheard of. The dog was just ready to be steady and finished. Other dogs we had at the same time were five and six months older and still did not want to be finished.

CM: One last question, a much broader one…what do you feel are the most important challenges field trials face today and what can all participants do to better our sport?

SE: I think that field trials face a huge challenge getting more young people into the sport, also having good grounds to run quality trials. We need to have more fun trials and make a greater effort to get kids interested. Also we need everyone’s help in keeping the grounds that we have use of today, such as staying for however long it takes after the trial to clean up. We should write thank you letters to the owners of the grounds letting them know how much we appreciate their generosity. The most important thing we can all do is be good sportsmen and women.

Sherry has dedicated her life to bird dogs and the sport of field trialing as a successful trainer, handler, breeder and judge. Sherry and I had been emailing each other for a few years and I finally had the opportunity to meet her at the Bird Dog Museum during the 2007 HOF ceremonies. She was escorting the lovely and elegant late Edna Morgan. I remember thinking I was in the presence of two of the most extraordinary and respected field trial women of all time.