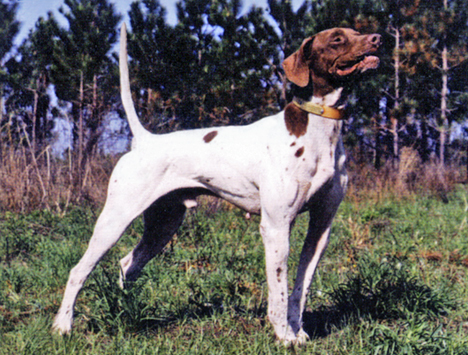 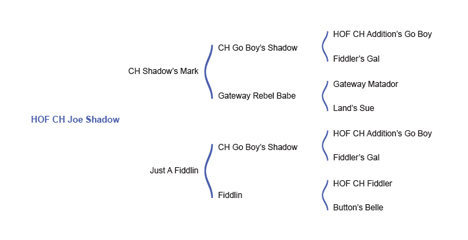 Joe Shadow’s sterling all-age propensity can be traced to his auspicious lineage, which derives from the wellsprings of Fiddler, Builder’s Addition, White Knight’s Button and the great blue hen Nell’s rambling On. He was whelped from a litter by Bob Shelton of Duncan, Okla., the mating between Shadow’s Mark and Shelton’s good bitch Just A Fiddlin bringing in the blood of Pete Frierson’s high ranking stud dog Go Boy’s Shadow up close top and bottom.

When Shelton disposed of the litter, he kept the precocious Joe Shadow, bird hunted and campaigned him through his Derby season, amassing four amateur wins. Joe was sent to Chuck Taylor in Western Oklahoma in September, 1996, where, as a first year candidate in the shooting dog stakes, he caught the eye of John Rex Gates. Quick to appreciate the dog’s all-age potential, he recommended that Robin acquire him for his string. Shelton was reluctant to part with the promising youngster, but, “not wishing him to fade away into obscurity,” agreed to the sale.

In the ownership of N.G. “Butch” Houston, Joe Shadow garnered several quality all-age placements under Gates’ hand, but it was his capture of the 1998 and 199 Florida Open All-Age titles that catapulted him into the limelight and put him in demand as a sire. His derbies and pups are beginning to prove themselves in the major circuit arena.

“I told Robin, I believe I would rather win this trial than any trial,” Houston said of the Continental Championship. “It takes a real good dog, not just a lucky dog, to win this trial. I’ve been running here for 22 years and I’m just tickled to death to win with Joe Shadow.”

The frost of early hours had faded and Friday morning was warming comfortably when Frontline Mick (Dileo) and Joe Shadow (Gates) were put on the line for Brace No. 4 of the callback series. Owners Dr. Tom Kennard of Jacksonville, Fla., and Butch Houston of Nashville, Ga., were on hand. Both dogs had made a definitive showing in the qualifying heats and were in tight contention for top honors in the eyes of their respective fans. They took the whistle hard and fast, going over the ridge from an open weedfield. Dileo, alerted by judge McInteer that a covey had raised, found Mick standing to the left at 2, the contact not witnessed and a stop to flush inscribed on the book. Both hit a powerful lick through the timber, hunted with speed and zeal past the double ponds, the race gaining tempo, the ground action hot. Joe delivered a series of slashing casts, pushing the course to the bounds. Gates urged the dusty-headed pointer on for a spell before calling him in for a drink. Both dogs were watered and loosed at 15.

They hunted the fringe on the ensuing cast, stood at 16 on a sedge-covered slope, Mick first to the birds, Joe taking a back. The covey had moved; a widely described relocation was called for to pin them again. They had run a good ways downwind on the hill, but Mick got them pegged in the end.

From there Joe took hold of the country once more and from this juncture on was a dog apart. Gates wisely allowed him to cut out his own ground. He was a casting a distant hardwood edge, barely in view, when he slipped through the brush. Scout Ron Smith found him in an oak bottom, pointing with consummate style. Quail scattered ahead as the gallery closed in; the remainder of the covey flushed to the side and behind, the dog contained and intent under fire. Off through the woods, he connected again, displaying the same militant pose that would characterize each of his finds, for Joe Shadow committed himself thrillingly. Gates ushered the bevy aloft; a second bunch lifted nearby. Mick was correctly engaged with a covey up front, but a subsequent stand produced fur.

They pattered opposite sides of the course beyond Kudzu Hill, searched high and wide but without reward for nearly an hour. Joe, courageously holding the edge in range and pace for most of the term, continued to bore at great depth through the front and scored a third time at 1:23, a spectacular, accurate find. Mick had been falling behind and suffered a short working lapse; a point at 1:26 turned up blank.

Joe challenged through the latter portion with the smashing fervor of a fresh contest, razor-sharp in his hunting and handling response, digging and swinging far to the front. At the top of the final fifteen he was making a long sweep through the woods behind an old tenant house when he anchored abruptly, keenly controlled for the flush and shot as the covey sprinkled back over his head. Gates threw him the reins for flying finish and the bold-going pointer called up his reserves, thundering over the cotton field and streaming across the far piney ridge, hunting away for the call. 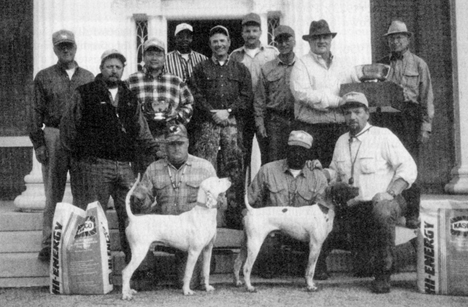 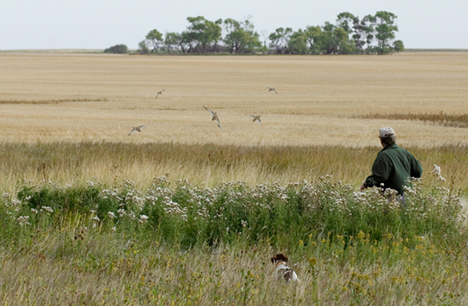 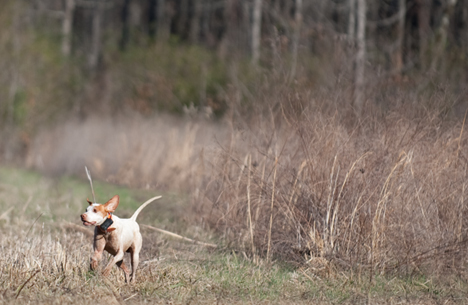 2010 National Champion In the Shadow, grandson of Joe Shadow. His granddam was a Silverwood daughter (Setag Maggie). 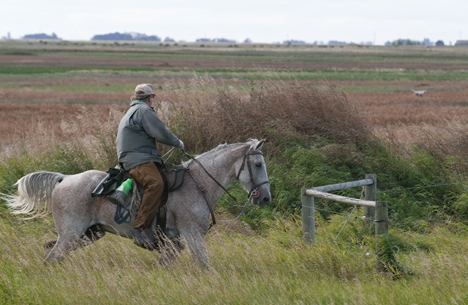 Littermate brother to CH In the Shadow, CH Distant Shadow with Robin Gates in the 2011 Pelican Open All-Age.

Joe Shadow’s promising career was cut short in the fall of 2002. He made the trip north with Robin in July. Earlier in the year he had had surgery to remove a growth. In mid-August he came up lame in his shoulder and it was suspected that he had torn something and sustained a spinal injury. His condition worsened quickly and it was soon apparent that he needed special veterinary care.

Roy Epp was at the Gates camp in Broomhill. He quickly packed his rig and drove the thirty hours to Albany, Ga., where the veterinarian determined that Joe required the services of a specialist. Surgery revealed a deadly malignancy along the dog’s spine. He died on August 21, 2002.

Joe Shadow was elected to the Field Trial Hall of Fame in 2006.