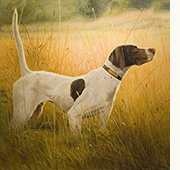 “…John Donaldson has something extra going for him compared to many gifted artists—he is a bird dog man, a breeder and owner, knowledgeable about field trials and field trial dogs, hence the authenticity of all his paintings. One thing that impresses the bird dog devotee is John Donaldson’s mastery not only of the technical aspects of depicting a dog in oil on canvas, but his ability to capture the character—the personality, if you will—of the individual canine. Those who own dogs that John Donaldson has painted offer that as they look at the picture, the pointing dog seems so lifelike that many vivid memories of experiences afield are triggered when they view the painting. As one owner said, ‘The portrait is so vivid, ol’ John seems alive and I find myself almost talking to him.’

That is the supreme accolade to be paid any portrait artist—that he has captured his subject completely, endowed his subject with lifelike qualities, and it is such praise that is invariably bestowed on John Donaldson’s art.” 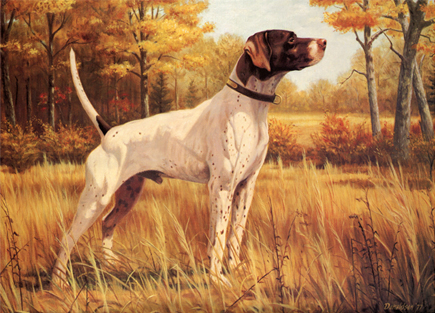 Readers of the American Field have been favored over the past twelve years to see several reproductions of the paintings of John Donaldson appearing in The Field.

Owners of the first place winners in the American Field Pheasant and Quail Futurities have been even more favored for they have been the recipients of original oil paintings of their dogs by the noted artist from Germantown, Maryland. Owners whose dogs have won the Purina and Norden Awards also receive a Donaldson painting of their winners.

John Donaldson was born in Springfield, Massachusetts. At age thirteen, after he and his family had moved to White Plains, New York, John received an Irish Setter puppy from his parents. That started his involvement with bird dogs.

John received his formal art training at the Art Student’s League in New York and the Pratt Institute in Brooklyn. Subsequent to his graduation from Pratt, he entered the business world as a commercial artist, eventually coming to Washington, D.C. where he joined a private firm.

Watercolor was his favorite medium and he soon gained considerable attention for his work. Despite his success and the security of the commercial art field, he looked for something else.

In 1959, John gave up commercial art and began to freelance. Slowly and steadily, his client list grew.

In the late 60s, a friend familiar with John’s ability with watercolors, asked him to do an oil painting of his champion bird dog. At first John resisted, then relented. What was there to lose? A few tubes of paint?

Those who own a Donaldson painting can attest that decision was a successful one.

The Purina and Norden Awards programs have commissioned John to paint the winners of those annual competitions.

John Donaldson served in the Army Air Corps during the war, with the 8th Air Force in England and France, and then moved to the Washington area in 1944. From 1944 to 1950, he worked for the Naval Gun Factory, for Reed Research, as art director, and for Ted Christenson Associates, also as art director. From 1950 to 1960, he was a partner in Design Directors before launching his career as a self-employed commercial artist. He also taught art at Montgomery College in Rockville.

John Donaldson died on June 25, 2005 at the age of 86. Work, not in private collections, is featured in the Bird Dog Museum, Grand Junction, Tennessee and The Museum of the Dog, St. Louis, Missouri. 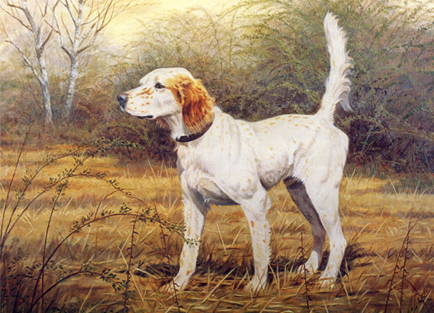 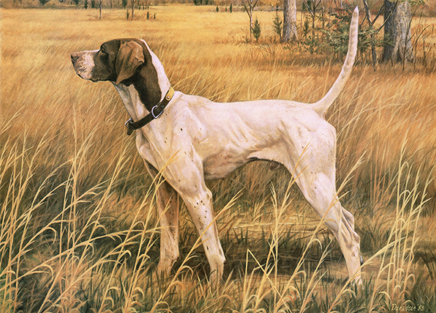